Depending on when you’re reading this, we’re about a week away from the premiere of Guardians Of the Galaxy, the next entry in the seemingly unstoppable Marvel movie universe. Unlike Marvel’s Avengers, the line-up the Guardians isn’t particularly well-known outside of comics fandom, although they’ve all had careers in comics. Some of the careers have been longer than others, but they’ve all had careers. 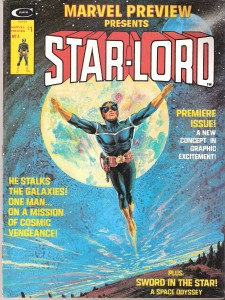 Star-Lord, the human adventurer played by Chris Pratt in the “Guardians” movie, first appeared in Marvel Preview #4, a black-and-white comic published in 1976. Some of the facets of this character have made it through to the present, but not all. Human Peter Quill is made into the legendary Star-Lord by an extraterrestrial entity known as the Master of the Sun. The primary power Quill receives is the element gun, which shoots seemingly endless amounts of earth, air, fire or water. As I understand it, Quill is still carrying the element gun in the movie.

In the comics, however, Quill is serving on a space station in the distant and exotic year of 1990 when he is recruited by the Master. Although the alien is cautioning against vengeance Quill’s main interest is finding the aliens who killed his mother.

This story was written by Steve Englehart, with art by Steve Gan. In his introduction, Englehart talks about how he cast a complete horoscope for Quill and used it to help him plot the story. His approach didn’t last long though. When Star-Lord returns several months later, it’s in a story by Chris Claremont and John Byrne, heavily influenced by space operas of Robert Heinlein and Poul Anderson. Star-Lord takes a back seat to a pair of teenagers, Kip and Sandy. However, Claremont and Byrne introduce Quill’s ship, a sentient entity in her own right, and present a modified version of what happened to his mother. This scenario includes the first mention of the planet Sparta, which is now the planet Spartax, which has a significant role in the current Guardians Of the Galaxy comic. ( Although it doesn’t seem to have a role in the movie.)

Writer Doug Moench, best known for his work on Batman and his original creations like Aztec Ace, wrote the next several appearances of Star-Lord, in the 1980s. These stories were published both in regular comic book and magazine format (although the magazine stories were in color too). He focused on complete-in-one-issue stories, with outrageous, high-concept ideas. My favorite features a generation ship that’s a full light-year long (And you thought Snowpiercer was big…) 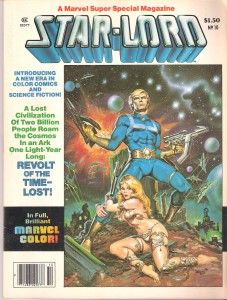 In the 1990s, Marvel commissioned novelist Timothy Zahn to re-launch Star-Lord ( Yes, he went there). Working with artist Dan Lawlis, he produced a three-issue limited series where a new character discovered Star-Lord’s weapon and ship.

Up until this point, it looked as though Quill was not a part of the mainstream Marvel universe. About 10 years ago, however, he was incorporated into the Marvel Universe, in the present, as part of an effort to generate interest in Marvel’s outer-space based series. Quill lost his ship, the only other continuing character from his previous adventures, but gained the Guardians of the Galaxy. His costume also completed his transformation from a fairly standard super-hero uniform to the outfit and helmet that will be featured in the movie. His personality has evolved from being vengeance-driven and what one editor called “twisted,” to being a good-hearted hustler and con-man. 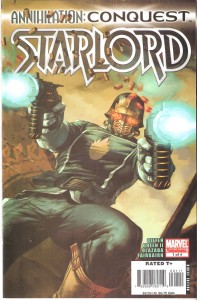 (Incidentally, it looks like Star-Lord has become the accepted spelling of our hero’s name, but for a long time, he was referred to as Starlord too. Sometimes both versions were used in the same issue.)

As part of the effort to promote the GotG movie, Marvel has launched on-going comics featuring Star-Lord and Rocket Raccoon, another member of the team. Rocket’s book has been getting the most attention, thanks to Skottie Young’s art and a huge print run for the first issue but don’t let The Legendary Star-Lord slip through your fingers. It’s written by Sam Humphries, a relatively new author, who has already developed a reputation for funky and eccentric science fiction, with Avengers A.I. and his creator-owned series, Higher Earth

One last note: Amazon says that a paperback collection of Peter Quill’s earliest stories will be out next week, to accompany the movie.