Welcome to the ever-growing list of the greatest science fiction novels of all time.

This week we are venturing back in time before many of the modern awards were conceived–a time when novels were still finding their way onto shelves. Science fiction at its core began with the short fiction found in pulp magazines. Later, longer stories began to appear as serializations in the magazines.

We have been compiling a list of the greatest science fiction novels of all time here in the electronic pages of Amazing Stories Magazine. We have been trying to judge each book objectively by focusing on the number of awards and nominations bestowed upon each tale.

The first three parts of our exploration selected novels published in the 1970s. This week we will venture a bit further back in time. We will target a novel that was written when fewer awards existed. It was written when many science fiction authors still relied on magazines as their first launching point for a new novel.

Before we get on with this week’s entry, let’s look back at our list so far. 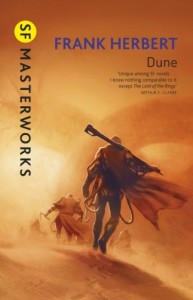 If you are a science fiction fan and have never heard of Dune, then consider this an early birthday gift. Go out and pick up a copy and add it to your reading list.

Science Fiction and Fantasy Writers of America (SFWA) Grand Master Frank Herbert originally wrote the novel as two shorter novels that were serialized in the pages of the magazine Analog Science Fact & Fiction. Herbert had grown a deeper understanding and appreciation for sand dunes through a research trip to the Oregon Dunes–that’s right the Oregon Dunes. Yes, that Oregon. 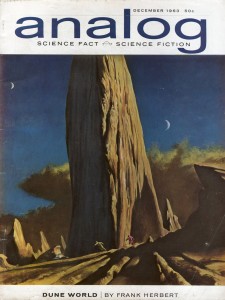 His research inspired him to begin work on two shorter novels he called Dune World and The Prophet of Dune. Dune World earned a Hugo for Best Novel nomination in 1964, meaning parts of Dune were nominated for two different Hugos for Best Novel.

After the two were wisely serialized in Analog, Frank pulled them together and began editing and combining them into what would become his masterpiece. He would later go on to write five sequels to the novel, but some would say that none of the sequels ever reached the same level of excellence as the original.

Since his passing, the novel has continued to gain sequels and prequels with the aid of his son Brian Herbert and author Kevin J. Anderson.

The original Dune is said to be the bestselling science fiction novel of all time. Estimates put the number of copies sold somewhere in the neighborhood of 10-12 million.

Hollywood has fallen in love with the book. The rights were originally acquired in 1971, but the proposed 14-hour film never made it beyond preproduction. After a decade of lingering in back rooms, the rights changed hands and finally made it to the big screen.

Filmmaker Dino De Laurentiis  turned to David Lynch to write and direct the film, choosing Lynch’s script over one written by Frank Herbert himself. The film was nominated for an Oscar, three Saturn Awards, and the Hugo for Best Dramatic Presentation. It managed to win one Saturn Award for Best Costumes. The award was presented by the Academy of Science Fiction, Fantasy & Horror Films, USA.

In 2000, Dune was again adapted by Hollywood, this time for the small screen, appearing as a miniseries on the Sci-Fi Channel. The series remains one of the highest rated showings on the cable channel. It received nominations for the Saturn Award, Primetime Emmy, ASC Award, C.A.S. Award, Golden Reel Award, and the Hugo Award for Best Dramatic Presentation. The Dune miniseries won two Primetime Emmy Awards and a Golden Reel Award.

In 2008, Paramount Pictures planned another run at a big screen release. With escalating production costs, the studio executives were looking for a script they could hold under $175 million. Unfortunately they were unable to wrestle the script into a workable adaptation, so the project was abandoned. We can only hope that someone will eventually solve the riddle of Dune and bring a modern adaptation to the big screen (or perhaps an HBO series).

Besides Dune’s success in Hollywood, it has also managed to find its way into numerous computer, board, role-playing, and card games. The world Frank Herbert created six decades ago has a depth that lends itself to infinite possibilities.

The novel itself paints the story of humanity’s far future–a future where great houses plot and scheme their way to power, and religious sects manipulate bloodlines to spawn the ultimate human, the Kwisatz Haderach.

The planet Dune is at the center of the struggle for control of the known universe. The desert planet is the lone source for the spice mélange. The spice is used for travelling great distances in space and for unlocking higher thinking in the human mind. Mélange and the struggle for its control reminds some of the struggle for oil in the Middle East of modern day Earth.

Frank Herbert delivers amazing action, eye-opening insight, and a wonderfully twisted plot. The complex world he created includes a detailed government, religion, and ecology. The depth of his characters are on par with the greatest novels written in any genre. Dune offers something for every science fiction fan to savor.

Frank Herbert’s Dune is one of the greatest science fiction novels of all time.