Welcome to the ever-growing list of the greatest science fiction novels of all time.

If you are just joining us, I’ll give you a brief recap. We are slowly assembling a reading list of the best novels the industry has to offer. Our goal is to put the list together in an objective manner rather than basing the list on personal opinion. We are using awards given to each novel as the foundation of our list. Of course this strategy is a bit flawed since the awards originated in personal opinion. We hope that the sample size of opinions will help to dilute the subjectivity and push us towards objectivity. Awards are not the only criteria, as you will discover, but they are the starting point.

As we continue our exploration, it is best that we take a step back and examine the awards that are being used as the foundation for selecting entries in our list. 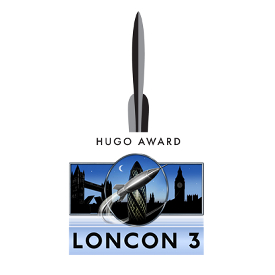 The Hugo Award for Best Novel was created by fans in the 1950s and stands as the oldest recognition for excellence in the industry. Our objective criteria of evaluating novels based on awards falls apart before the 1960s because the Hugo was the only show in town.

The 1960s witnessed the creation of the Science Fiction and Fantasy Writers of America (SFWA) award known as the Nebula. The members of the SFWA vote for the award. The Nebula Award for Best Novel represents acceptance by an author’s peers, while the Hugo reflects the voice of an author’s fans.

The 1970s brought along two more prestigious awards. In 1971, Locus magazine allowed its readers to vote for the novel they thought was the best. The Locus Award for Best Novel morphed into two awards in 1980 when the magazine began handing out trophies for the Best SF Novel and the Best Fantasy Novel.

The Center for the Study of Science Fiction at the University of Kansas presented the first John W. Campbell Memorial Award for Best Science Fiction Novel in 1973. The award differs from the others in that it is selected by a jury. The jury is comprised of a group of science fiction experts and is intentionally kept small enough that every member of the jury can discuss each nominee in an open forum.

These four awards (Hugo, Nebula, Locus, and Campbell) represent the cornerstone of our selection process for the greatest science fiction novels of all time. Other criteria for addition to our list includes other awards, critical acclaim, status of the author, and commercial success.

We will first add to the list from the period after all four awards were created. Later we will push back further in time to select novels from earlier decades, when the criteria may be less objective.

Please remember that our list will not crown a single novel as the best of all time. That cannot be done objectively. Entries in the list appear in no particular order. Below you will find the current list and this week’s new entry. I hope you enjoy. 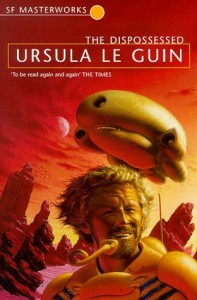 The Dispossessed is a masterpiece written by Science Fiction and Fantasy Writers of America (SFWA) Grand Master Ursula K. Le Guin. Many consider the work a compelling example of a science fiction utopian novel.

The story is set within Le Guin’s series of novels called the Hainish Cycle. The novels in the series take place in the elaborate universe she created.  The Dispossessed is the novel in which Le Guin first creates the Ansible, a device for communicating across vast distances. Today the device can be found popping up in various works of science fiction by other authors and has become a set piece for the genre.

Last year I had the opportunity to interview Ursula regarding The Dispossessed. I asked her where the idea for the book came from.

Ursula replied, “Part of the origin of The Left Hand of Darkness came from thinking about what kind of people would never have had a war. I kept on thinking about war and peace, about violence and nonviolence, and reading about it. I read Gandhi, and then the anarchists such as Kropotkin and Goodman. I found nonviolent anarchism a very useful way of thought that fit in with the Taoism I picked up as a kid. And nobody had ever written an anarchist utopia. So I did.”

The novel she wrote explored life on two separate worlds, Anarres and Urras. The chapters alternate between action on the two different planets. The story explores life in an anarchist society through the many well-developed characters that Le Guin vividly paints. Along the way she tackles social issues while also toying with scientific and technological ideas.

In addition to winning many science fiction awards, the novel found critical acclaim outside of the science fiction community, receiving literary recognition because of its exploration of important social topics. Many schools have added it to their required reading list.

With the exploration of social and scientific ideas, The Dispossessed has forever put a mark on science fiction.