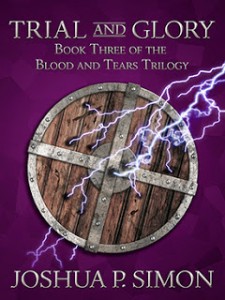 Reading Trial and Glory, the final installment of the Blood and Tears Trilogy, was like visiting with old friends, the characters were that well defined. I reviewed some of the short fiction associated with the trilogy last year as well as interviewing Mr. Simon.

The book has been out a while, and I’d like to apologize to the author (who was kind enough to provide a review copy) for taking so long to get to it. I can’t read as many books in a month as I could in the years BC (Before Children) although I still try.

I’m going to restrict myself to a very broad description of the plot to avoid spoilers and instead discuss some of the things I liked about the novel, but as an independent book and part of a larger story arc.

The novel opens with Queen Elyse and the Hell Patrol facing an overwhelming army. They’re under siege, and things don’t look good. If they manage to survive, and that is anything but certain, there is a world of intrigue going on back at the palace. To complicate matters, Elyse’s growing relationship with Kaz hits a roadblock when he begins to remember his life before he joined the Hell Patrol, including his wife Lucia. And his brother Tobin has his hands full with a rebellion back home.

Dialogue is one of Simon’s strong points, and he uses it effectively to define who his characters are while at the same time moving the plot along. The men and women of the Hell Patrol genuinely care for each other, and it shows in the little details of their conversations. There’s a gallows humor that comes forth in their banter at times that seems appropriate for a group who may not live out the day.

And that’s one of the things I like about this series. There are a number of dark, almost oppressive fantasy novels and series out there where the characters are not people I would want to associate with. Now in a well-written story with a strong cast of characters, there should be some you wouldn’t want to spend time with in the real world. There are some of those here. But I’ve read some highly acclaimed novels, titles not to be mentioned, in which I couldn’t stand any of the characters, including the hero or heroine.

That’s not the case here. As more than one character points out, the Hell Patrol is a family. An unusual and at times dysfunctional family, but they truly care for each other. They share a camaraderie that’s missing from much other fantasy.

The other thing that I particularly liked about this book was the way Simon resolved the story arc of Tobin’s relationship with his brother Kaz. There were so many ways the situation could be concluded that I was guessing all the way to the end. I had no idea what to expect. I’ve not often seen an author set up a situation where the outcome wasn’t clear cut pages in advance. I didn’t expect it to happen the way it did, although I had suspected something along the lines of how the resolutions affected his wife Lucia. Just not quite the way it did.

If there was one place where I did feel the book could have been stronger with the story arc involving the scepter. I thought it was dealt with a little too easily compared to how much the heroes had had to struggle through the rest of the story. However, I can live with it. Not everything in life is a struggle.

Trial and Glory wraps up a solid epic fantasy trilogy. In his afterward, Simon says Trial and Glory is the last novel set is this world. I hope that turns out not to be the case. In the epilogue, there are two guys heading into the Quoron Empire. I suspect therein lies a tale…