In this week’s viewing: It’s an uncommonly good start to the new season! 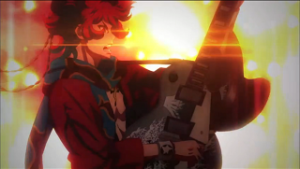 Samurai Jam – Bakumatsu Rock premiere – Ryōma Sakamoto wants to teach Japan to rock. He carries a burning passion for music and a special guitar given to him by the guru who recognized his potential. Unfortunately, he lacks the social connections necessary for official permission to perform, and the paranoid Tokugawa regime doesn’t look kindly on foreign music anyway. Soon he’s being hunted down by a special anti-rock police squad, and tangling with two other students of the same teacher who don’t recognize his right to carry the guitar. But the power of rock will conquer all!

The show offers no explanation and no apology for taking the trappings and technology of modern rock concerts and plonking them down in the middle of 19th-century feudal Japan. The opening scene shows men and women in traditional kimonos waving glowsticks as they watch a pop group projected on a giant video screen, and it does not get any less historically unfaithful from there.

If you can make it past that, then the only real complaint left is that there isn’t nearly enough actual rock in it– Ryōma is always ready to perform, but constantly being interrupted by one thing and another. As for the rest, there are no annoying characters, we have the beginnings of a plot, and the art is really nice. So far, this could be a slightly guilty pleasure. 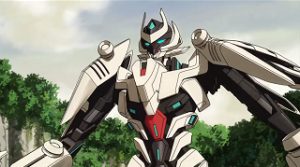 Argevollen premiere – In a time of war, young soldier Susumu Tokimune suddenly finds himself at the controls of a mecha such as his world has never seen before.

If that sounds like every single mecha show ever, it’s because this is the most generic mecha show ever produced. The two countries at war are a bunch of people in suits and uniforms such as you see in any kind of military anime. Susumu’s comrades don’t even have character quirks to distinguish them yet. If your only requirement is that a show contain giant robot fighting suits, then there it is. 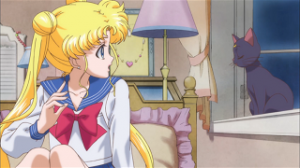 Sailor Moon Crystal premiere – Usagi Tsukino is an awkward girl and a bad student who’d rather play arcade games than study. Her latest test score is so bad that her mom locks her out of the house. (To viewers in achievement-oriented, low-crime Japan, this will not look like child abuse.) Usagi wants to be a princess or a superhero, and the latter suddenly looks achievable when a talking cat informs her that her destiny is to fight evil…

The thing that really stands out about this flashback to the 1990s is how unabashedly girly it is. Usagi plays the odd video game, but her other interests are princesses and jewelry and that cute guy she bumped into outside the jewelry store. Her invocation to turn into Sailor Moon is a call for makeup. A grim, hard-bitten action heroine she is not.

There aren’t strong hints of the greatness that captured the hearts of viewers in the original show yet, but it’s not bad so far. 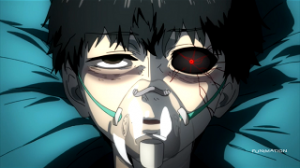 Tokyo Ghoul premiere – Ken Kaneki has a date with a cute girl who loves the same books he does, but it turns out she’s a ghoul, a creature that eats humans. When both of them are attacked, she’s killed and he’s saved by a transplant of her organs into his body. The changes him into a ghoul, impervious to ordinary weapons, unable to eat normal food, filled with a craving for human flesh.

This is not one for the squeamish. Most of the first episode covers Ken’s struggle against the urge to feed on humans, which he must inevitably give into if the story is to continue. Although he’s spared having to kill for his first meal, there’s no getting around the fact that he must consume a dead human or die.

The writing is good, but this show doesn’t spare the gore. 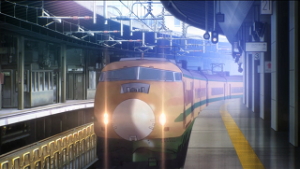 Rail Wars! premiere – In an alternate Japan where the railways were never privatized, one of the dreams jobs of a railfan is to work for the rail security force. Trainees will have to be familiar with everything from the best way to shovel coal into the boiler of a steam engine to the habits of rare fauna such as the bullet train track tester (shown above) which is nicknamed “Dr. Yellow”.

One such trainee is Naoto Takayama. He and the friends he makes in training (the jock, the man-hater, and the girl with huge tracts of land) are our main characters, but the focus is really on the trains. Even the traditional fanservice feels halfhearted. If you like trains, this show is a panoply of fascinating facts about the trains of Japan interrupted from time to time by an annoying urge to focus on people for a bit. Otherwise, this is a light novel with fanservice aimed at railfans rather than teenage males, and even if light novels are what you love, there are better pickings around this season. 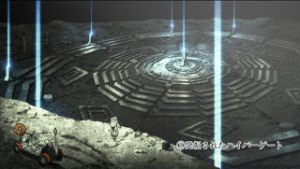 Aldnoah Zero premiere – In 1972, the Apollo 17 mission found a 30,000-year-old alien artifact which could be used to open a portal to Mars. Colonization followed, with some of the settlers inventing themselves an ancient lineage and claiming to be the rightful inheritors of the alien technology. In 1999, a brief war between their “Vers Empire” and Earth resulted in the destruction of the portal, which tore a chunk out of the Moon to rain down on Earth. Now it’s 2014, and the orbiting debris field is inhabited by squabbling clans just looking for an excuse to restart the war and carve up Earth for themselves. They’re about to get one.

In addition to all that backstory, we’re introduced to a wide cast of characters, including: the princess of Vers whose goodwill trip to Earth is about to provide the means to ignite the powder keg; her Earthborn attendant who entered her service after she saved his life; her host Count Cruhteo, who believes strongly in the Empire but does not look forward to another war; top high school student Inaho Kaizuka; his schoolmates, who include refugees from places which took worse damage than Japan in the “Heaven’s Fall” of 1999; and the lieutenant who oversees the military side of their education, who drinks to numb the guilt of teaching children to fight in a war that Earth will have no chance of winning. Because Lt. Marito was on the moon in 1999, and saw firsthand what horrifying powers the Martians have at their command…

That’s a megaton of information to pack into one episode, but Aldnoah Zero does it with deftness and verve. This is a show firing on all cylinders right from the get-go, and it looks like it’ll be a treat to see where it goes. 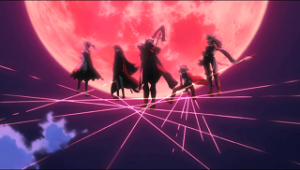 Akame ga Kill! premiere – Tatsumi is a fighter of amazing skill, but otherwise a country bumpkin. Coming to the imperial capital to find a way to save his village from the taxes crippling it, he’s soon swindled out of his money, taken in by a family with a dark secret, and then rescued by a team of assassins who forcibly recruit him.

Now the catch: the setting is Anime Fantasy Medieval, which means that someone made a few stabs at designing plausible buildings and costumes and then said the hell with it. So the nobles and their mansion look like they’ve dropped in from the 20th century, and there are bars and cafes which are basically modern ones with a layer of wood nailed onto them, and no two foreground characters dress like they came from anything resembling the same civilization or era. The light-novel tone of the early parts also meshes very badly with the later bits where people are being cut in half and tortured to death. (The source material is actually a manga, not a light novel, but you’d hardly know.)

With some real care for worldbuilding and a willingness to treat the story seriously, this might have had a chance at being good. As it is, forget it.

So, the verdict for this week: Aldnoah Zero is a keeper, and, risking the wrath of mased otakudom, Sailor Moon Crystal goes under “maybe” for now. Tokyo Ghoul would join it but for being inaccessible to a significant portion of the readers of Amazing Stories.

That’s not a bad start to the season, and there are some potentially good shows still to come. Let’s see if we can keep this up next week!

As I am preparing to self-publish my first novel, I thought I would talk to some friends who have gone down this road ahead of me, to see what they did, what they think now that it is done, and hopefully offer some inspiration to those of us taking the road less travelled. I got […]

Edgar Rice Burroughs: The Bibliography is a comprehensive catalog of the author’s work, compiled in a massive yet elegant volume just as impressive as the writer it honors.