Coming Monday: An excerpt from Who Wacked Roger Rabbit? by Gary K. Wolf 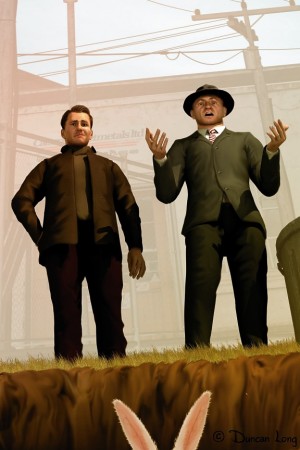 This third novel in the series made famous by the film Who Framed Roger Rabbit (based on Wolf’s 1982 novel Who Censored Roger Rabbit?) starring the late great Bob Hoskins and Christopher Lloyd (in one of his more memorable roles) was a 1988 blockbuster film event, introducing animated characters almost seamlessly integrated with live action.

Gary returned to his titular Toon Town universe with the sequel Who P-P-P-Plugged Roger Rabbit? (also optioned for film), following his noir detective Eddie Valiant ever deeper into cartoon mayhem.

Now he returns once again with Who Wacked Roger Rabbit? (Roger sure has issues!) and this time Eddie Valiant thinks he’s landed a cushy job – bodyguard for Gary Cooper as he scouts locations for his latest film – High Toon.

Join us Monday for an excerpt from the world of zany toons, Hollywood heartthrobs and grumpy gumshoes!

You can learn more about Gary K. Wolf and his other works on his website.

Copies of Who Wacked Roger Rabbit? can be purchased here

In this week’s viewing: Izetta destroys a ship, Cheating Craft blows up the whole concept of narrative, and more!

In this week’s viewing: It’s time to set the season lineup, which means something has to be crossed off the list. Luckily we have a volunteer…

The Digest: The First Privately-Funded Unmanned Spacecraft Might Land on the Moon in February