Summer has arrived. Time to find your favorite spot and crack open an amazing book. I have a few suggestions that are worth giving a good read. What follows is the Ultimate Science Fiction Reading List Part 6. Rather than attempting to describe each wonderful tale myself, the authors and editors will provide a small glimpse of what you can find inside each book. I’m sure you’ll find something worthy in the list. Happy reading.

Dolphins in space! Isn’t that enough?

Seriously, I was always fascinated by our relationship with the “highest” animal species on Planet Earth. The more I learned — talking to researchers who knew cetaceans and apes intimately — the more I realized, these creatures are not quite as smart as mythology pictured them… but they wanted to be! Both dolphins and chimpanzees seem frustrated  and eager to accomplish more than they currently can achieve, in solving problems, in communicating with us. 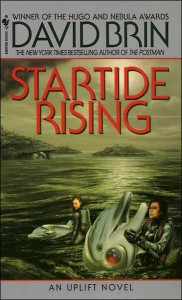 So? Suppose someday soon we became capable of giving them a hand? Of helping them cross the remaining gap and becoming skilled members of an advanced civilization? What an interesting society that might be! With our horizons of tolerance and citizenship expanded, along with new styles of wisdom…

… only what if others, out there, had already done this same thing?

From its very beginnings, science fiction has been transfixed by the eerie notion that human beings may someday pick up the Creator’s toolkit and start “making life,” even new kinds of intelligent life. Robots and super-smart computers make up part of this tradition, but there is another side. Perhaps the most important “technology” ever discovered was the domestication of animals to serve human purposes. Ever since Mary Shelley wrote Frankenstein, countless science fiction tales dealt with our ongoing temptation to meddle with other creatures. Many authors such as H.G. Wells, Pierre Boule, Mary Shelly, and Cordwainer Smith explored the concept of “uplift” — genetically engineering other animals to bring them into our civilization with human-level powers of thought. Most of those writers hewed to the same story-line, suggesting that this process would be abused by madmen who impose a slave-master relationship on the newly risen beings.

These were good stories — cautionary tales that helped mold the attitudes of modern civilization. But after more than a century, the plot seems a bit repetitious and overdone. Nowadays, would such a project realistically be run by mad scientists? In creating the Uplift Universe, I thought I’d try a different tack. What if we begin modifying higher animals — and I think we clearly will — guided by the morality of modern liberal society? Filled with stylish hyper-tolerance and guilt-ridden angst? Would we be in danger of killing our clients with kindness?

One needn’t picture slavery in order to sympathize with the plight of these new kinds of sapient beings. They would face real problems, even if they are treated well. Interesting problems, worthy of a story or two.

Setting this exploration in a far-future background involving aliens seemed only natural. It let me explore a lot of variations on the same theme. There are as many ways to treat uplifted beings as there are ways that parents treat children… some of them sick, or wholesome, or simply a question of style. Anyway, the question is not whether we’ll take on these powers, but when. In the long run, we’ll be better prepared if we’ve thought about it well in advance. Science fiction can play a role.

You know, most women who’ve done it don’t remember very much about giving birth; they’re too busy doing it while they do it. At the distance of over forty years, I can’t tell you much about the process of conceiving and writing Left Hand, except that I wanted to think about what gender actually is, and I do most of my thinking by writing fiction and poetry, so when I had an idea about people who were gender-free most of the time and only occasionally male or female, I followed that idea into the novel. It took a lot of working out and brooding over. Sometimes when I was writing it I’d come to a stop because I didn’t know how the Gethenians would think and feel about something.  Then one of the Gethenian myths and stories—alternate chapters in the book—would come to me and I’d write it down, and it would get me to where I needed to be to go on with the story. 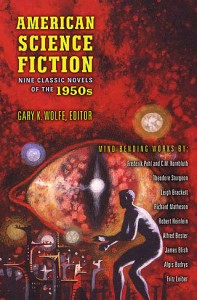 There were a lot of considerations in arriving at those novels. One is simply length—the Library of America wanted to get four or five novels in each volume, which made it hard to look at very long novels. Another rule, which I made up myself, is that the novels should be actual novels of the 1950s, and not fix-ups of 1940s stories, which eliminated a lot of classic books. I wanted to make the argument that the modern SF novel was essentially an invention of the 1950s, if only because that was the first time there was a major commercial market for it. That’s part of what I argue on the website, with crucial support from Barry Malzberg and Robert Silverberg. Finally, there was an effort to reflect the 50s as a period, so we included a Cold War novel (Budrys) and a novel reflecting nuclear anxiety (Brackett). I also wanted to get a sense of the variety of 50s SF novels, so we have a satirical classic (Pohl & Kornbluth), a Heinlein classic, a kind of proto-cyberpunk novel (Bester), a treatment of religion (Blish), etc.

I wrote that novel between volumes 2 and 3 of my ambitious literary sequence known as the ‘Pyat Quartet,’ an attempt to expose the many elements which created the Nazi holocaust. Concentrating on that subject had made me so depressed I decided I needed to write a novel which celebrated the things I loved in life, especially London, the city of my birth. To describe the many elements from the whole world which went into the creation of modern London I used the device of characters who could, perhaps, pick up telepathically all the voices of the city. That is really the only imaginative element of the novel and some people have chosen therefore to describe it as an sf novel, which it isn’t, though it does precisely what I had always wanted to do with modern fiction and that is incorporate elements taken from sf into its general structure. The other imaginative element is the reference to the ‘miraculous’ and how it has affected the lives of the three main characters (defusing an unexploded bomb during the Blitz, escaping a burning building, also during the Blitz, escaping a V2 rocket during the final Nazi bombardment of London etc.) but essentially the book is a celebration of ‘ordinary’ human courage, love and resilience and covers the same period of London echoing my own life until the abuse of those qualities during the post-war world I knew by those elements represented by Margaret Thatcher and Ronald Reagan, leading particularly to the commercialisation and consequent simplification of our history. When history is used to ‘sell’ a city or place as a product, then simplification and sentimentalisation necessarily come into play to abuse memory. Real myth is the opposite of that abuse. It enriches and perpetuates memory, it helps us survive. I think people pick up on the resonances in the novel and that’s why it seems to have kept an audience. I think one of the other two novels nominated for the Whitbread in 1988, which won, Satanic Verses by Rushdie reflected on similar themes. 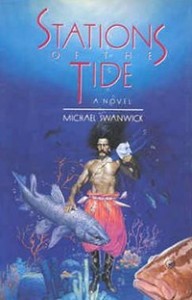 Sex, magic, and television as intangible technologies. A planet where everybody and everything is in the process of becoming something else. A hero with no name. Black constellations. Hallucinogenic rain. Tantric techniques. An intelligent briefcase. When I was writing Stations, I put in all the strangest things I believed to be true and I expected that nobody would understand a word of it. Instead, it turned out to be the most intensely understood novel I ever wrote. For which I am grateful.

In every chapter, I was careful to include an act of magic that I was sure Isaac Asimov could be convinced was feasible in the real world, in an escalating series starting from an act of stage magic. I was also careful not to spell out the novel’s themes, what it was actually about, so that what readers get out of it depends on what they’re looking for. Beyond that, I cannot say. It’s been a long time since I last read it.

Downbelow Station is set at the time when the Beyond, those places trying to break free of Earth’s control, and the Alliance, are at war, and the Alliance, trying to serve Earth, is itself getting weary of orders coming from a planet that has no grasp of the universe, from powers that have no grasp of the kind of fight it is—that defines itself in terms of boundaries and borders which mean absolutely nothing in a 3-d universe, and which does not even seem to understand what a meaningful outcome of the conflict would look like. One of the people in the story is the young stationmaster of a station orbiting a rich undeveloped world, and another is Signy Mallory, one of the surviving Earth Fleet captains, who has fought in this war all her life, who has a name as both a hero and a war criminal, and who strongly questions where and why the orders from on high are leading.