Home Fandom Son of Blast from the Past, or: One Elderly Brit Zine (for...

Once again I ransack the shelves of the BCSFA/WCSFA fanzine archives to give you a glimpse of what fanzine fandom was like back in the day. 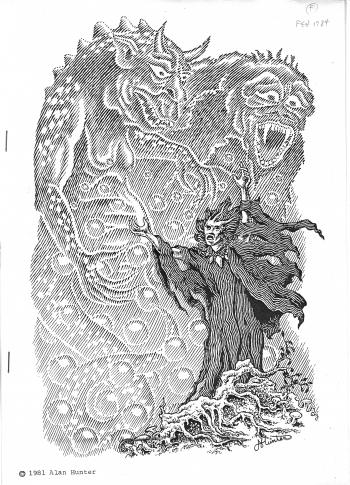 I used to trade both BCSFAzine and SPACE CADET for FF 20 years ago or thereabouts. Back then FANZINE FANATIQUE was mostly a quick listing of “Zines Received” with short, often VERY short comments. I treated it mostly as a useful guide as to what zines were being published worldwide at the time.

What a pleasant surprise to discover the earlier incarnation had been much more like an actual fanzine! To be sure, it begins with reviews, 43 of them, each with a single paragraph of commentary of varying length.

One of the longer ones is for SCIENCE FICTION REVIEW #50 by Richard E. Geis:

“Andy Darlington writes on Kurt Vonnegut; and there is a special feature on the J.W. Campbell Jr. Memorial Award Banquet, with transcripts of speeches by James Gunn, Steve Goldman and Brian Aldiss. There’s an incredible number of book, small press and film reviews. SFR now has a print run of over 2,500 copies each ish, but don’t be fooled; at heart this is still a fanzine and the best there is bar none. It has a lot of its editor in it too, and is none the worse for that. Recommended? Dare you be without it? It is essential reading.”

Sadly, though the BCSFA/WCSFA archive has 18 issues of SFR (also known as THE ALIEN CRITIC), it doesn’t include #50. In the days before internet it was sercon fanzines like this one which kept fans abreast of doings in the genre. Issue #19, for instance, featured an interview with Philip K. Dick and a loc from William Gibson. If you were a fan at all interested in SF (as opposed to just fannish matters) SCIENCE FICTION REVIEW was required reading.

But the review that really gets me excited is one for Terry Hill’s MICROWAVE (#7):

“A fifties style fanzine that’s moved with the times. Nice to see the names of old time fan writers: Sid Birchby, Bob Shaw, Lee Hoffman, and Terry Jeeves… The loccol has some job matching the quality of the writers, unusual in a fannish zine where it’s usually the heart of the amzine but it certainly does not disappoint. This must rank amongst the top 10 UK zines on any fanzine fan’s list. Get it, if you can!”

Why excited? Lee Hoffman for one. To quote Harry Warner Jr:

“Lee Hoffman published her first issue of her first fanzine only 44 days after she’d seen a fanzine for the first time. She named it QUANDRY. Like the Los Angeles fanzine KNANVE, the misspelling produced so much affection that nobody could bear to correct it. QUANDRY as a fanzine became perhaps the most beloved American fanzine of the 1950s.”

Possibly the Hoffman article in MICROWAVE was a reprint, but somehow the way the reference is worded gives me the impression it was original material, along with, presumably, those of the other contributors. In which case, good to see these fans still writing in the afterglow of their original fame.

Sid Birchby was a British fan who had been a member of the SFA (Science Fiction Association founded circa 1933), attending its last official meeting when it shut down in September 1940 because of the Blitz (Sid himself personally involved you might say, since at one point a German bomb demolished his house, destroying among other things his fanzine collection and his correspondence files), and who was present at the last Cytricon in 1958 where he witnessed (or took part in) the multi-hour session which resulted in the founding of BSFA, the British Science Fiction Association. I’m guessing he was a regular contributor to various fanzines over a number of decades. Apparently he was noted for both his serious and his humorous fannish writing, and was sometimes considered in the same league as fellow British Fan Arthur C. Clarke.

Bob Shaw was a wonderfully entertaining fellow, part of the 1950s’ “Belfast Triangle” whose other Northern Irish fen were Walt Willis and James White. Both Shaw and White went on to become SF authors, but as fans Shaw and Willis were particularly noted for writing THE ENCHANTED DUPLICATOR, the quintessential ‘Bible’ of fannish fandom, an account of the epic journey of Jophan in his quest for the perfect duplicating machine.

I know Bob Shaw was wonderfully entertaining, for he was guest of honour at VCON 17 in 1989. During the Concom dinner at the Frog & Peach restaurant I was seated next to him and couldn’t help but note he was downing Margarita after Margarita before we’d even ordered food. He turned to me and confessed “Margaritas are a weakness of mine.” I was a bit worried, wondering if he’d hold together throughout the con. Turned out he was one of those lads who could drink any amount and remain witty, intelligent and stimulating throughout, a first class GoH. After the con he went for a prolonged Vancouver pub crawl with Steve Forty, who to this day attests how Shaw’s wit and jolly spirit overwhelmed the patrons at each and every pub and bar they visited. He really was the most charismatic, imaginative and entertaining fellow. Sorely missed by all who knew him.

As for Terry Jeeves, he also attended the founding meeting of BSFA, briefly serving as assistant secretary and as editor of its publication VECTOR. Later he and Eric Bentcliffe published TRIODE, rated a “superb” fanzine by Harry Warner Jr. In addition Terry was a member of the Knights of St. Fantony, a spoof fannish holy order based in Cheltenham. In later years he published ERG and offered newbie faneds articles and fanart in abundance. I still haven’t used all the art he sent me for my zine SPACE CADET. He was a great and generous guy, was Terry.

My point being that MICROWAVE #7 contains material by classic fans, iconic legends all to one degree or another, so it would definitely be well worth reading should you ever stumble across a copy.

Speaking of legendary fans, this issue of FANZINE FANTATIQUE has a loc from fannish historian Harry Warner Jr who has interesting things to say, including comments on contemporary controversies which seem curiously familiar 30 years later:

“All those reviews in this issue… provide a good idea how many fanzines are coming out of the United Kingdom nowadays. Many of them are unfamiliar to me because I have no interest in comics or poetry, but I suppose most of these were inspired originally by the general fanzine field, in one way or another, so their existence shows the tradition is still alive even if it’s shifting into subfandoms…”

A near infinite number of subfandoms nowadays, but traditional zines keep plugging along, perhaps in TOO traditional a manner similar to what Harry describes back in 1984:

“Unfortunately it’s the same old stuff which those who believe in the perfect fanzine crave. So the 70s formula of ‘turn fandom on its head’, ‘make it meaningful’, ‘get rid of the old guard’ garbage was the making of faneds who adopted the party line. The 80s seem equally paranoid about the past, the fannish past; and want to make fandom a channel for political comment. Well as fannish historians will point out this ain’t a new thing. The 30s saw Michaelism – a fannish blend of communism – seek to divide and conquer. It failed as probably will the less coherent ‘political awareness’ movement current in fandom.”

Another bugaboo for Warner was the vicious nature of reviews aimed at hapless faneds without taking into account fanzines were not professional publications for profit but rather amateur publications done for fun. Consequently Warner felt that reviews:

It would appear fannish critics can be just as fond as mainstream critics in placing the focus of a review on themselves rather than the subject of the review. What better way to achieve notoriety than to strike a feisty pose and entertain at the expense of others? Though, to be fair, some negative-minded reviewers rip and rend out of sincere outrage over amateurish effort, forgetting that ALL fanzines are amateur efforts, and that not everybody is born with corflu coursing in their veins.

I prefer to follow the example of Harry Warner Jr. I always search for the neat and nifty, and frankly care very little about presentation. It is what the faned is attempting to say and do that holds my interest.

One last Warner quote, not controversial, but definitely interesting:

“If civilization collapses and all the power plants stop operating, fanzines will still be publishable on antique mimeographs that can be cranked by hand, while the photo offset, Xerox and other complicated reproduction methods will be useless…”

Then follows a lengthy account of the first ten years of the BRITISH FANTASY SOCIETY BULLETIN, both society and publication founded by Keith. After many editors and multiple experiments with formats it was “still not generally liked outside the society.” Rather sad, that.

Keith then reviews a number of books, including THE SPHERES OF DESTINY by Michael Gauquelin:

“Gauquelin set out some thirty years ago to disprove the claims made by astrologers. Instead he became… a believer in a theory which links planetary positions and careers.”

This is a crank theory new to me. It all depends on what planets are preeminent in the sky the day (or night) of your birth. If Mars, you’ll become either a sportsman or a general. If the Moon is dominant (presumably a full Moon), you’re bound to become a scientist. Jupiter ensures you’ll become a journalist, or an actor, or a politician, or perhaps some combination of all three. Right. Personally I consider the theory (Gauquelinism?) utter tosh, but that’s just me.

Last May 23rd I reviewed Carlos Claren’s ILLUSTRATED HISTORY OF THE HORROR FILM (1967) and intimated it was probably the first serious study of the subject. According to Keith the honour belongs to HORRORS by Drake Douglas, published in 1966. I stand corrected. However, “Clarens’s [book] far surpassed Douglas’s work…”

The last item is a reprint of THE MARTIAN NEWSLETTER which appeared as part of a combozine (multiple mini-zine contributions) distributed at the 1946 Pacificon Worldcon. It was written by one Telis Streiff, a Kansas fan who, a year earlier, had formed a club called THE MARTIAN UNION which attracted a dozen members before folding. His one-shot newsletter was probably a desperate effort to attract more members.

The humour is strikingly juvenile and presumably full of fannish in-jokes, though impenetrable to my eyes. I get that Martians drinking varnish is a running gag about fans fond of beer, and that the “Mighty Moscovich” refers to big name fan Sam Moskowitz, but I haven’t a clue who ‘Dorist’, ‘Noshabekenning’, ‘Klono’ and ‘Erf The Green Dragon’ are supposed to be. Still, sixty odd years ago, there were no doubt enough ‘obvious’ contemporary references to keep many a fan chuckling through its two pages. Merely a curiosity now.

This has been a demonstration of the fractal nature of fandom, even a single fanzine revealing interests and topics branching off in ever-multiplying complexity. Not a simple thing, fandom…