Science fiction stories featuring military combat have been part of the genre for a long time. You can trace it back at least far as 1903, and H.G. Wells’ story “The Land Ironclads,” and probably farther back than that.

Military sf is an established sub-genre in the field right now, and its popularity in comic book form seems to be on the rise. Top Cow recently started a comic based on David Weber’s Honor Harrington books, and IDW is publishing a re-mastered version of the Star Slammer comics by Walter Simonson. 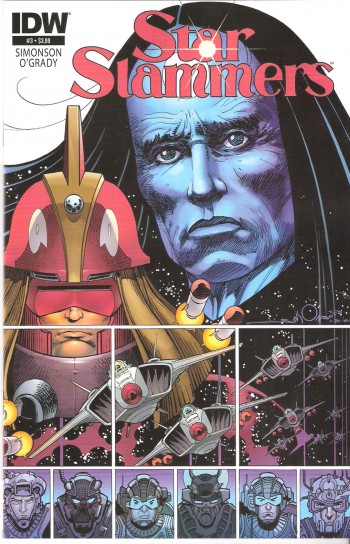 Simonson is probably best known for his work as both writer and artist on Thor, a run that includes the introduction of Malekith, the bad guy in the movie Thor: The Dark World. More recently, he wrote and drew The Judas Coin, a graphic novel that traces the provenance of the coin the Batman’s foe Two-Face uses sometimes to make decisions. Simonson has the coin pass through the hands of several DC characters throughout history, from the Viking Prince to Bat Lash in the old west to the futuristic Manhunter 2070. (I liked this book a lot, but it didn’t seem to get a lot of exposure.)

The Star Slammers, a group of space-faring mercenaries, was one of Simonson’s first creations, and actually goes back to before he started to work professionally. He did several Star Slammers mini-comics, in black-and-white, to promote the 1974 World Science Fiction convention in Washington D.C. In this story, the rulers of the Netherworlds hire the Slammers to destroy Washington before the convention can be held.

The 1974 Worldcon was the second convention I attended, and I’m lucky enough to still have some of the Star Slammers minis. (And when I say lucky enough, I mean anal-retentive enough). In any case, the cover of one of these comics should accompany this post. 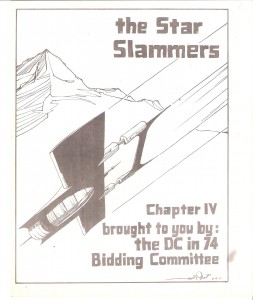 This particular mission was less than a success for the Slammers—the convention was held, after all—but Simonson has told interviewers that the series gave him a portfolio that helped him land professional work.

The Slammers were introduced to a larger audience in 1983, when Simonson did one of the first original graphic novels to come from Marvel. This story was recolored and reprinted as the first three issues of the IDW comic. It’s an origin story of sorts, setting up the conflict between the Star Slammers and the Orion Empire. Without giving away too much of the plot, I particularly liked the weapon that the Slammers found and the way Simonson showed it in action (although it must’ve been a real headache to execute. )

The mercenaries migrated to Malibu’s Bravura imprint in 1994, where four issues of a proposed five-issue series were published. This series is set in a different time period in the Slammers’ history, where a soldier named Rojas has to fight his way out of an Orion prison ship. The fifth issue of this series was published by Dark Horse. In addition, a black-and-white prologue to this story, in which Rojas encounters one of the characters from the Marvel graphic novel, was published in Dark Horse Presents #114.

Simonson has said that the Bravura series is coming next from IDW, and may be followed by some new stories, if sales permit. If you like Simonson’s work, or military sf, you should check Star Slammers out.