Having lived in Bulgaria for the past eight years or so (a Scottish immigrant), I felt it was long past time I should find out something about my adoptive country’s science fiction scene. Since my spoken Bulgarian is only average, and my reading and writing more or less nil, I approached Bulgarian science fiction writer, Radi Radev, who also writes in English, to give me a little introduction to the topic. I have read some East European science fiction, mainly Russian, Polish and some Hungarian, though I haven’t to my knowledge encountered any Bulgarian writers translated into English.

As you may know, Bulgaria became part of the EU a few years ago, and until 1989 it was still a Communist country. So, I asked Radi some questions, not only about his homeland’s science fiction literature, but also about its evolution, and the current state of play. There is much to be said on the subject, so I urge you to seek out more information yourselves, and check out Radi’s own books, and the work he references.

John Dodds for Amazing Stories: What are the origins of Bulgarian science fiction? Was it inspired by the early English writers, like Mary Shelley, or did it come from elsewhere?

Radi Radev: Yes, Bulgarian science fiction is inspired by Mary Shelley and H.G. Wells. But the biggest influence on it has been authors like Jules Verne, Ivan Efremov and Alexander Belyaev.

ASM: You said in your ebook covering fandom and the state of SF in Bulgaria, including cons, that there was a golden age in Bulgaria. When was that and why was it the high period?

RR: The first Bulgarian science fiction story was The Last Day of the 20th Century by Ivan Vazov. The story was published December 31, 1899. The collection of stories, The Blue Chrysanthemum, written by Svetoslav Minkov, released in 1922, is considered the first fantasy book in Bulgaria. Luben Dilov (December 25, 1927-June 10, 2008) is one of Bulgaria’s most prominent figures in contemporary Bulgarian science fiction, and more than thirty of his books have been translated into over 10 languages, with a total circulation of more than one million copies.

The best period for Bulgarian science fiction was between 1970 to 1990. My friend and mentor Nikola Kesarovski (who died in 2007) published his most famous book, The Fifth Law of Robotics, in 1983. The book had a print run of 100,000 copies and sold out completely.

ASM: What would you say the main differences are, if any, between Communist and post-Communist science fiction?

RR: I’ll answer with a quote from an article I wrote: “Before the changes in 1989 the science fiction community in Bulgaria was extremely well developed: there were more SF magazines and newspapers published, most sponsored by the state, and each of them had circulations in excess of 10,000. One could also find many SF books by Bulgarian and Soviet (Russian) authors in bookstores. SF literature by English-speaking authors was also available and authors included the likes of Robert Sheckley, Clifford Simak and E. F. Russell. However, some were not published, for example, Joe Haldeman and Fred Saberhagen. After 1990 all kinds of English literature became available and is very popular at the moment.” [from Science Fiction Fandom in Bulgaria]

ASM: We’ve seen in the west a number of East European writers translated into English (the Strugatskys, Lem, etc.), but I have no awareness of Bulgarian writers in translation. Can you tell us any whose work would be available in English? 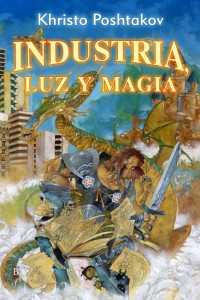 RR: Currently, the Bulgarian author of science fiction most published abroad is Khristo Poshtakov. Some of his fiction and essays have been translated into English, Spanish, Russian, French, Dutch, Romanian, Greek, Italian, Hungarian and Portuguese and published in more than ten countries around the globe. I wrote an article to celebrate the birthday of Mr. Poshtakov and it was published in Romania. My works have also been translated into five languages. You can also find translated works by the likes of Iancho Tcholakov, Harry Markov, Sabina Marinova, and Theo and Ivaylo Ivanov.

ASM: Thank you very much, Radi. I hope our readers will seek out your work and those of the other writers you name.

Radi Todorov Radev is a writer, journalist and a popularizer of science fiction. He has published more than 70 stories and articles in a wide range of publications such as Capital, Literary Forum, Locus, Zone F, and more. His most famous works are: Confession, a short story awarded in 1998 by Zona F magazine, Caress of Darkness, from the Better Karma Writing Contest and published in the collection, Caress of the Darkness. Radi was also the coordinating agent fot WorldCon 2005, held in Glasgow. For more about Radi and his work, check out his blog and his Amazon page, where you can find his Bulgarian Science Fiction: An Author’s Perspective free for Kindle, as well as books such as A Man of No Magic and Flying Minds.