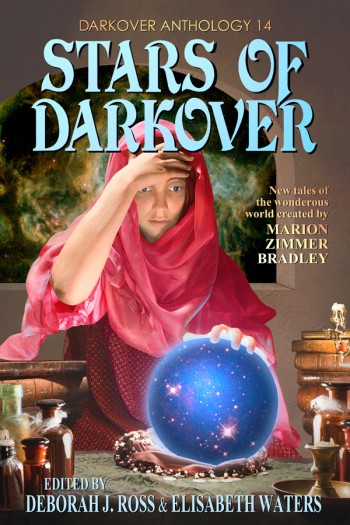 June 3, 2014 (San Francisco, CA) The Marion Zimmer Bradley Literary Trust has re-launched the popular annual Marion Zimmer Bradley anthology series with Stars of Darkover, featuring 15 new tales of action, courage, and humor from both old Darkover hands and newcomers to the World of the Bloody Sun, many of them nominees or winners of major science fiction and fantasy awards. Published after a twenty-year hiatus on the 84th anniversary of Marion’s birth, Stars of Darkover resumes the tradition of offering the best upcoming and established writers in science fiction and fantasy an opportunity to put their stamp on the World of the Bloody Sun. Stars of Darkover is available in trade paperback, Kindle, and Nook editions.

“Generations of fans have fallen in love with Darkover,” says Ann Sharp, trustee of the Marion Zimmer Bradley Literary Trust, “and many of them have gone on to notable literary careers of their own, often with Marion as mentor and friend. This new anthology re-launches the annual tradition of offering these and other writers the opportunity to play in the World of the Bloody Sun, and we look forward to welcoming more authors in years to come, starting with Gifts of Darkover in 2015.”

Over forty years ago, Marion Zimmer Bradley introduced readers to a compelling new world, Darkover, the World of the Bloody Sun. This distant planet circling a red sun was home to telepaths and rebels, lovers and rivals, nonhuman races both friendly and deadly, ancient traditions and even more ancient feuds, and psychic gifts of unimaginable power, channeled through starstone gems and capable of changing not only individual lives, but the entire world. Now editors Deborah J. Ross and Elisabeth Waters have gathered together luminaries of fantasy in this star-studded anthology of original stories that span Darkover’s rich history and culture. From the Ages of Chaos to recontact with the Terrans, from the Dry Towns to the back streets of Thendara to the horse pastures of Armida, these tales offer action, courage, and humor, set in the wondrous world that is Darkover.

The anthology offers the unique perspectives of 18 writers, many of whom have been awarded or nominated for major awards such as the Nebula and World Fantasy Award. These authors include old Darkover hands like Diana L. Paxson, Janni Lee Simner, and Robin Wayne Bailey, and Darkover newcomers such as Kari Sperring, Judith Tarr, and Rachel Manija Brown. Each story include a brief comment by the author about their connection to Marion and Darkover.

Stars of Darkover Table of Contents