Sean Martin, artist and conventioneer, fills us in on the roadblocks facing the disabled when it comes to games. 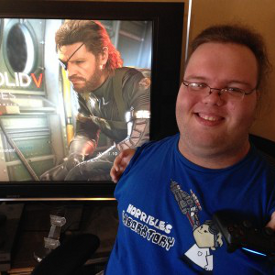 I’ve been biding my time since E3, trying to wrap my brain around all the awesome and equally frustrating things that it brings. As a gamer, I love E3. I get excited to see what new games are coming out and what new adventures that await me. Though as a disabled gamer, E3 becomes a time of frustration and disappointment. Every time I see something released for Xbox’s Kinect, some new motion control device, or anything for the Wii U, I can’t help but feel at least a little bitter. It’s like seeing all the kids having fun outside your window while you’re stuck at home. It’s getting to the point where I’m starting to worry that I’m losing something that I’ve worked very hard for.

I know some may find it kind of ridiculous that anyone should work hard at video gaming. Though it’s not about “being good” at the games. For me, it’s the great equalizer. It’s something that I do well. It’s something I do well enough that I can actually compete against others and feel that we are on equal ground no matter what the stakes. Gaming is ultimately the one thing that I’ve fought to master and evolve with as new generations of consoles roll off the line. Though I’ve never been completely successful.

The one thing that makes or breaks a game for me are the controls and this goes for consoles too. If I can’t handle your controls, then there is nothing you can offer me to continue using your product. Very few games have charmed me into stumbling through difficult controls just to complete the story and not a single console has won that fight. Because of this, I refuse to get a Kinect, a Wii U, or the Playstation Move and I don’t even bother with handheld devices any more. I’ve wasted far too much money on something that will only frustrate me or make me feel sick.

So I’m left asking, is there anything that can be done? I don’t want to tell game companies and console manufacturers how to do their job and I know I’m not their demographic. I think it would be selfish to think that they should cater to me. So then what? This is where 3rd party adaptations begin. I, personally, have never tried anything like this but that’s because I’m incredibly stubborn. There are charities and communities, like game-accessability.com and The AbleGamers Foundation, who focus on disabled gamers and assisting in adaptations to make video gaming more available to them. Both are amazing resources for those in need.

I have to admit that I’ll be checking both of these sites out. Even though I have my preferred methods of gaming like playing on PC instead of console, sometimes peering into the experience of others can mean the world of difference for yourself. Even if you’re not disabled or even a gamer, you can see the difference it makes for those who need it. Though I would have never known this stuff existed unless I really looked for it, which is an all too common predicament of adaptive services.

(Editor’s Note:  AbelGamers Foundation has an excellent video describing their mission;  we’ve included it below.)

FUTURESPAST EDITIONS CLASSIC REPRINT: The Fate of the Poseidonia by Clare Winger Harris

I had hoped to bring you a little photo journal of some of the fans I knew in Detroit and Ann Arbor in the ’70s and ’80s, but alas, such limited pictures as I had were lost in moving, and there is a shocking lack of material relating to Michigan fandom online. I promise to […]