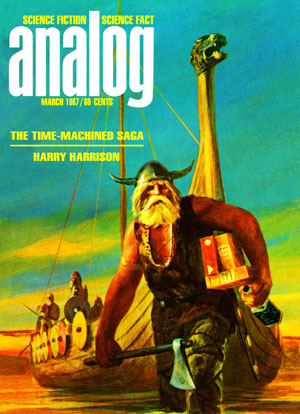 The movie and television industries have often been targets of humorous science fiction. Prime examples include William Tenn’s Venus and the Seven Sexes, Ben Bova’s The Starcrossed, and Amazing Stories contributor Daniel Kimmel’s Shh! It’s a Secret. Perhaps part of the reason for this is the ubiquity of TV and movies in our society, but I tend to think it just as likely that the excesses, immorality, and notorious personalities of the TV/Hollywood culture make for an irresistible target. Harry Harrison takes aim at precisely those failings in his stand-alone novel The Technicolor Time Machine. First serialized in Analog as The Time Machined Saga in 1967, the novel satirizes Hollywood while poking fun at the paradox inherent in many SF time travel stories.

Climactic Studios, the largest film company in the world, is on the ropes. Film director Barney Hendrickson is desperate to keep the studio afloat, in part because he realizes his filmmaking œuvre has been rather mediocre and he is afraid he won’t be able to find work if the studio fails. What the studio needs is a blockbuster, but with creditors ready to bring down the axe, there is neither time nor money.

Enter the time machine, or as its inventor Professor Hewett calls it, the vremeatron. Unable to find anyone willing to take him seriously, the professor has turned to Climactic Studios as a way to finance a full scale version of his invention. Ironically, “The professor’s machines cost less than the usual props,” and the machine is finished in short order. 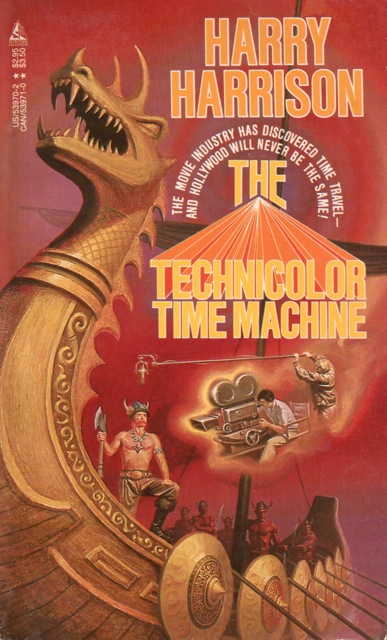 Barney prepares to make a film called Viking Columbus about the discovery and settlement of Vinland in North America, shot on location in the eleventh century. History in the making. That way the studio won’t have to pay for sets, movie extras or deal with troublesome unions. Things go well initially. They make a successful test run to the year 1004, capturing a Viking named Ottar whom they convince to learn English after bribing him with Jack Daniels whiskey. But the studio head, L. M. Greenspan, is ready to throw in the towel. Bankers will be coming to look at the books in a few days and they won’t be stayed with anything short of a completed film. Now Barney must take his film crew, sexpot starlet, narcissistic lead man and lots of whiskey back in time and hope that he can create a masterpiece.

Anyone who has ever watched a Hollywood historical epic knows how loose they play with the facts. This is one of the humorous themes of the story. For instance, when Barney notes that the natives of Vinland look more like Eskimos than Indians, he remarks that, “A few feathers and war paint will fix that.” Another humorous aspect of the novel is how Harrison deals with the paradox resulting from the filmmaker’s time travels. However, in the interest of not spoiling the story, I will refrain from elaborating.

While Harrison is better known for his Stainless Steel Rat and Bill, the Galactic Hero stories (both excellent and deserving of praise), humor fans should not overlook this much underrated time travel romp. The Technicolor Time Machine is an engaging quick read that is funny and well worth your time. While this classic is no longer in print in a literal sense, Tor has an e-Book available. And those who prefer an old fashioned physical copy should have no trouble finding a used one.