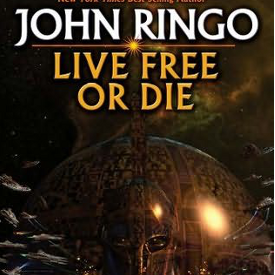 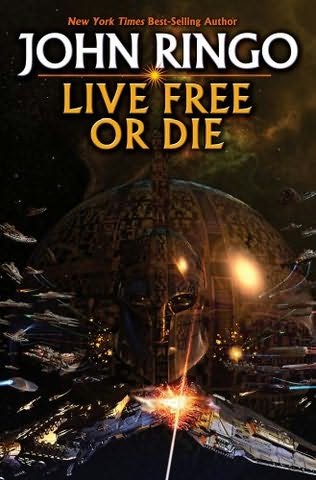 Reviewing Live Free or Die is a complicated task. I like the book, I think it’s the best Ringo book since Gust Front, but there are a handful of problems with it that gnaw at my mind the more I actually think about the story.

In the very near future, a wormhole gate is placed in the solar system by a mysterious race of gate-builders. This wormhole allows Earth access to a colossal network of such gates; unfortunately, the gates also allow aliens to visit Earth. Within a few years, one hostile race arrives, bombards a number of human cities and basically conquers Earth. Humans have to supply them with a tribute of raw materials every year or face additional bombardment. Resistance is futile.

But Tyler Vernon has a plan. Stumbling into something humanity can actually sell to the other Galactics, he sets out to displace Earth’s unwelcome masters and allow the human race to take its place among the galaxy. In doing so, he accidentally involves the humans in a long-brewing galactic war.

There is a great deal to like about this book. Vernon himself is a fun character to follow (the later two books in the series displace him to some extent, which is a major problem) and there are some definite moments of humour. Human imagination combined with alien tech provides a whole new way of doing things, ones the aliens overlook until it is too late. Vernon has one hell of a can-do attitude, which makes him likeable. But there are some problems.

The first one lies in the political slant. Earth’s governments (particularly the President of America, who is clearly Obama) roll over on pain of bombardment. This is painted as a bad thing, but what other choice do they have? Vernon isn’t just gambling his own life on an uncertain outcome, he’s gambling with the entire human race. This is basically on the same level as Kuwait standing up to Iraq in 1991, without the certainty of American intervention.

I mean … I can understand risking my own life, but that of all of humanity?

The second lies in a biological attack mounted by aliens on Earth. For various reasons (the alien logic is dismissed in the book, understandably) the aliens conclude that blonde humans are more likely to be submissive than brown-haired humans. Their biological weapon targets non-blondes for elimination, while giving blondes a mating drive that makes them incredibly horny, thus ensuring procreation. The attack is actually designed to kill off dumb humans, because if you’re too stupid to take precautions, the aliens think you’re too stupid to be allowed to live. The problem lies in the aftermath. There are still thousands of stupid (and this includes people who refused to take treatment) alive in books II and III.

Overall, however, Live Free or Die is definitely worth a read. Probably one of the best ‘Earth’s Opium War’ stories out there.

Book Review: Steadfast (The Lost Fleet: Beyond the Frontier) by Jack Campbell

Author of the Ignotus Award winning novels Demons in the Sky and Mortal Health, Gabriel Bermúdez died on May 19, 2019.

An excerpt from the second novel in Weston Ochse’s Task Force OMBRA series.