Upping their game to compete with the Networks, several of the streaming services have entered into the original programming arena of late. Hulu is one of the latest to do so and may have hit one out of the park with their new offering Deadbeat. 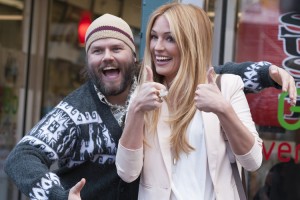 Starring fan favorite Tyler Labine (Invasion, Reaper, Tucker and Dale vs. Evil) Deadbeat is not your typical SFF show. But it does manage to hit all the marks previous Labine programs have. Basically, the show follows the overweight, scruffy slacker (Labine’s regular character of choice) who happens to have the ability to see and hear the dead. Rather than whine about his psychic power, or even effectively use it to make himself rich, the character of Kevin Pacalioglu instead does the right thing: he tries to help those that have passed on.

Currently, there are 10 episodes of Deadbeat, each of which seems made for a half-hour TV slot, with the appropriate interludes for commercials (which Hulu does have), and some ocassional bleeping of rough language. However, the show also features a lot of adult situations and discussions that might prove problematic in a move to broadcast TV. It definitely isn’t for the kids.

The Good: Once again, we can’t help but like the titular Deadbeat Tyler Labine is so good at portraying. He’s like a modern Lou Costello: not so bright, overweight, comical, but entirely likable.

The Special Effects are top-notch, reminding me of Michael J. Fox’s great The Frighteners, complete with blurry halo. Of course, a show about ghosts doesn’t really require much in the way of special effects. There are no explosions, car chases, machienguns or any of the other manly stuff I’d normally require my programming choice to have.

The Bad: The episodes are very short. That isn’t always a bad thing. The live-action version of The Tick was a half-hour format, but was an incredible, very-enjoyable show. The episodes also feature a LOT of adult situations and language, preventing my children from watching. Which is a shame, as they absolutely love Tucker and Dale vs. Evil and Reaper. But unlike other shows, there’s simply too much to rely on the parental fast-forward filter. I’d give an example, but this a family-friendly website. Suffice it to say, if there’s even one prudish bone in your body, you might be aghast at Deadbeat. It’s no Archer, but it does push the envelope. The first episode in particular is extremely adult-oriented, and features some scenes you migt wish you hadn’t seen. Don’t say I didn’t warn you. (ie, read the episode descriptions before watching)

The Questionable: Pack (as his friends call him, because even the character seems to have trouble pronouncing his own last name), is a devout drug user. He hangs out with his best friend/drug dealer and uses drugs recreationally on a regular basis. I’m not sure if the drugs use is intended to mock drug users, or make them seem lovable. If anything, it reminds me of Cheech and Chong. I was very much anti-drug use back in the 1970s growing up, but greatly enjoyed their whacky weed adventures. Deadbeat may be trying to recapture that vibe. Or maybe it just fits the scruffy, overweight Hipster Labine plays so well. 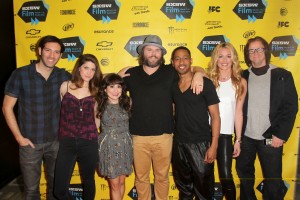 There’s also a very odd… creature who’s ghost befriends Pack part way through the season. I have my suspicions as to what it might be, but won’t voice them here. Whatever it is, I’m sure it’s going to be disturbing and tasteless.

All in all, despite it’s stomach-churning opening episode, the rampant drug use and the highly-inappropriate humor, I couldn’t help but like the show. Maybe it’s because I miss Reaper, in which Labine’s character “Sock” was clearly the star. Or maybe I’m eagerly awaiting a sequel to Tucker and Dale. In any event, I’ll keep an eye out for more of Deadbeat, but hope they reign it in a little in future episodes. With very little changes, it would make for just as much family fun as Reaper.