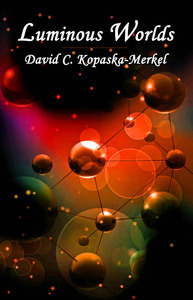 Today I’m reviewing David C. Kopaska-Merkel’s most recent poetry collection, Luminous Worlds. (He’s been creeping into my reviews a lot, hasn’t he? Well, there’s a reason for that, you’ll see). Kopaska-Merkel is the current president of the Science Fiction Poetry Association, and it’s been in that capacity that I’ve gotten to know him a bit. He’s also one of the more prolific social media practitioners (Twitter and Facebook) and he does a really good job of getting the word out about his activities, be they poetic or scientific. He’s one of those poets whose day job is as a scientist, a geologist, in David’s case, and it definitely is evident in his poetry. He is also the publisher of one of the premier genre poetry journals – Dreams & Nightmares, which is notable for its longevity as well. Published quarterly (mostly) it’s coming up on its 100th issue. 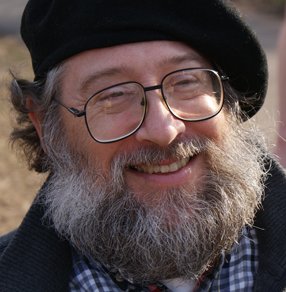 t! I love this about his poetry. I love looking up words I’m not familiar with. It does make for a somewhat slow reading of some of his poetry. That is, unless you have an equally massive vocabulary (which I apparently don’t – at least when it comes to scientific terms and such). There is a preponderance of words 7 or 8 letters and longer. But don’t let that deter you! Think of it as a celebration of language!

Luminous Worlds, the collection is a retrospective of the poet’s career – 25 years of published poetry in venues such as Abyss and Apex, Asimov’s SF, Ideomancer, Illumen, Poetry Life and Times, Scifaikuest, Star*Line, Strange Horizons, and The Pedestal Magazine. There are a few new poems as well. With my limited experience I’ll say that I couldn’t tell you which poems were written long ago and aside from the 4 new ones, or poems I’ve read (and/or recorded) in the last few years, couldn’t tell you which ones are from the pen of an experienced poet. They are all top-notch, if you ask me, which is the way it should be, I suppose!

Many of these poems have a dream-like quality, which encourages you to slow down and take the time to absorb them, and hope understanding dawns, just a little bit. The environment or the world in which the narrative takes place is so weird and seemingly disconnected from ours, just beyond our grasp. But then, in one line, it is all pulled into focus and it suddenly makes sense, but it is sometimes fleetingly, because it is so often dependent on our understanding of tropes, and is that what he really means?

“The Roar of the Greasepaint, the Smell of the Crowd”

He was too wobbly,

The elephants were better;

the gray pebbly skin was quite realistic, …

Now the dog-things were doing all sorts of amazing

Maybe they couldn’t get rid of the extra legs.

There were so many limits to the fabrication process.

(blogger’s note: the bold marking is mine)

You see what I mean?

On the other hand there are poems like “Tsunami Child” (click the title to listen), which would be immediately accessible to anyone. I wouldn’t say they are realistic, magical realism perhaps, but not so “out there” that someone who doesn’t read mostly genre fiction or poetry wouldn’t “get it”.

I’m a big fan of Kopaska-Merkel’s irreverent poetry. I love those poems that poke fun at our immersion in “Geek Culture” or use perhaps over-prevalent tropes to show us our ridiculousness. He is a master of humorous exaggeration. There are several in this collection. Have a listen to “Supersonic Rocketeer”. In my last post about Mythic Delirium No. 30 I recorded his joint poem “Mythic Delirium” with Kendall Evans, which is a perfect example of what I mean. Or you can hear his poem “If Ancient Texts Are Anything to Go By” (at approximately the 6’30” mark) in my recording for Cthulhu Haiku and Other Mythos Madness

Some are just downright creepy – perfect examples of good horror poetry. I especially liked “Lich Light” for its perfect escalation to the denouement. It truly gave me shudders! “Porcelain Doll” is also perfectly creepy in a different sort of way. It’s written in a way that almost makes it seem perfectly normal. Almost. 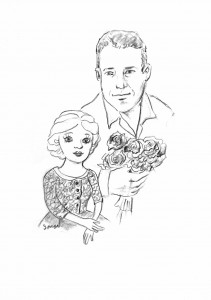 The interior artwork is done by Marge Simon, herself a successful genre poet. She has done covers and interior art for countless poetry collections and websites. Her pencil drawings are perfectly matched to the poem they accompany, and yet they don’t depict a specific scene, but rather extrapolate and compliment, even embellish them. See her drawing for “Porcelain Doll” at right.

There is something in this collection for all interests among lovers of genre fiction. You’ll find time travel, mythological figures, superheroes, zombies, Lovecraftian creatures, horror, plenty for the geologist, inter-stellar travel. Have a listen to “The Clone Ship Captain”. And yet, David C. Kopaska-Merkel’s poetic voice is quite distinctive and sure. Luminous Worlds and another collection Edible Zoo (which I reviewed here, complete with a few audio examples) have been nominated for the 2nd annual Elgin Award. You may be reading about one of them later on this year!

Next up: Zombies! Or should that be: more zombies!? (This time by G. O. Clark)