Donatello, Raphael, Michelangelo and Leonardo (Splinter!): who are they really for? Certainly not the same audience as Howard the Duck.

I, like many, have recently seen the new trailer for Michael Bay’s Teenage Mutant Ninja Turtles. Growing up, in the 80s and early 90s, it was my favorite cartoon. I had the turtles cereal, ate out of a turtles bowl, had Ninja Turtle clothing, backpacks, lunch boxes, toys, video games, books, comics, etc. Teenage Mutant Ninja Turtles were even the first words, aside from my name, I learned to spell. It didn’t seem to matter what the product was, either. Hell, they could have put a bunch of slop in a container, slapped the logo on it, and we would have made our parents buy it … oh wait, they did.

There have been a few versions of the cartoon since the 80s, but none of them took off like the original. And I think that’s the one people are referencing when they’re talking about Michael Bay’s pillaging and raping of their childhoods.

In a previous article, I talked partly about the death of nostalgia because nothing ever goes away. Case in point, I can turn to the cartoon channel and watch a rerun of Teenage Mutant Ninja Turtles almost any night. Although tonight, there seems to be an Alvin and the Chipmunks marathon. Hmm, I wonder where the public outcry from middle aged adults was when those crappy films were being made.

But here’s my head scratcher. I want to really know who this film is for. The people who are most interested in it seem to be upset by how much it varies from the cartoons, and the people like me, who’ve moved on from elementary school, have interest in it like a passerby does a car accident.

Simply put, it’s going to suck because it’s confused and has no demographic – not unlike the first one, which had a weird plot and didn’t capture much of what the kids liked about the cartoons. But it had the brand name slapped on it, and Jim Henson did bring them to life, so we loved it. But that sort of magic is dead in modern film making. With the bar of special effects having been raised so high, I don’t know what it would take to dazzle a kid anymore, let alone a bunch of jaded, cynical adults.

Now if you’re wondering where I stand on this whole childhood thing, most of the people I see complaining aren’t old enough to have actually watched the show when it was relevant. At best, some of them may have caught the tail end of it. I do remember tuning into a newer episode when I was about 13, and it was so bad that I opted to play Hexen, on Nintendo 64, instead. 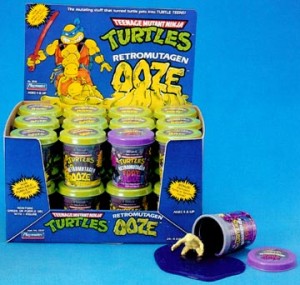 Anyways, nobody wants the cartoon made into a film, not even you. I know you think you do, but if you go back and revisit such classics as Attack of the 50-Foot Irma, I think you’d learn to let it go. And remember, Teenage Mutant Ninja Turtles was destroyed long before Michael Bay ever was approached for a film:

Hilarious take on the subject, though not safe for work.

Those difficult teen years. A time when you have no money, power or influence, and have to spend your day going to school without getting paid for the privilege. Have to do what adults say all the time, but have little money to do what you want, and anyway, increasingly, the things you really want […]

50 Years On: Two Films That Explored New Territory for SF