Why so many paranormal shows? Maybe its because so many people believe in that stuff…. 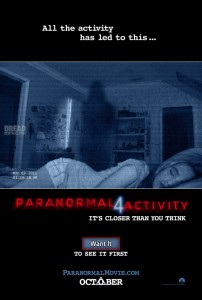 Horror is probably my favorite genre of film. But that doesn’t make me an obsessed fan. I don’t decorate my home like it’s Halloween or only watch scary films. In fact, it’s probably the genre I watch and read the least of. Simply put, it’s rare to come across a work that is actually scary.

As a horror writer, the best complement someone can give me is that my story gave them nightmares. It means I did my job and created a piece of fiction that gave someone a temporary nudge into a different world, albeit a darker one. But what makes an unbelievable story that powerful?

The truth is it can take a lot or very little work – depending on its target demographic. I’m a skeptic. I don’t really believe in anything. Although, having experienced what could have been paranormal, I’m more a disbeliever of the various explanations and experts in the unknown than I am of the possible existence of inexplicable events. So, I need some sort of groundwork and a buildup to something crazy, like Jacob ’s ladder or The Exorcist. Those with a solid grasp on reality, require more work to loosen it.

If you wonder why they made so many Paranormal Activity films or there are so many Ghost Hunter or Adventure shows out there, it’s because a large percentage of people believe in all of it, without question or hesitation. And when writing horror for these folks, you don’t need to ground yourself or build credibility to make the story / film / show believable and scary. It’s already there, similar to the remake craze: built in audience for it, and very little substance can yield a very big payday.

Of course, we don’t live in a world where people can overtly use magic to do things. I’ve never seen anyone cast a spell that did anything, summon a shoggoth, or actually levitate off the ground. So the rest of us, who just follow the science and have no strong beliefs toward any of it, are being ignored. Even when we suspend our disbelief, there is rarely an effort to transition ghosts or monsters from fantasy into any reality we recognize.

The “found footage” motif used to be a shortcut. It’s one that’s been used since Bram Stoker’s Dracula and Mary Shelley’s Frankenstein. Give a first person account of a diary or journal, and you create a more realistic atmosphere. I’m not against this in horror, either. Some people get annoyed by the shaky camera stuff, but I think it’s the most powerful way you can create a sense of realism. However, today’s films often use it as the plot device instead of a medium, and it’s become a cliché.

I don’t want to get into the whole Twilight, Vampire Diaries, and whatever other crap copies of Anne Rice’s work, either. I consider that stuff more fantasy than horror. I don’t even think it pretends to be, either.

But this is the reason I cringe at scariest movie lists. I’ve been more frightened by episodes of The Twilight Zone and The Outer Limits than anything Hollywood has put out in the last decade and change. The only thing scary about most of these new films is the horrific acting.

The Future Is Being Staged – Updates and Food For Thought

Growing Pains is a new collection from the highly talented British author and editor Ian Whates. Whates is the author of the Noise series of space operas and the urban fantasy trilogy City of 100 Rows. He edits the on-going Solaris Rising anthologies and various entries in the Mammoth Book of series, including the Alternate Histories and […]

History Unveiled: Did you know that the worst massacre of people of color in the US took place 100 years ago this week?