The short story Green Fingers by Arthur C. Clarke is a fine example of dreamers and forecasters from over half a century ago. 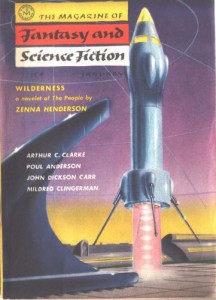 Having first appeared in the January 1957 issue of The Magazine of Fantasy and Science Fiction, Green Fingers by Arthur C. Clarke is another fine example of dreamers and forecasters from over half a century ago who shared the same passion and hope of space travel as today’s fans of science fiction. The version reviewed here is from the 1978 edition the anthology of The Worlds of Arthur C. Clarke – Of Time and Stars.

Clarke tells the story of Russian botanist Vladimir Surov aboard the survey ship Ziolkovski who mysteriously dies on the lunar surface while attempting to “design” a plant strong enough to survive the ruthless atmosphere (or lack thereof). Quite and standoffish, Surov prefers to work alone, which ironically becomes a major factor in his demise.

It is distinctively difficult to pinpoint the nationality of the narrator. We know he is a commander with many clerical duties that keep from going outside on missions as often as he would like. He references neither “we nor the Americans” when discussing supplies, yet he also indicates that Surov is under the supervision of a Russian commander named Krasnin. It seems the narrator is part of a third team working alongside the Russians and the Americans, but the reader is not given any hints to a nationality. I attribute this to the notion the narrator could be anybody, a casual observer who any reader will be able to identify with.

One of the most notable aspects of the story is Clarke’s realistic view of space life by the narrator. The usual romanticized view of fans with narrow visions of space travel was often exaggerated in stories during the golden age. With hopes of comfortable life on the moon and inevitably vast technological advancements, readers themselves became eager for life off of Earth. But the reality of living in such a harsh environment with limited technologies of the time was a welcome aspect to the more loyal fan base. Clarke made it real.

Here is a simple observation by the narrator about the how uncomfortable lunar life can be.

“We were right in terms of economics, but wrong in terms of morale. The tiny airtight greenhouses inside which Surov grew his vegetables and dwarf fruit trees were an oasis upon which we often feasted our eyes when we had grown tired of the immense desolation surrounding us.”

Stating the fact that their “tiny airtight” environment on the moon was little more than a livable crypt is not enough. If the reader is truly going to experience the story, he or she cannot avoid the emotional anguish that comes from “the immense desolation surrounding us” and the desperation of focusing on the tiniest morsel of life from back home. This also draws on the importance of Surov’s work and why the other crewmembers tolerated the botanist’s eccentricities.

Face it, growing plants on a dead rock like the moon is not very realistic. But that is not what this story is about. Green Fingers is about the drive and fortitude to try the impossible. It is not about life or death or success or failure. This is about the resilience of man to grow as a society, even on the moon.

Green Fingers may be a very short narrative, but it has a lot to say. Over the years, Arthur C. Clarke established himself as a futurist with an eye for space travel. Not everything has turned out like the author had predicted, but his visions and determination live on through classic stories like this.

In Mad Shadows II: Dorgo the Dowser and the Order of the Serpent, author Joe Bonadonna has a knack for setting the scene and drawing readers in.

Chocolate and bacon, the only things better than cheap eBooks and SF movies! (Okay, there’s sex and alcohol too.) Steve offers you both! (No, not sex and alcohol—ebooks & movies!)

Rediscover the Fires of Nuala

My Portals to Escapism