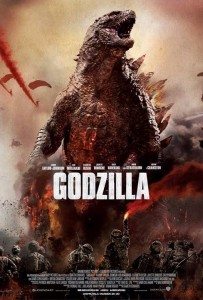 The newest Godzilla falls into that category of movies least interesting to write about, let alone see, the category of “Ehh.” It’s neither terrible nor wonderful. It’s a movie. About Godzilla. In 2014. He destroys some stuff, fights a couple of other monsters. There are people in the movie, but not so you’d notice. Gareth Edwards directed it. He made a low-budget, stylish monster movie called Monsters in ’10, which got him the job.

Godzilla is a very somber movie. There are no laughs. No intentional ones, anyway. As with every modern update of an old franchise, the primary goal is “realism.” The monsters have to look real. The effects have to look real. Cities are destroyed, and that’s serious business, so it’s got to be a grim affair, and indeed it is. I’ve read reviews of the movie from the more fan-boyish crowd happy with how “fun” the movie is, so maybe they were in the wrong theater? And watched Godzilla Vs. Monster Zero (aka Invasion of Astro-Monster) instead? I feel this is the most likely scenario, one I highly recommend imitating.

There is little fun to be had in Edwards’s Godzilla, aside from the monster fight at the end, and even that, though visually impressive, is as somber as all that precedes it.

The movie is, as they say, deliberately paced. Which is often a great thing for a movie to be, even a monster movie (see: Jaws). It allows one to get into the story and the characters and to savor the anticipation of the monster fights to come. If, however, as in Godzilla, the characters are as deep as wallpaper, this technique is less effective. Watching wallpaper act leaves one wishing a monster would turn up and eat it.

Bryan Cranston acts his pants off in a desperate effort to inject excitement into his otherwise boring scenes, but he’s gone within fifteen minutes. The central character is his adult son, Ford (born, curiously, on a small planet somewhere in the vicinity of Betelgeuse), played as a moody near-catatonic by Aaron Taylor-Johnson. He gets to sort of save the day at the end. Until then, his job is to blend into the background, which he does masterfully.

I don’t understand the casting here. Yes, it’s a monster movie, and we might well say of monster movies, “the people don’t matter.” But if that’s the case, why, then, choose such a bland leading man? Why not choose a compelling weirdo? I mean if it’s the monsters we’re here to see anyway, why not have a little fun with the throwaway human characters, i.e. all of them?

Ken Watanabe plays Dr. Serizawa, a scientist whose theory that Godzilla is a manifestation of nature’s need to heal itself proves correct, is given literally nothing to do but stand around looking amazed. Sally Hawkins plays, according to the credits, another scientist, but from watching the movie I assumed she was Serizawa’s personal assistant. She spends the movie whispering meaningfully in his ear. David Strathairn, poor guy, is supposed to be an Admiral. To call his performance wooden would be an insult to wood. Everything he says sounds like he’s saying, “Really? This is my line? Fine, goddammit, I’ll say it, but I’m not going to enjoy it one lousy bit.”

The story, then. It begins with an excellent opening credits sequence, showing stock footage of atomic bomb tests in the Pacific mixed in with footage of Godzilla’s back jutting up from the sea. Aha! All of those bomb tests weren’t tests at all: they were attempts to kill Godzilla. Clever way to tie this into the original Godzilla from ’54.

In ’99, a monster cave is found, a big skeleton within, and the recent remains of a newly hatched parasite-monster. Hm. It travels to Japan, where it destroys a nuclear power facility, killing young Ford’s mom.

In the present day, the parasite grows lively again, or maybe it gives birth to a new one? Something like that. It’s big and it’s got wings and away it flies. So begins the trouble. Another one is in Nevada because blah blah blah, and the two head for San Francisco to meet up and make some baby monsters. Their sonar-based chatting wakes up the king himself, Godzilla, who, acting on behalf of nature itself, rises from the depths to kick some parasite-monster ass and again bring balance to the world.

The navy doesn’t know that, though. They decide to blow up the parasites, busy mating and laying eggs in downtown San Francisco, with a nuke. Dr. Serizawa advises doing nothing, and letting Godzilla handle things. Which he does, eventually, in an impressive monster fight to end the movie.

Godzilla isn’t in much of the movie. He lurks around its edges, swims beneath aircraft carriers (cool visual, that), and doesn’t really get busy until the end. Not a bad thing, though I wish the parasite monsters were more interesting, since they provide the bulk of the monster action.

Another thing I don’t get about the commitment to “realism” with respect to make-believe monsters is their inevitable color scheme. Has no one designing these things ever looked at nature? Lizards are colorful. Insects are colorful. Why does every modern movie monster have to be dark grey?

At least Godzilla looks like Godzilla, more or less, unlike the lizard-thing from the regrettable ’98 remake. He’s actually made to appear a bit like a CGI man in a suit. He has neat blue/white atomic death-breath, like he’s supposed to. And he’s a force for good. All bones thrown to the die-hard Godzilla fans out there.

Maybe enough bones were thrown? Godzillaheads, if the internet is to be believed, are content. Then again, these are the same people who call Pacific Rim a work of genius. Maybe realistic monsters are all that’s required?

It feels like Edwards wants to walk a line between old-fashioned monster action and new-fangled ponderous realism and never figures out how to do it. Either one’s monster movie needs to be heavy on the monster action, with a few broadly drawn humans in the mix, preferably weird enough to be amusing in their brief screen-time, or else, if the monster action is kept primarily to the final third, one requires compelling, believeable characters whose fates one cares about. There is no one to care about in Godzilla, yet there they are, the focus of scene after scene. And the dialogue! Egads. There it nothing wrong with hilariously bad dialogue. There is everything wrong with boring bad dialogue.

There is something missing from modern monster movies. The CGI monsters lack personality. What is it about CGI that robs imaginary creatures of their souls? Why is the fight between King Kong and the tyrannosaurus in the ’33 King Kong so much more exciting than the fight at the end of the 2014 Godzilla? Is it the physicality that stop-motion brings, the realism of watching physical objects? Is it the skill of the filmmaker? Is it the choreography of the fights? I don’t know why animating on a computer should necessarily result in boring monsters, but it’s a recurring problem, one not solved in Godzilla.

Maybe in the inevitable Godzilla sequel, they should animate the monsters with stop-motion, and use CGI humans in lieu of actors. An idea whose time has come! Who’s with me?

This review of Godzilla originally appeared on the cinema blog Stand By For Mind Control, where editors Sean McPharlin (aka the Supreme Being) and Zack Kushner (aka the Evil Genius) cover the breadth of cinema in their inimitable style. They are thrilled to be contributing discussions of genre cinema to Amazing Stories.

Filming a Fantasy Movie! An Interview With Bruce Hopkins

You can never go home again…or can you?

Can we learn anything about survival from survival films?

A. Merritt on Film: Seven Footprints to Satan

Indie Book Review: The Seals of Abgal by Woelf Dietrich