Steadfast the latest Jack Campbell Lost Fleet novel is out – featuring a cover that actually depicts a scene from the book! 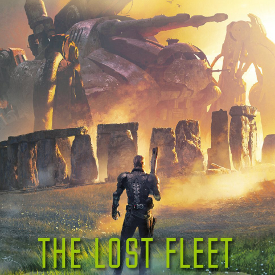 There are a couple of ongoing series that will cause me to stop whatever I am reading at the time and pick up the next installment by the author. The Lost Fleet series by Jack Campbell (a.k.a. John G. Hemry) is one of those series and I was excited to finally get my copy of Steadfast, which I quickly devoured in under two days.

For those who don’t know, The Lost Fleet series is a military science fiction series known for its realistic depiction of space naval battles. The main character is John “Black Jack” Geary, an Alliance Navy captain who sacrificed himself to give his crew a chance to escape their ship after a surprise attack by the Syndicate Worlds, chief rival to Geary’s Alliance. Geary actually survived the attack thanks to the cryogenic life support system onboard his escape pod. He is found and thawed out one hundred years later to discover his people have been locked in century long war and he has been hero worshiped since his presumed death by a war weary Alliance. In the first book, Dauntless, Geary finds himself the most senior ranking officer in the a fleet trapped behind enemy lines and the only hope for ending the war.

Flash forward to Steadfast, Geary’s mission to Sol system is nearing its end, but he will have to maneuver through its Byzantine politics to make it home safe. Once back in Alliance space, Geary is tasked with dealing with a refugee crisis on a border star system, but there are bigger issues afoot and the alien race known as the Dancers may be the only one who can see the big picture. A mysterious threat that has been growing since the Beyond the Frontier story arc began will finally reveal itself.

Steadfast is the tenth book in the series and it did not disappoint. Geary’s world building and writing style have both improved dramatically. We got to see some character development for some secondary characters and we even saw Geary take a more active role in trying to help the Alliance recover from its long war. It was emotional, humorous, packed with social commentary and we got to see more space battles where the combatants take every advantage they could out of the laws of physics. It still would be nice if Campbell/Hemry spent some text giving better physical descriptions of the characters, but I guess I shouldn’t be too picky especially since another of my usual gripes was finally addressed.

Longtime fans of The Lost Fleet will be especially pleased that Steadfast is the first book in the series to have a cover featuring an actual scene depicted in the story. Generally, Lost Fleet book covers feature Geary in battle armor in some heroic pose or another at some exotic location. In reality he spends most of his time onboard his flagship Dauntless giving orders from his command chair during fleet or marine actions. In Steadfast, Geary does actually visit Stonehenge on a near future Earth with a broken down war machine parked next to it, but is he still not wearing armor so the cover is not completely perfect What makes this situation worse is that the non-American editions don’t use Geary dressed as a space marine (see the UK cover of Steadfast to your right). Apparently the publisher must think that unless the hero looks like a gun-totting bad ass, Americans just won’t buy a SF book. Morons.

Those complaints notwithstanding, Steadfast was well worth the wait. If you love historical references and mythological tropes set against the backdrop of realistic space combat, you will enjoy The Lost Fleet…just start at the beginning please. Book #10 is not exactly the best place to begin a new series.

AMAZING PEOPLE In the News: John Dodds Releases The Mechanikals