In this week’s viewing: Mushishi takes the week off, Nanana results in an informal poll about pronouns, and more!

Mushishi‘s upcoming special episode is so special, it had to take this week off first. Never mind, we’ve still got plenty to talk about… 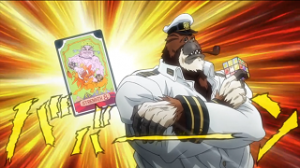 JoJo’s Bizarre Adventure: Stardust Crusaders #7 – Our heroes are picked up by a seemingly abandoned cargo ship full of equipment hazards, but before the day is through, it’s all been explained as the psychic manifestation produced by a cigar-smoking, Playboy-reading orangutan who manages to imprison the entire team and then, for the final insult, taunts Jōtarō by solving a Rubik’s Cube at him. Take that!

You can’t say this isn’t providing exactly what it says on the tin. (Well, except for the stardust part, but if Dio and Granny Enya keep up their expository conversation, I’m sure they’ll get around to explaining that soon.) Or that it isn’t having a hell of a lot of fun providing it.

There’s even a little time left over for some more traveloguing. There were actually never any lions living in the Singapore area, so etymologists think the name must have been metaphorical, but otherwise that tidbit was correct. 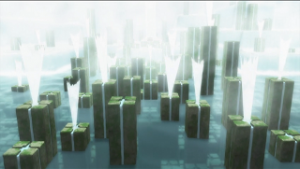 Tensai’s quick deduction is, in retrospect, Jūgo’s key to a quick preemptive strike on the treasure room. Of course that story about getting up early to buy limited-edition pudding sounded fishy from the start, but it’s a sign of how well-developed a character he is by now that you could almost believe that he’d actually do that.

That leaves the question of the staged theft of the fake artifact. Was the original plan that it would be stolen for real, allowing the rest of the club to believe that they’d been successful and just lost a real artifact to the thieves? Or is Jūgo just having an additional laugh at the expense of Yukihime and the Thief of a Hundred Faces, having led them also to believe that the artifact was real?

Now we see what gets Nanana truly angry: being annoying and refusing to acknowledge her as ruler of the apartment is one thing, but not playing her treasure hunt game right? Time for poltergeist mode.

We also return to the question of Daruku’s gender identity. Being biologically male is apprently grounds for a separate room from Tensai and Yū, but Daruku doesn’t join the guys in the men’s pool either. For the time being, let’s strike “trans girl” and just go with “queer”. So, readers, what are your favorite gender-neutral pronouns? Xe/xir/xem? Spivak? Something else? 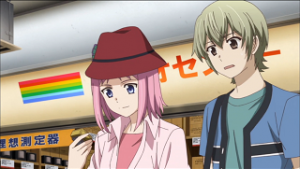 Brynhildr in the Darkness #7 – This episode kicks off with a jerk-around twofer: Kogoro’s pronouncement about crystalline substances provides a handy technobabble way to dangle hope in front of Ryōta and the witches, and then an equally convenient path to end-of-episode drama by yanking the hope away again.

Meanwhile, it’s time for a quick explanation of how Ryōta supports himself, seeing as no parents have been in evidence yet, or maybe that was just an excuse to add another girl who has a crush on him for future teen angst. It’s also time for a shopping trip to Tokyo’s geek district of Akihabara, a prospect which excites Kazumi so much, she puts on some actual clothes.

The crowds of Akihabara also provide the perfect cover for Ryōta to switch on the mysterious device Neko gave him. (I’m not being sarcastic here– if I was in Japan and wanted to hide my usage of a computer that might be emitting some unknown signal, Akihabara would absolutely be the place for it.) It only speaks German, but by an amazing coincidence (okay, being sarcastic now), he just happens to have turned it on in the presence of the one person he knows who speaks it. Although it may not have been the best idea for her to see that message. More suspicion and confusion ahead, I’m sure.

Steve is continuing his very granular, spoiler-filled description and review of James Cameron’s Aliens, arguably one of the few sequels that’s as good as, or possibly better than, the original movie. Steve thinks it’s possibly even better. What about you?

A look at each week’s episodes by two opposing critics, presented in a conversational style

A Solar Storm Is Approaching Earth – Prepare for Aurorageddon