Bill Spangler is returning to the Robotech universe as the co-author of Robotech/Voltron , a five-issue comic book series from Dynamite Entertainment. Issue three of the bi-monthly series came out in late April. 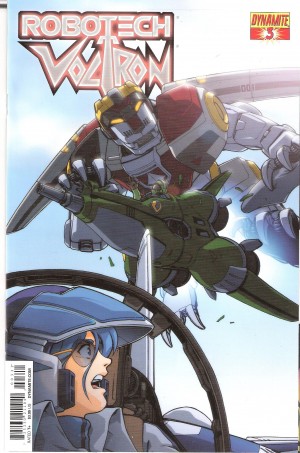 Robotech and Voltron are part of  the wave of anime that came to America in the late 1980s. Both TV series were developed by assembling unrelated Japanese shows, in order to create a package large enough to be attractive for syndication. Robotech is a generational saga about alien races that invade the Earth, seeking control of the ultimate power source, Protoculture. In Voltron, two giant robots fight the Robeasts of the tyrannical Drule Empire. This show is probably best known for the robotic lions that combine to form one of the humanoid Voltrons.

During its original run on TV, Robotech spun off a series of paperbacks and comic books.The paperbacks are now available as e-books , and new additions to the saga are still being produced, as direct-to-video releases.  Spangler has scripted over 75 issues of original Robotech comics, divided among such series as “The Malcontent Uprisings,” “Return to Macross” and “Invid War.”

“This is a great universe to play in and I’m excited to be back,” he said.Robotech/Voltron is co-plotted by Tommy Yune, creative director for Harmony Gold, the company that controls the Robotech franchise. Elmer Damaso is contributing the art.

Spangler blogs about comics and graphic novels for Amazing Stories every two weeks.

AMAZING THINGS You Should Know: 21 Draw

Happy Free Comics Book Day, May the Fourth Be With You and Yes, We Do Need More Diverse Books

Nominations for the 2016 Premios Ignotus award.