There are some writers who loom so large in your mind that it is sometimes difficult to conceptualize that they have become largely forgotten and overlooked. That is how it is for me with Henry Kuttner. I tend to assume that his name is familiar to nearly all science fiction fans. After all, Kuttner and his wife Catherine L. Moore were giants of the Golden Age. Together they wrote such classics as “Mimsy Were the Borogoves,” “Vintage Season,” and “Clash by Night.” If you pick up an anthology that purports to have some of the greatest SF stories of all time, there is a good chance you will find a Kuttner story within its pages.

But then there are the hard and cold facts, testament to the neglect of Kuttner’s work. For instance, in the six plus decades since he wrote the Hogben stories, not once were they all gathered into a single collection. Fortunately that has finally changed. After a successful kickstarter campaign championed by Neil Gaiman, F. Paul Wilson, Pierce Watters, Thomas F. Monteleone and Alan Moore, Borderland Press has put out a signed (by Gaiman, Wilson & Watters) limited edition collection titled The Hogben Chronicles containing all five stories, including the nearly impossible to find first story, “The Old Army Game” (it took Wilson over two years to locate a copy).

The Hogben stories are likely the weirdest humor stories (or the funniest weird stories) you have probably never read. They are the tales of a reclusive family of long-lived, mutant hillbillies forced to move every few hundred years since the sinking of Atlantis. They’ve been hiding out in the hills of “Kaintuck” so long that they have adopted hillbilly mannerisms and speech–all except Grandpaw who stays tied up in a gunny sack and tends to lapse into old English and Sanskrit. The family members are so entertainingly odd that they stay with you a long time, even though specific details of individual characters sometimes change from one story to the next. Neil Gaiman, in his introduction to The Hogben Chronicles, addresses the topic of the malleability of the characters over the course of the series. He also explains how the Hogbens became part of his own personal mythology as a child and later the model for the Hempstock family in his novel The Ocean at the End of the Lane.

The humor works through the voice of Saunk, the second youngest in the family and narrator for all the stories. At times, it comes from his ignorance. For instance, when he is questioned about a uranium pile in the hen house, he says, “We got a woodpile, I know, ’cause I chopped the wood. But I know I never chopped no uranium.” At other times, the humor comes from Saunk tossing out bizarre details about a situation or a family member in an everyday matter-of-fact way, as if, for instance, it is perfectly normal that a baby might have two heads.

Unfortunately, Kuttner only wrote five Hogben stories. We will never know if there might have been more had he not died in his sleep at the age of 42. The stories we do have, however, are excellent. Here are short, spoiler-free summaries of what you will find in each of them: 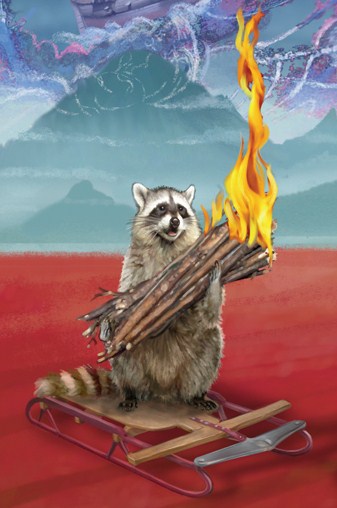 “The Old Army Game” – The first of the Hogben stories is not actually science fiction or fantasy, or however you might classify the later ones. Published in 1941, it is the tale of Saunk getting drafted into the Army. The humor relies almost exclusively on Saunk’s ignorance. Despite being non-genre, it is non-the-less entertaining and fun to read.

“Exit the Professor” – Six years after the first story, the Hogbens return completely revamped. They are still hillbillies, but now they are mutants with unusual characteristics and powers. A professor of eugenics hears rumors about the family and comes nosing around.

“Pile of Trouble” – Forced to move from northern to southern “Kaintuck,” the family moves in with lazy uncle Lem. The locals, led by a corrupt politician, go after the family when they find they have an atomic pile in their hen house. The raccoons are hilarious.

“See You Later” –The patriarch of a family feuding with the Hogbens tries to trick them into making billions of copies of him.

“Cold War” – A mean and ugly man named Pugh tries to force the Hogbens to ensure that his malicious and equally ugly son is able to find a wife and pass on his genetic code—so Pughs can take over the world.

The Hobgen Chronicles make an excellent library addition. The quality of this signed limited edition is outstanding right down to the binding, the paper and the illustrations by Cortney Skinner. But at fifty bucks a pop (one hundred for leatherbound), it doesn’t come cheap. However, I suspect that getting one now will be less expensive than if you wait until these sell out.

In recent years, I do get the impression that there is something of a Kuttner (and Moore) revival taking place. That is a good thing. Despite his apparent reduced stature among genre fans at large, Kuttner has never been short of admirers among professional genre writers. His work deserves to be known, or rather, if you have been a good person worthy of the better things in life, you deserve to read his stories.