Home Review On The Road With Kerouac, Cassady + Cthulhu – Move Under Ground... 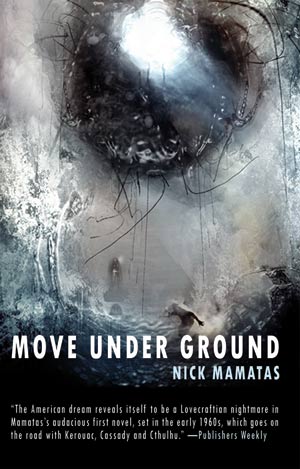 Move Under Ground starts off with Jack Kerouac, dropped out of society, drinking and meditating with the demon Kilaya, until he is set upon by a blasted vision: a green and barnacled city, risen from the deep. That sad day had come: R’lyeh had risen, which means it would only be a matter of time until dread Cthulhu opens his baleful orb, and snuffs out all life, for good.

Kerouac sets out on a series of adventures across the country, to find Neal Cassady, old Dean Moriarty himself; the spirit of America, the Avatar Of The Open Road. He would know what to do. He may be humanity’s only hope.

Except that Azathoth, the blind and crawling chaos who was dominating the Eastern Seaboard had also tagged Cassady as his chosen one. Jack is stuck, counting on the one man who had never let him down, but could sacrifice him at any moment.

They pick up their third wheel, William Burroughs, in a small rural town, when they’re about to be burned at the stake. Burroughs comes in like the calvary, with pistols blazing, wasting cultists left and right. One gets the feeling, whatever bardo he is hanging around in, he’s smiling.

As they make their way across the nightmarish dreamscape of the country, there’s brief cameos from Allen Ginsberg (living in a sewer in San Fransisco), and a thinly disguised H. P. Lovecraft, Mr. Love, who is building a light house in the middle of a Kansas plain, (“Just wait,” he says).

Trainspotting the celebrities is not the only pleasure to be found in this surrealist psychodrama, although it does frame some of the Move Under Ground‘s greatest gifts.

The first, and most noticeable thing about Move Under Ground is its authencity; Mr. Mamatas clearly has a love and deep understanding both of the Beat Generation as well as Lovecraft’s Mythos, and he tells the tale in a sprawling, cosmic stream-of-consciousness style that closely matches Kerouac’s psychedelic dharma.

This stream-of-consciousness also illustrates the effectiveness of the written medium at producing abstract, unsettling sensations. There is a dreamlike quality to this outing, as dusty Kansas streets transform into a river, to rush the heroes to waiting stakes. Humans walk around with beetle heads, and a man snuffs out stars between his fingers.

For those that like their prose, or scares, concrete and tangible, this may not be your favorite book ever, but for those looking for atmosphere, for a clever turn of phrase, or for deep philosophical insights buried between gun fights and train hopping, there is much to devour here.

My absolute favorite thing about Move Under Ground was the concrete embodiment of the Lovecraftian Mythos. Too often, Providence’s favorite son relied upon the unspeakable to seal his plots. His characters get close to these Eldritch Divinities That Walk Beyond The Stars, and go mad, instantly. We are left to wonder what a widespread Cthuloid epidemic of madness would look like.

Honestly, it’s one of the coolest, and most subtle, portrayals of the perils to the modern soul; more evidence that Humanity will go out not with a bang, but with a whimper. Or perhaps no sound at all.

I know what you’re thinking: ‘Yeah, but is it scary?’ Those of you who visit regularly count on me to bring the chills and blood spills, and it is my job, nay, my duty, to bring forth the freshest and bloodiest carcasses, for your appraisal.

And yes, Move Under Ground IS scary. But not in a Stephen King chew-your-fingernails-to-the-bone-way. If I were to be honest and plain-spoken, I would say Move Under Ground is a mixture of The New Weird, championed by the likes of Jeff and Ann Vandermeer, and the magickal realism of Borges and Italo Calvino. It is more unsettling than terrifying, which, in a way, helps it get under your skin and lay some eggs.

Move Under Ground is not a perfect book. As one reviewer on Goodreads.com mentioned,

“However, as an actual plot, waaaaay too much gets resolved by random magic and coincidence and deus ex machina–a point that gets explicitly addressed by the narrator (Jack Kerouac) but not actually resolved in a satisfactory way.”

This goes back to the dreamlike quality of the text, and makes this seem like more of an exercise in style, an elaborate and extended jazz-riff of ‘beatnik vs. lovecraft’, with some sublime moments. On top of this, there were some mis-prints in the freely distributed e-book version that made this seem like an early, homespun effort, which undermines the masterful quality of some of the prose.

But speeaking of e-book, one final thought on Move Under Ground and why it is important and why you should read it. Nick Mamatas gives this book away, for free, in the electronic format. It’s a good example of some of the channels available to the modern author, give away something of value as a way to raise exposure and gain allegiance. Now, there is often a feeling, when something is given away free, that is valueless. It is too easy to forget and dismiss it. It makes you wonder: how many master works do you have on your desktop. at this very moment?

That’s part of why I do what I do, here at Amazing Stories. To dig through the archives, and find the best, and worst, and report back on what I find. It gives me an opportunity to read things I’ve been meaning to get to, an excuse to dig for new and outstanding material, and a chance to support artists that I adore.

Move Under Ground is highly recommended for fans of both the Beats and Lovecraft’s Mythos, and if you’re unfamiliar with either, it’s a good chance to toe in and get used to an unfamiliar style. And if you like what you read, stop by Mr. Mamatas’ web page, and give ‘im a dollar.

If you want a hard copy: Move Under Ground