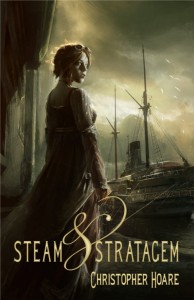 Described by publisher Tyche Books as Steampunk, the novel Steam & Strategem by Christopher Hoare may be more suited for the classification of alternate history. Readers won’t find the genre clichéd tokens of clockwork airships and sophisticated goggles in this novel. As most works of Steampunk are set in the Victorian era, this is an entirely different approach taking place during the Regency era. Regardless of the cataloging preferences, Steam & Strategem is still a vivid read for fans across many of audiences.

Our hero is Roberta Stephenson, the determined captain of the ship appropriately called the Spiteful. The attitude is shared by both the ship and the captain. She is also a woman with professional standing as the successful designer of this prototype vassal, considered one of the most advanced to ever sail. Commissioned to provide a fleet of vessels to face off against Napoleon (who has fared much better militarily in this alternate version of history), she must use all of the tools at her disposal to succeed in a world control by men.

The story does have the feel of a deep rooted mystery as the main character is introduced to spies, powerful leaders and a few influential but far less powerful people. There is also the occasional action packed chapter or moments of wonder scattered throughout. But on the broader scope of the novel, it does move at the slow methodical pace of a well researched piece of work, which could eventually turn some readers off if they are looking for more action and less detailed accuracy.

Roberta’s lavish lifestyle is nurtured in her upbringing. She is the daughter of famed builder George Stephenson, known as The Father of the Railways.” I had to look this one up. George Stephenson was an actual engineer and one of the early pioneers of the steam age. This element may give credence to the “Steampunk” designation as this is also the power source of the ships, but it could also be considered a technical reflection of the time to those more interested in the industrial comparisons.

The real George Stephenson had two children, and his only daughter Frances died within weeks of birth. He did however name his son Robert. This is an interesting piece of trivia as this fictional version of his life has him naming his daughter Roberta. Perhaps this is the author’s insinuation that George (both fictional and real) held more respect for the male progeny.

Readers will enjoy following the intelligent character of Roberta in her travels as she navigates the male dominant world of industrialism. Though she is somewhat obligated to maintain an air of royal decorum and feminine dignity as many viable suitors follow her around attempting to gain her interest, she still stands unyielding beside her male counterparts. The balancing act between loyalty to family and loyalty to country is put to the test as she faces espionage, danger, and even the dreaded possibility of a broken heart as she tries to get her ships built.

It’s obvious from the start that Steam & Strategem is more historical fiction than Steampunk, but Christopher Hoare has clearly done his homework on this one as the attention to detail will shine in the eyes of many readers who are fans of Regency –including those who may otherwise favor a Victorian Steampunk story. The book may seem a bit slow at times, but the vivid imagery and colorful characters help keep the intricate plot moving. In the end, the readers will close the book with the satisfaction of time well spent and looking for the next work by Christopher Hoare.