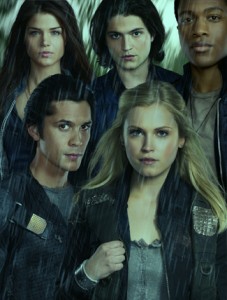 I don’t think the CW has been releasing some good material recently. But I’m quite impressed with the new sci-fi show The 100.

The show is set in the future after Earth is unsafe for humans to live on. Almost 100 years have passed and to keep people on the space station down, anyone that commits a crime is killed, unless they are a juvenile.

In an experiment they decide to send back to earth 100 of the juvenile criminals to see if they can survive.

First off, the show seems to have been invested in. Good writers, a decent set and special effects—the two headed deer is gross, yet almost believable. It’s a relatively unknown cast too. Although the odd familiar face including Isaiah Washington (Grey’s Anatomy) and Henry Ian Cusick (Lost).

I think this is a show that has potential, and may just make it to a full series and beyond. Unlike the short lived Once Upon a Time in Wonderland which has been announced this week as being cancelled. Hopefully that means ABC will focus its efforts back on to the original show Once Upon a Time and make it good again, the whole Neverland storyline just didn’t work for me, but I have stuck with that show because I love it and it is slowly getting back the brilliance of its first series.