Pick Your Favorite Paul Poll: Let us know which is your favorite Amazing Stories cover from the first volume.

Today we start a multi-week process of figuring out what everyone’s favorite Frank R. Paul Amazing Stories cover is.

Paul was the very first Guest of Honor at the very first World Science Fiction Convention in 1939. Fittingly so as he was handed an overwhelming task back in 1926: how to illustrate a ‘new kind of magazine’.

When it comes to the pulp era of science fiction, there is certainly no better illustrator. Other artists are different, as important, as creative, as awe-inspiring, but none are better.

Sometime later on this year, posters and other wall art featuring Frank R. Paul’s cover art for Amazing Stories is going to be available to the general public (which also happens to include fans).

We thought it might be a good idea to see what everyone’s faves are.

Today and throughout the week, we’re asking fans to pick their favorite cover from Amazing Stories first volume. Twelve issues that ran from April 1926 thru March 1927. In the following weeks we’ll ask you to vote on other volumes. Then we’ll gather together the favorites and offer up one final poll to pick everyone’s absolute favorite Frank R. Paul cover.

First, you’ll see a mosaic of all of the covers in question, suitably sized to make a judgment. (If these still aren’t large enough for you, pop on over to our Paul Gallery and take a look there.)  Then, the poll.  Just click on the little dot to indicate your favorite.

We’ll announce the winning cover(s) at the conclusion of this poll. 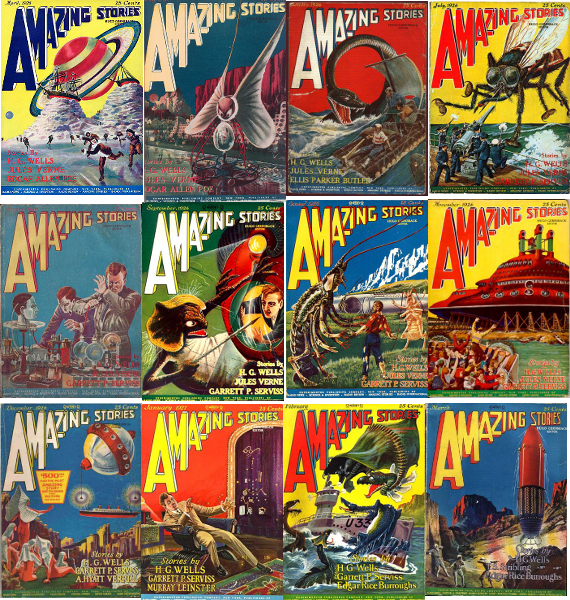 Review: An Ape about the House by Arthur C. Clarke

The July/August edition of F&SF features many stories of dark fantasy and an unofficial theme of the arts.

And the winners are in!