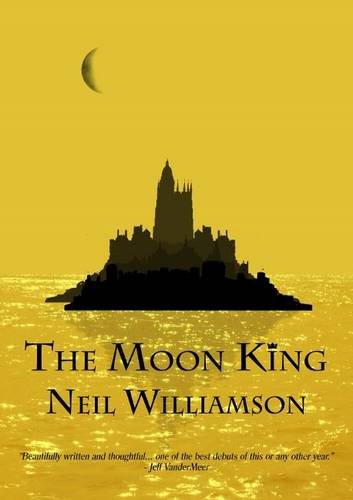 The Moon King (NewCon Press) is the debut novel by Neil Williamson, previously best-known for his short stories, some of which are collected in his British Fantasy Award nominated The Ephemera (Elastic Press / Infinity Plus Books). The novel is set in the city of Glassholm, which is located on a relatively small island. It is the 507th year of the reign of the Lunane.

In the aftermath of the full moon a young man, Anton, wakes to find everyone treating him as if he is the Lunane, the ruler of the city. Only he remembers, and that vaguely, his former life as an engineer who was about to get married. He finds his life constantly documented by the Lunane’s official biographer, but the palace holds no trace of his missing fiance. Meanwhile Lottie wakes from Full to a city unusually troubled by disorder, arson and murder. Cafe owner, Shirley, is haunted by dreams of watery children and ex-policeman John Mortlock is disturbed both by his own disrupted memory and his links to events he would rather forget.

Lottie begins a tentative relationship with relative newcomer to the island, Henrik, all the while keeping out of the influence of her mother, scion of the Church of Women. John and Shirley are gradually drawn together, two damaged middle-aged people getting by in a strange city, while Anton finds the world of the Lunane, and his new role within it, much stranger, but also more intriguing, than he had previously considered.

The truth of what is really going on is layered and complex. The Lunane, the immortal founder of the city – who rescued his people when they fled as refuges from a flood which destroyed their original homeland – is a complex and original character, at once Everyman and the embodiment of his own propaganda. While he is key to the unique puzzle at the heart of the novel there is much more going on in this highly imaginative fable-like fantasy which brims with intricate world-building.

The moon is tethered in orbit to Glassholm, held in place by the power of the Lunane. As the moon waxes and wanes through its monthly cycles so the moods of the people, and the actual physical structure of the city changes. Full moon brings ecstatic joy and hedonistic indulgence, while Dark sinks the city into depression, fear and danger. As the moon wanes so the city physically deteriorates, on the wax some aspects of Glassholm restore themselves.

Vital to all this is the mystery of the Lunane’s true nature, and of the source of his power over the moon. All is held in stasis by now failing technology, legacy of the founders, the secrets of which have long been forgotten. Which is where Anton, the engineer, comes in. And that is all I will say about the story.

The Moon King is for the most part a beautifully written book. Williamson has a good eye for a poetic image, and the whole has one foot in literary fantasy, the other in pulp adventure. Parts of the novel read as modern, New Weird fantasy (in a fantastical city the mundane – Lottie wears jeans, goes to the pub and works as a freelance artist – coexists with the marvelous), while the book could for much of its length be taken for far future science fiction where sufficiently advanced technology is indistinguishable from magic. Yet ultimately The Moon King is best read as science fantasy, some elements remaining unashamedly fantastical, others not fully explained yet seeming right – the author trusting the reader with the intelligence to put the final pieces together into a satisfying whole. It is a novel of discovery, a love story, or two, the detailed exploration of a world. It is packed with imaginative touches, from the nature of the Lunane and his relationship with the moon to the strange watery children seen by night on the city’s streets. It is a political work, outspoken against the atrophying nature of small c conservatism. It is, like the moon, revolutionary. There are possible commentaries about organised religion, though nothing is straightforward. The Church of Women is not the cardboard stereotype of bad religion it first appears to be, just as the villains of the novel, such as they may be taken to be, are not unambiguously bad, but have the nuanced motivations real people who have made questionable, compromised choices.

The Moon King is an exciting debut novel. It fits well into a distinctly British lineage of island-based SF and fantasy. Of islands threatened by, or islanders fleeing from deluge; From John Wyndham’s The Kraken Wakes (published as Out of the Deeps in the US) to JG Ballard’s The Drowned World to Richard Cowper’s The White Bird of Kinship trilogy to Christopher Priest’s novels about The Dream Archipelago (most recently the BSFA Award winning The Islanders), to Stephen Baxter’s Flood.

The world Neil Williamson has imagined is rich and vibrant, and the characters he chooses to tell his story in that setting are three dimensional and involving. There is much to enjoy in The Moon King. it does ultimately ask that the reader accepts a rather fantastical final conceit, but it is one which I think within the context of the novel works. If it does not for you then you may reject the book outright. Ultimately The Moon King is a fairytale for adults, which requires you to accept it for what it is. It is also that rare thing, a modern fantasy novel with a beginning, a middle, an end and a purpose, not the first volume of an endless saga to be spun out forever. For that and many other reasons it is welcomed and recommended.