A look at last week’s episode of Game of Thrones, “A Tale of Two Swords.” 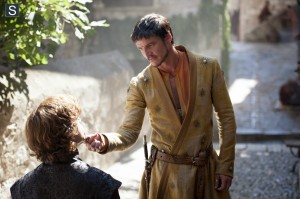 At last, the greatest fantasy show is back. It feels like so long since it has been in my life. It has such a following that we have a Tuesday morning hang out at work to discuss all of the OMG moments of the previous evening’s episode (sadly none of us fancy staying up till 2 a.m. on a Monday morning to watch the episode before we start work). The first statement this week was “Don’t stab a man in the penis. You just don’t do that.” Because of course, it is much nicer to stab a man in the neck or chest.

Last night’s Game of Thrones Episode was entitled Two Swords and that’s exactly what we saw. Robb Stark’s beautiful sword was melted down by Tywin Lannister and made into two swords. As if it isn’t enough to kill the man’s unborn child, then his wife, then him, then his mum, then his wolf and then swap his head for his wolf’s. You had to go and destroy his sword!

Someone alerted me to a Buzzfeed drinking game, and I realised after just 20 minutes into this episode I would be pretty wasted if I had played. But it does highlight that even what seems like the calm in-between the storms stuff was dramatic. But just when I was thinking that this episode was a soft welcome back from the dramatic end to season three, Arya Stark has to go and kill a man where it really hurts.

For those of you that want to avoid the drinking game (I highly recommend it as I don’t think anyone would make it to the end of the show), why not try this other game to find out your Game of Thrones name? Even though in every other game I get House of Stark (got the t-shirt and coffee mat and everything) my name is apparently Pyromancer Samanogon Lannister, The Little Lion. A bit of a mouthful, but I think suits me none the less. I do after all pretty much have a lion-like mane for hair!

After a short absence, Steve returns to bid farewell to a beloved SF author, Vonda N. McIntyre, and to talk about his TV addiction… er, favourite shows!

In this week’s viewing: Megalo Box sets the standard as the spring premieres continue.

Dr. Venus of the World Space Patrol Has Died