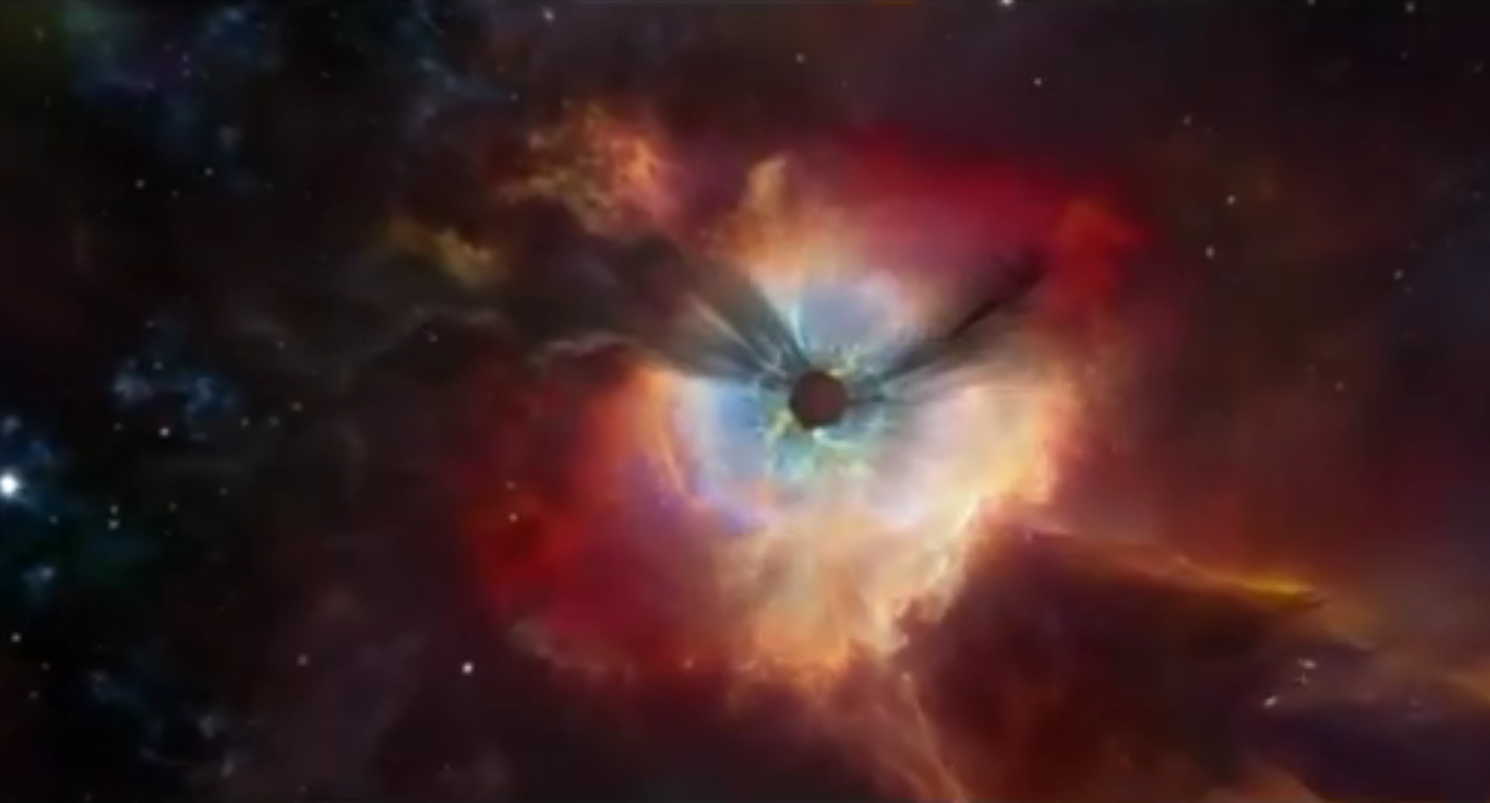 Yesterday evening, Neil deGrasse Tyson, Ann Druyan and Seth McFarlane began a tribute to the late Dr. Carl Sagan with the premiere of the Cosmos reboot.

Not having premium cable channels, I had to watch the show on a Fox network affiliate.  I try not to lend my eyeballs and dollars to Rupert and I was constantly aware of the irony of Fox – champion of science denialism – airing such a pro-science show.  But that is a political discussion and fodder for another day.

The show opened with a pitch from President Barack Obama, one that mentioned Sagan’s import and impact and one that made a plea for a positive future.  This was nice, unusual, it lent some gravitas to the enterprise, but to me it came across as relatively unemotional:  Rah Rah without the kettle drums and tubas. 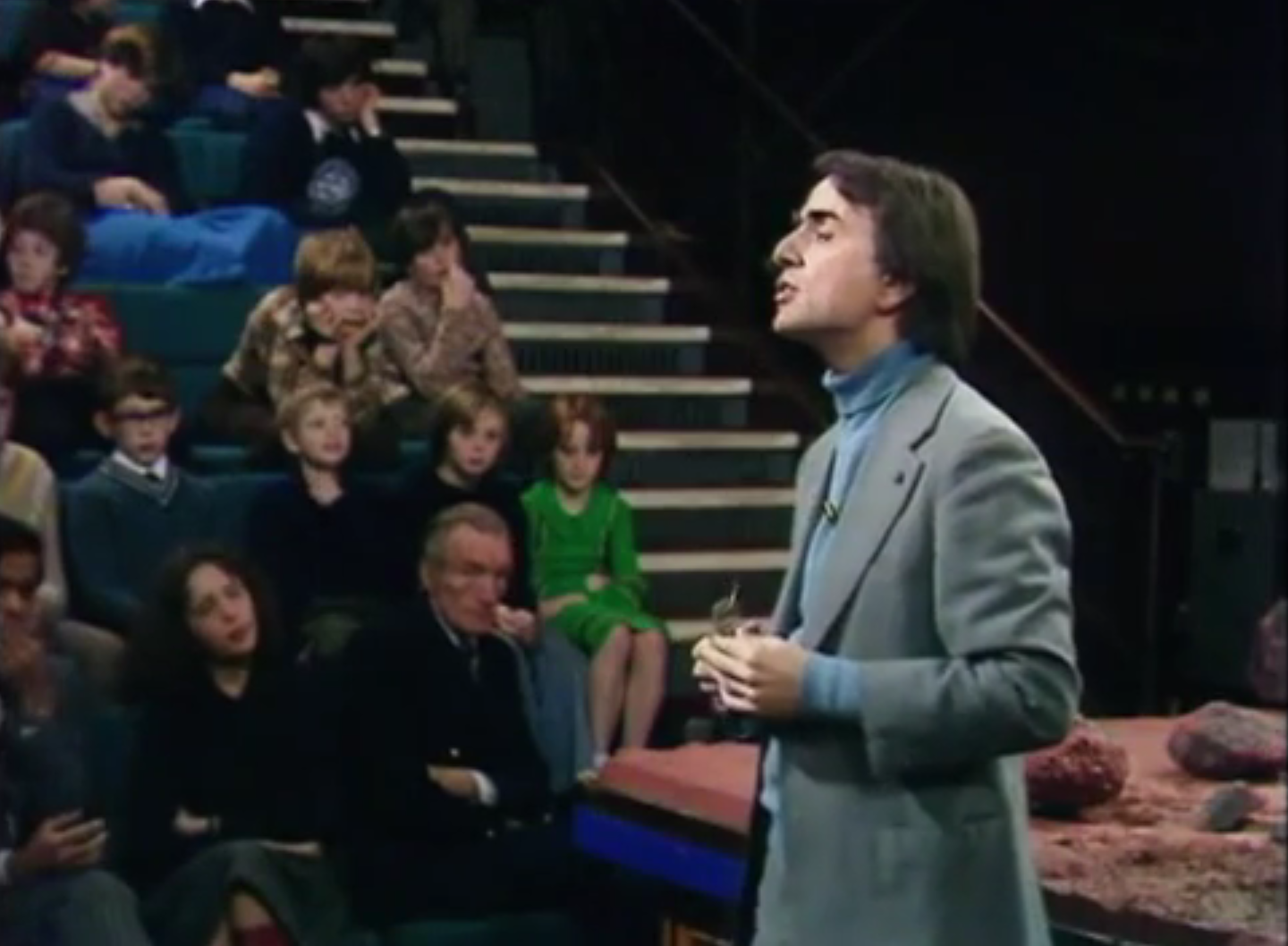 The show itself opened with a brief homage/introduction to Sagan and the original show, presented by deGrasse Tyson from the same locale as the original version utilized – cliffs on the edge of the sea.  We were informed of how influential and prescient Sagan was (he was) and of how important the original show (in 1980) was to science education, the acceptance of science and inspiring a new generation of researchers.

deGrasse Tyson then introduces us to the scientific method –

“This adventure is made possible by generations of searchers strictly adhering to a simple set of rules: test ideas by experiment and observation; build on those ideas that pass the test, reject the ones that fail; follow the evidence wherever it leads; and question everything.  Accept these terms and the cosmos is yours.”

There is a tone here foreshadowing one of the longer sequences (an animated one about Giordano Bruno) that makes it clear that organized religion is going to be the bogeyman of the series (or at least of this introductory episode).

This relatively mild juxtaposition of science with religious belief is a major departure from Sagan’s original series and one that I find disquieting.  I come down firmly on the side of science personally, but if the point of the series is to inspire ALL of us towards a better engagement with and understanding of how science has revealed the wonders of the cosmos to us, we’ve already been let down in the opening episode.  Those who lean towards the spiritual are likely to see this and the later Bruno sequence as attacks on their belief system(s) and will very likely avoid future episodes as a result. 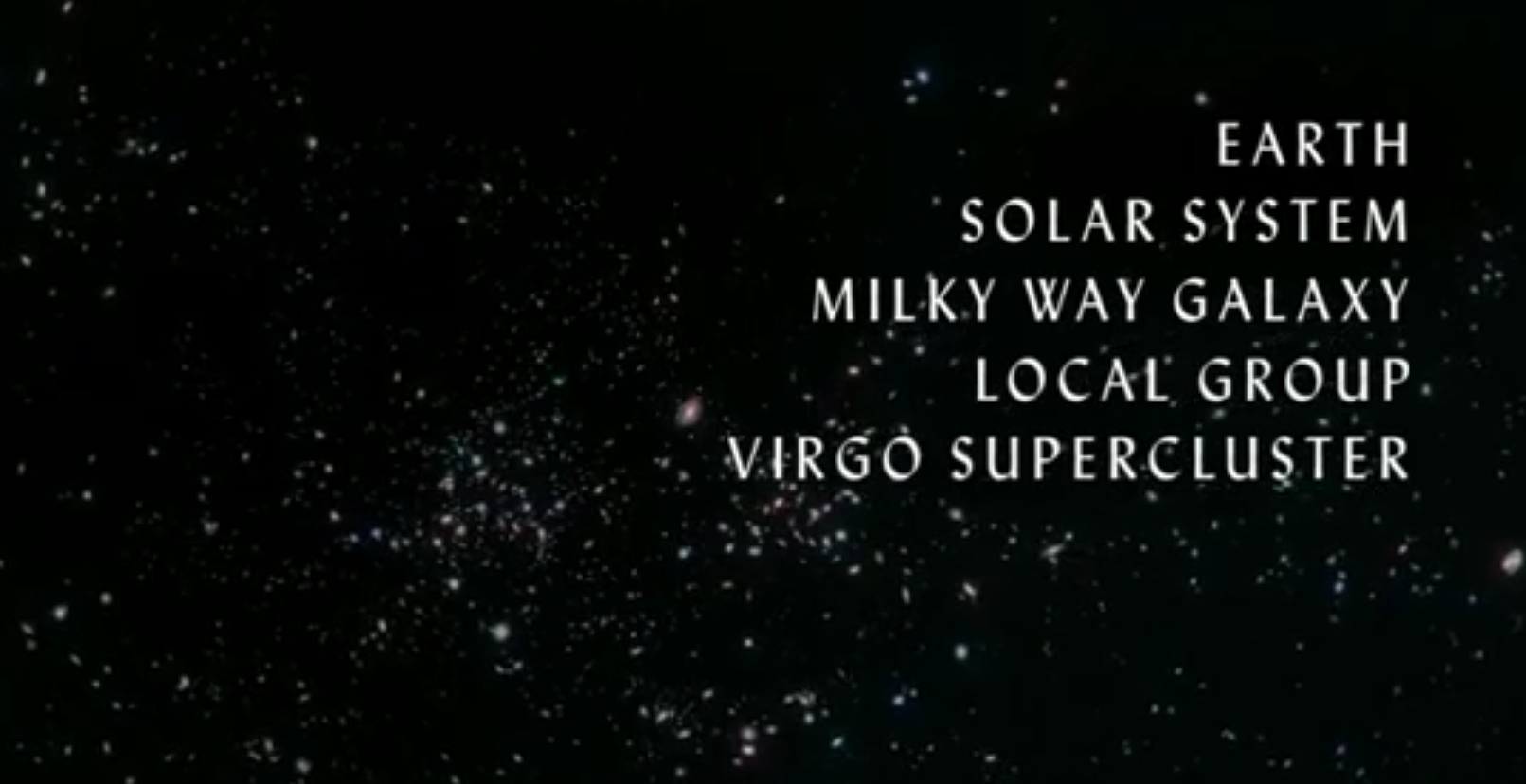 We’re then taken on a ride into space aboard the Spaceship of the Imagination (Tyson briefly explains that we’ll be seeing “where we are” out the front window, that the floor screen opens on the past and the ceiling screen reveals our possible futures – a nice device) to learn our “cosmic address”.  As we tour the universe, pulling away from Earth, we learn about the solar system, the MIlky Way galaxy, the local group, the Virgo Super Cluster and the Observable Universe.  (A nice touch here is the explanation that we call it the observable universe because the light from the unobserved portion has not yet had time to reach us – a staggering thought for those unfamiliar with how much we have learned so far, and of how much is yet to be learned.)

The case for the scientific method is made through an animated re-telling of the story of Giordano Bruno, a monk who is the first person to have envisioned the cosmos as a limitless place.  Although non-scientific (his discovery was via dream and thought-experiment) the episode is used to illustrate the dangers of basing knowledge on belief without evidence and the repressive nature of “thought police” as represented by the Church.  I found the animation to be clunky – or, rather, reminiscent of faith-based cartoon series produced during the 60s.  (This may have been a deliberate take by Seth

McFarlane, producer.)  It was certainly jarring when bookended by some phenomenal CGI of our solar system, the galaxy and the universe. (Which may have also been deliberate on the part of the producers:  you like the sciency stuff, you don’t like the religious stuff.  A bit heavy-handed and juvenile in my opinion.)

There are other swipes at religion:  after a fly-over of the Vatican, deGrasse Tyson is shown walking down a street (presumably in Rome) and says “There comes a time in our lives when we realize we are not the center of the universe. That we belong to something greater than ourselves.  It’s part of growing up.” 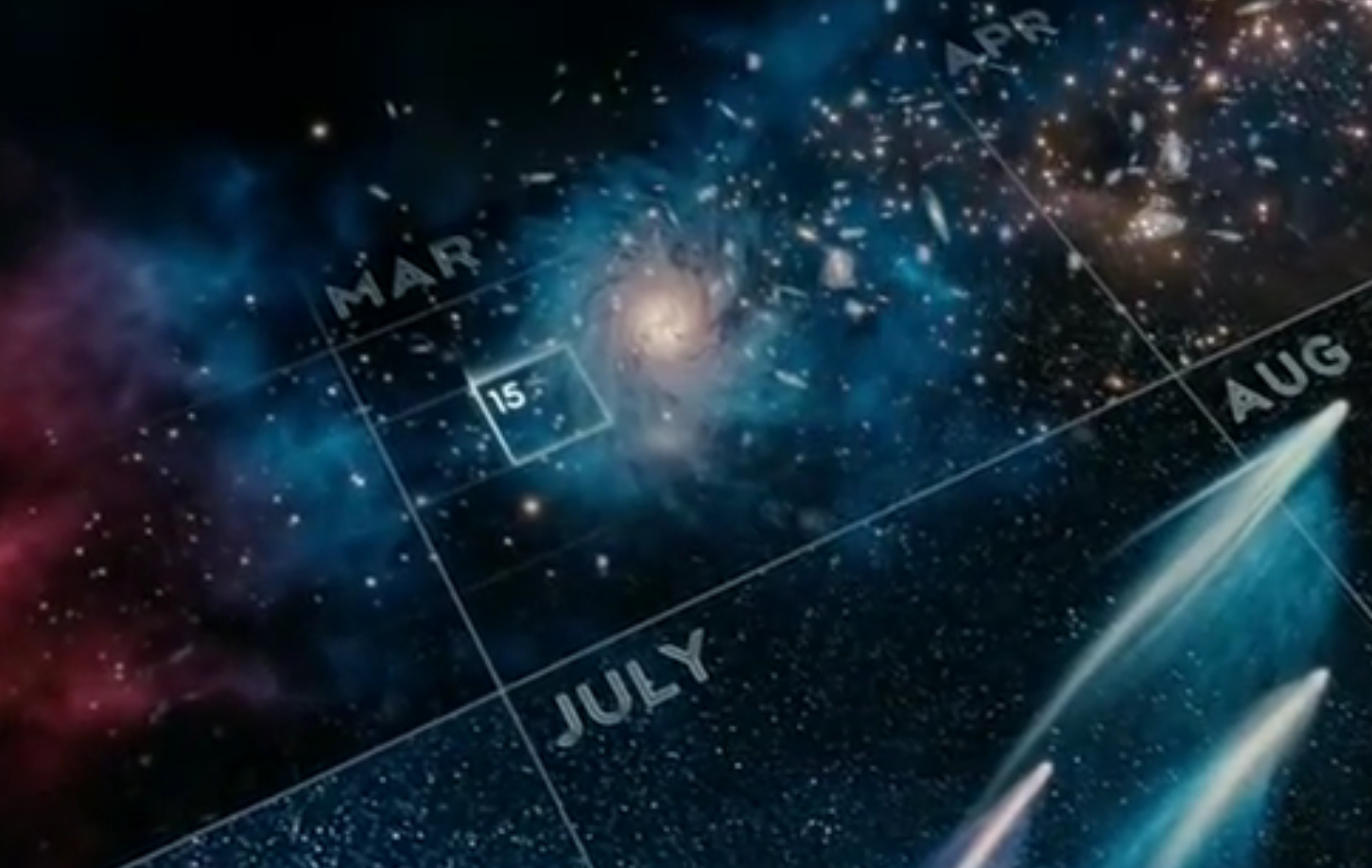 We’re also introduced to the “cosmic calendar” a device that was featured in the original series.  Essentially, the 13.8 billion years of history since the Big Bang are compressed into a single year;  each month represents approximately 1 billion years (1.15 billion to be more precise), each day approximately 40 million years (38.33 to be more precise) and so on.  Through this device we’re able to see that the entirety of recorded human history takes place in just about the last second of the last day of the year.

The general theme here – the cosmic address expanding outwards, the cosmic calendar contracting inwards, is a powerful demonstration of how small and utterly insignificant humanity is and at the same time illustrates how much we’ve learned in what is now obviously a very short time indeed.

The introductory episode concludes with Neil deGrasse Tyson relating how much Sagan influenced his own life;  he was invited to meet Sagan while still in high school, was given a book signed “to a future astronomer” by Sagan.  It is clear that Carl Sagan had the same influence over the younger Neil that he had over the audience who watched the first version of this series back in 1980. 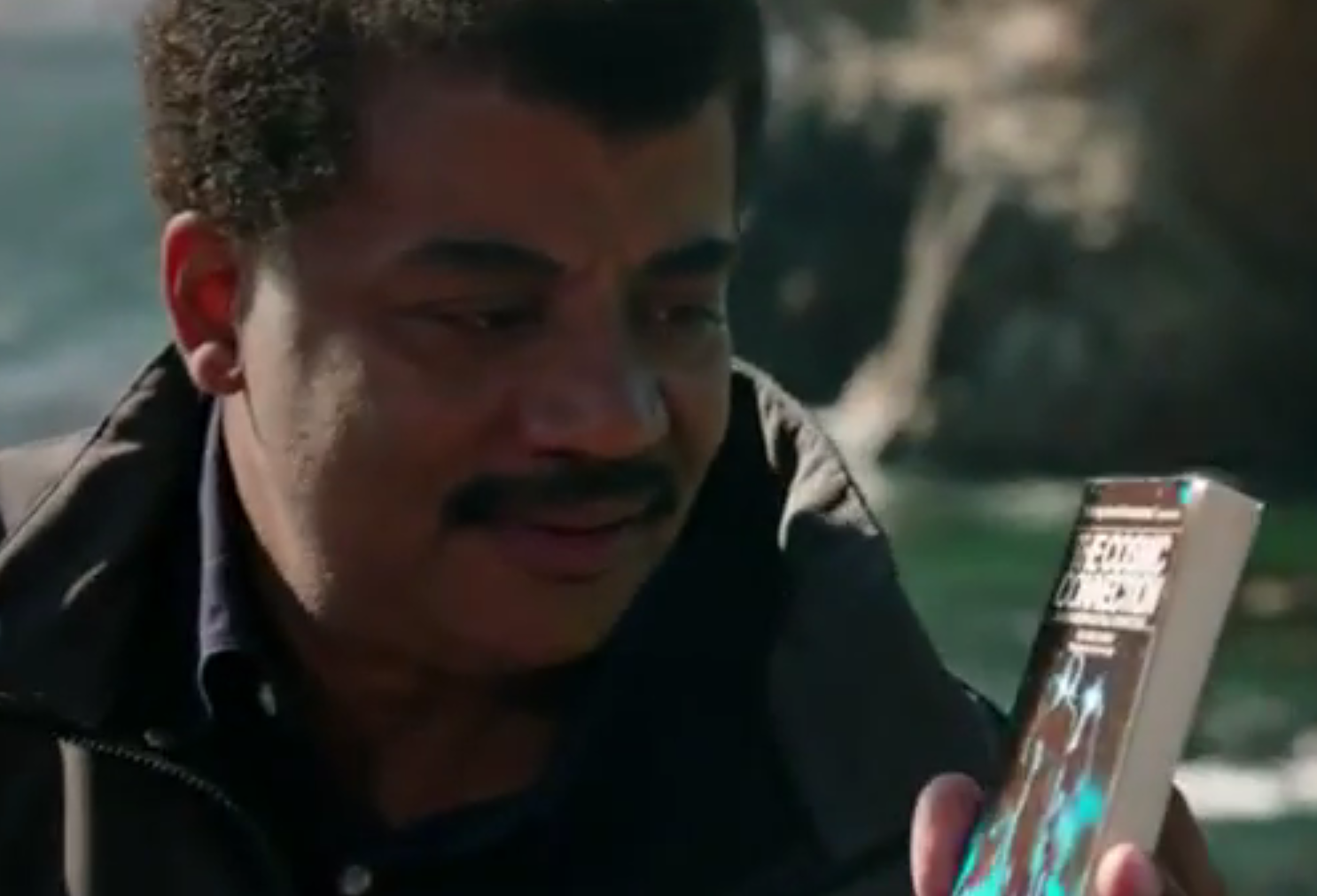 There are several things that irked, bothered or otherwise distracted me from the show beyond the heavy-handed and unnecessary attack on religion; Neil deGrasse Tyson, who I deeply respect and admire, just does not come across as warmly, personably or intimately as Carl did in the original (with exceptions made for his personal Carl Sagan story at the end);  now truth be told, I kept on waiting to hear that “billions and billions” line and never did, but the fact is that Carl came across like a respected member of the family filling you in on some important stuff and Neil seems a bit stand-offish.  That may be an unfair comparison as Carl inspired me tremendously while Neil has not yet had a chance to do so (but I also note that several other reviewers have noted the same difference.  Perhaps it is generational, only time will tell.)

My other quibble is the fact that Cosmos: A Personal Voyage, aired on PBS.  No commercial interruptions.  I found it impossible to sustain any real interest or excitement during the quarterly interruptions for Samsung Galaxy toys (perhaps they should rename their latest offering the Samsung Cosmos…).  As a result of its appearance on commercial TV, each episode is essentially only three quarters as long as the original, which by itself is no big deal, but when you cut that into segments fitted around commercials, well, yes, I did flip over to The Walking Dead (and almost didn’t flip back a few times, despite the fact that I’ve largely lost interest in that show).

Overall, I was disappointed and feel a bit left down – much as it pains me to say that.  Maybe it’s the fact that I was already inspired about this stuff by Carl Sagan (and others since).  I certainly applaud the effort and I don’t think they could have found anyone else to be the host, but I don’t think it is going to be as inspirational as the original.