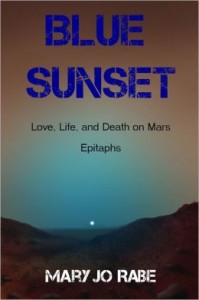 I “know” Mary Jo Rabe through the Science Fiction Poetry Association, but only in the virtual sense. Because she also lived in Germany, where I was at the time, I struck up a conversation with her. It turns out we had several things in common: Being from Iowa (well, I was born there and have extended family there) and my aunt’s name is Mary Jo. Mary Jo the SF poet from Iowa and living in Germany is a warm, open and engaging person and those traits come out in her poetry. Her official blurb is:

between Dubuque and Davenport) and earned a B.A. in German and

Math from Michigan State University and a M.A. in Library Science

from the University of Wisconsin-Milwaukee. She has been employed

in a small special library in Freiburg, Germany, since 1976. She and

her husband live in a small town in the Black Forest of Germany. Mary Jo

is a member of the Science Fiction Poetry Association. Her poems have

been published in Pandora, Stygian Articles, The Martian Wave,

Blue Sunset is her first e-book and is available at most online stores. Blue

Sunset in inspired by two of Mary Jo’s favorite collections of all time, Spoon River

Anthology and The Martian Chronicles. In Blue Sunset, the members of

they write about themselves.

I suspect most of you reading this review are familiar with Ray Bradbury’s Martian Chronicles, but I’d be curious to know how many know the Spoon River Anthology, by Edgar Lee Master published in 1911. If so, was it required reading in school? I was not familiar with it before reading Blue Sunset and I suspect if you are, you might be of a generation or two prior to mine. So, in the event you don’t know, it’s a collection of linked poems set in a fictional, yet typical American town of the early 20th century. Each poem focuses on a single inhabitant of Spoon River and is essentially an account of the person’s life and death told by that person post-mortem. Rabe imitates this structure, but sets it on Mars with the first human colony there. The opening poem is a somewhat enigmatic one. It’s meaning becomes clearer in a subsequent “epitaph” in which one settler (Randolph Slick) tells us how these post mortem records were made possible. As we meet the citizens of Mars that first poem gains in depth as our knowledge increases. Please listen:

It is clear that careful thought went into what sort of people would be necessary in a Martian colony in order to survive as well as to thrive. There are people taking care of basic infrastructure: A cafeteria lady (who is much more than that!), a mayor, a sheriff a garbage man, a teacher, a doctor. There are scientists galore: astrophysicists and astronomers, robotics scientists, a linguist, a mathematician, an astrobiologist and more. There are craftsmen and developers: plastics, bricklayers, tour operators. And there are those who ensure the psychological well-being of the colony: artists, musicians, dancers, a DJ, a florist, photographers and an Elvis impersonator. And Others: a journalist, an archivist, opportunists, a “Bus Driver”, a nutritionist, a lawyer, a mediator, a librarian. Each person’s story is vibrant and naturally many are linked (by Hyperlink even). Some characters recount how they ended up on Mars:

It made things grow.

Our farm in Iowa could have given

The Garden of Eden some stiff competition.

Mars was the ultimate challenge.

They planned to rely on hydroponics at first.

And others’ stories begin on Mars:

I was a disappointment to my parents.

They were gung-ho scientists,

A physicist and biologist

Who made names for themselves on Earth and Mars.

I just never got math or science.

And I had no talent that anyone could recognize.

Out of desperation I started accompanying the tourist hordes

On bus trips across Mars.

When I discovered the red sand dunes,

Suddenly I knew what I wanted to do.

The language of the poems is colloquial and strictly narrative. After all, these are people talking to themselves after death has claimed them. It’s often closer to prose with frequent line breaks, but nevertheless this was an extremely enjoyable and engaging read. I recommend it to anyone with a fascination for people, our relationships to one another and our environment and, of course, for Mars.

Please have a listen to a few of the characters:

Stay tuned for the next installment: Another genre poetry round-up!