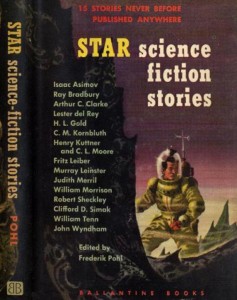 The recent highly publicized Evolution vs. Creationism debate between “Science Guy” Bill Nye and the Creation Museum head Ken Ham stirred some interesting follow-up discussions across the internet. But this wasn’t the first time (nor will it be the last) the differing models of science and faith have been considered. But hey, this is Amazing Stories, so some of us prefer to look at the science fiction aspect of topical issues.

Now there are classic science fiction stories, and then there are classic science fiction stories used by educators to introduce young impressionable readers and writers to the age old argument of science and religion. The Nine Billion Names of God by Arthur C. Clarke is THAT kind of story. This very short tale was first printed in the 1953 anthology Star Science Fiction Stories from Ballantine Books edited by Frederik Pohl. This analysis is based on the version printed in the 1978 Puffin edition anthology of The Worlds of Arthur C. Clarke, Of Time and Stars. In what starts out as a social examination of man’s view of our existence through scientific competence, the story quickly becomes a weighty question regarding the cause and responsibility of a doomsday.

A successful Manhattan computer company is hired by a Tibetan monastery to provide them with the latest and greatest Mark V Computer to assist them. They believe that an Automatic Sequence Computer can be modified from numbers to letters and help them create the seemingly infinite list of all possible names of God. A task that has been taking over three centuries may be able to be completed in a matter of months. Why?

“They believe that when they have listed all His names – and they reckon there are are about nine billion of them – God’s purpose will be achieved. The human race will have finished what it was created to do, and there won’t be any point in carrying on. Indeed, the very idea is something like blasphemy.’

‘Then what do they expect us to do? Commit suicide?’

There’s no need for that. When the list’s completed, God steps in and simply winds things up… bingo!’

The sale is made and the process begins. But as the task comes to a close and the list of names is almost complete, two programmers assigned to the job begin to question the credibility of the monastery’s prophecy and their own role in the fate of the world.

The character vagueness within the story gives the reader a sense that this is more of a wide spread social examination of ideas rather than a secular examination of a specific group. The same questions can be posed by anybody. But the fast paced plot and brief overall length allows the reader more time for interpretation and discussion. This is the thing of debates.

For such a short story, The Nine Billion Names of God has a lot to say about faith, fate, and hubris while leaving a lot to the imagination. It makes sense that the story by Arthur C. Clarke finally won a retrospective Hugo Award for best short story. It has become a staple in not only the art of writing compelling science fiction, but the art of examining critical issues that may well be questioned till the end of time. Well, at least until the stars start to go out.