This week I’m continuing in my series regarding Author’s income. If you haven’t read the other posts here they are:

One of the advantages that traditional publishing has is extensive print distribution. When I was self-published my print sales were a small fraction (about 5% or less depending on the month) of my total sales. Most self-published authors I speak to only see 1% – 2%.  But what kind of money are we really talking about?  Today I want to explore a typical mid-list author’s sales.

To do this analysis I used Bookscan data. Bookscan is the industry standard when it comes to how many print copies are sold in the United States. Run by the Nielsen Organization (the same ones that track TV shows), they track weekly point-of-purchase sales for books.  This means books that actually walked out the store, bought by a real person…not books that left a warehouse and may or may not be on a shelf in a store.  Nielsen estimates their numbers to account for 75% of all sales made.  Depending on whom you are published through, Nielsen numbers could be way off. I’ve heard some people from small presses complain that bookscan is only picking up 20% of their sales, but for a book from a major publisher I do think they are capturing pretty accurate data.  For my own books, I’ve seen that Bookscan is pretty consistently at 68% of my net sales.

To run the numbers I picked a “representative” mid-list author. The book I selected came out over a year ago, is the first in a new series, is released as a trade paperback, and the author had previously published six books across two series.  They are well known and well respected and based on my knowledge of the industry I would call them a “good solid mid-list author.” This is the type of author who has established themselves as a “name” in the industry and would likely not have any problem getting any new books picked up.

Let’s first look at the week by week sales for the first 60 weeks: 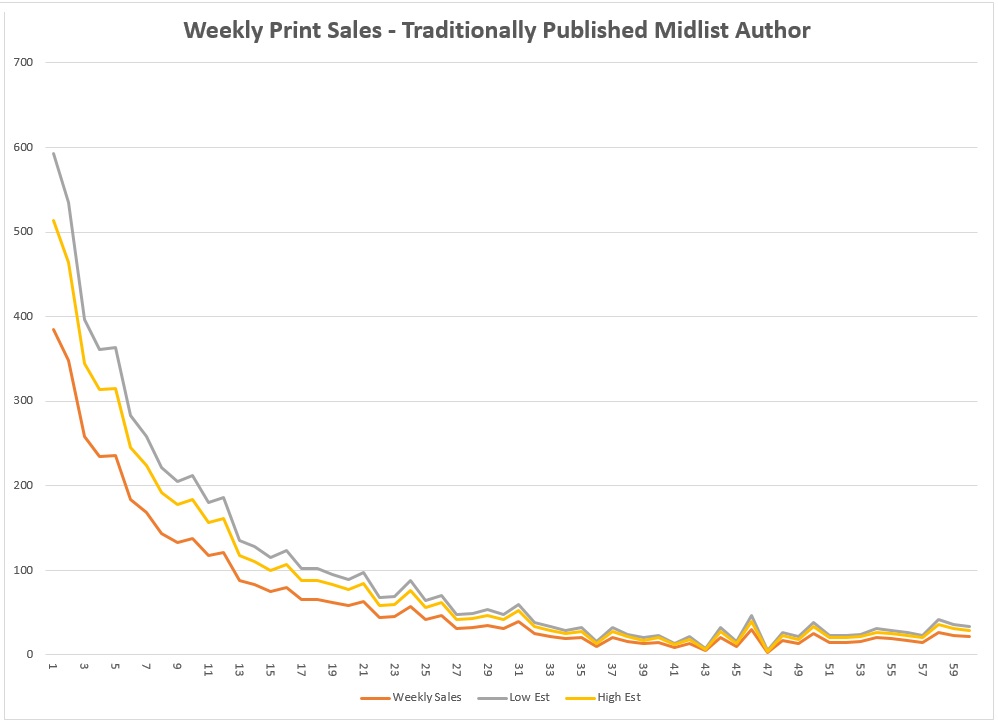 This graph is very representative of hundreds of sales profiles I’ve seen over the past year. It shows extremely strong sales in the first few weeks and then a stabilization as a much lower level, which generally extends for quite some time.  The height of the original max, the amplitude of the on-going sales, and how quickly the decay occurs will depend on the author and how well known they are. Because this is a well established author, from a highly respected big-five publisher, their decay was slower than many and the steady-state sales were higher than most.

There are three lines because I plotted the actual numbers from Bookscan, and then I calculated what their sales are at 65% (a little less than I get), and then at 75% (the maximum number Nielsen says they capture). So I think it’s safe to say that the author’s actual sales fall within this range.

To look at this data just a bit differently I also plotted it in 4 week increments so we can see approximately how many books each month are sold. 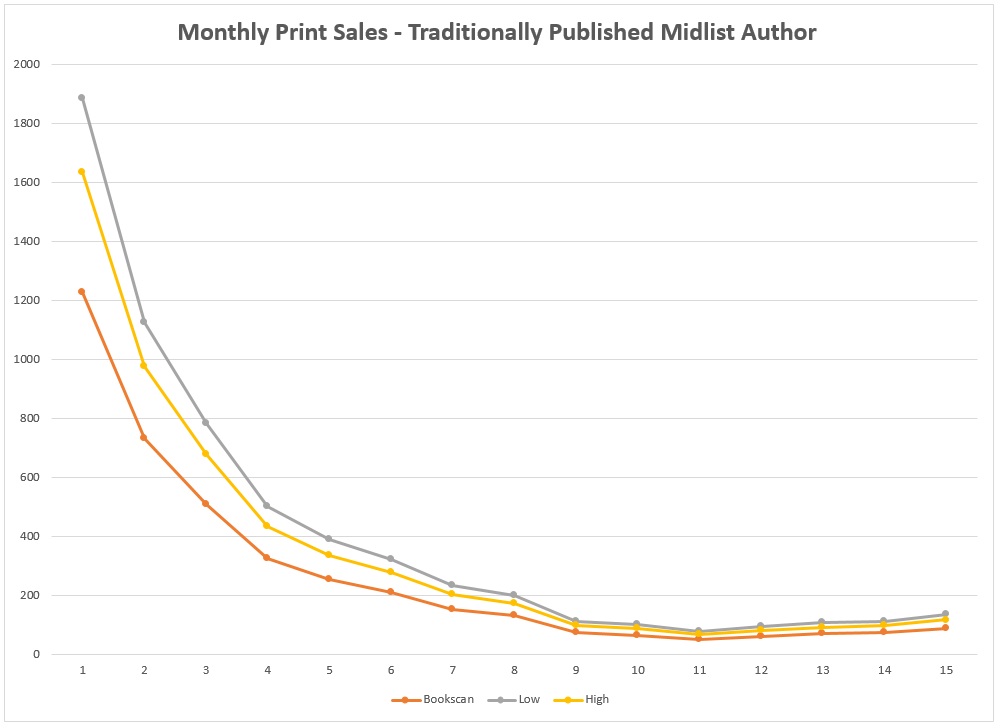 Looking at data this way we see that around the 9th or 10th month sales have fallen of considerably. This is EXTREMELY good.  I’ve seen other authors whose data goes down to just a few sales a week in as few as 6 or 8 weeks. So again I think this person represents a good solid mid-list author with a graph that looks like that.

This particular book sells for $15.99 and I’m pretty sure this author is getting a royalty of 7.5% of list price. So for each book sold they make $1.20 before paying for their agent and taxes.  Given this a good estimate of their income for this title can be estimated. 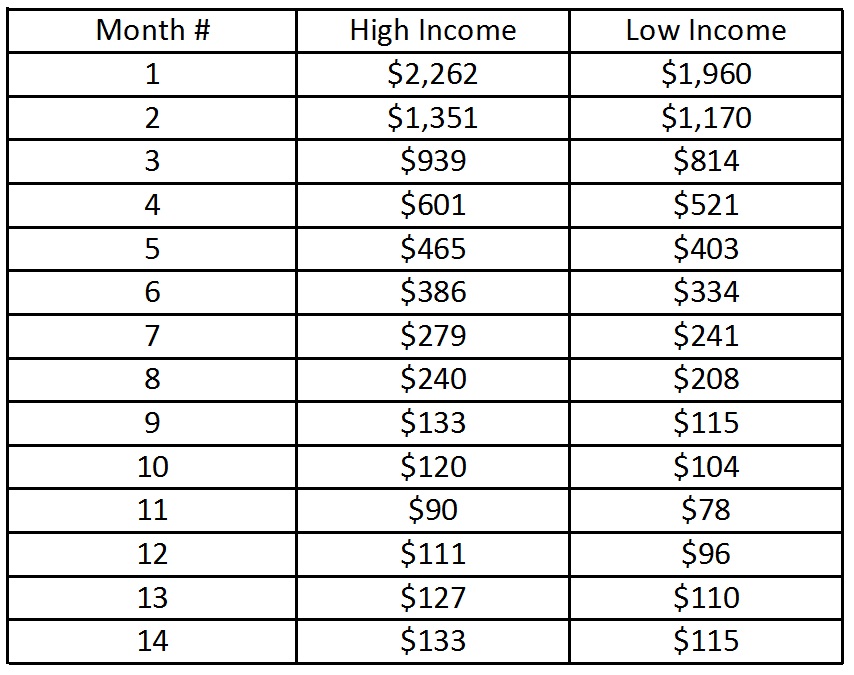 For the first three months they are making some decent money. Probably not enough to live off of, but keep in mind this author has more than just one book.  Still, most of the other books probably aren’t producing any serious money given the age of several of the titles. I might do some analysis on them at some point but for now let’s just look at a book by book basis.

This $6,000 – $7,000 figure will be an important one to look at when we go back to the data from my second post and look at the ebook income.  If the self-published authors can earn more than this on just their Amazon sales then self-publishing is the best route for them (if maximizing income is the goal). If, however, their ebook only sales can’t make up for any decrease in loss of print, then traditional would be the right route for them to go.

More on this next time.