Is six Californias a possibility or just an alternate history dream? 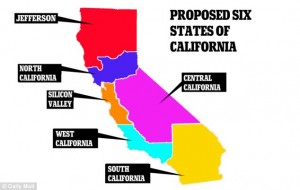 Creating a new state in the United States of America out of an existing state is a difficult feat. The Constitution requires both the legislature of the state to be affected and the Congress of the United States to approve the separation. So far it has only happened twice in the country’s history. Once to prevent a civil war and once because of a civil war. So the situation usually has to be quite extreme for it to work out, but venture capitalist Tim Draper thinks the time is right for California to be split up into six different states.

According to Draper, California is too large to be governed effectively and should be split into several smaller states. He calls it the Six Californias initiative and at the very least has caught the nation’s attention. Before you dismiss this as a pipe dream (remember California hasn’t legalized that yet), Draper already received approval from the state to begin collecting the over 800,000 signatures he needs to put his proposal on the ballot. The deadline is July 18, 2014.

Here are the six proposed states:

Reaction to Draper’s proposal has been one of great skepticism. Besides the legal hurdles mentioned above, Draper and his supporters would still need to convince voters that splitting the state would be a good thing. California’s economy is the 12th largest in the world according to Wikipedia, but wouldn’t splitting the state cause significant disruption to it? What about the drought California is currently suffering? Would six state governments really be able to effectively manage the water better than one?

Even if Draper does convince Californians that his proposal is sound, there is no guarantee the rest of the country will go along with it. Splitting California would disrupt both the electoral college and the Senate (which would get 12 new senators). Perhaps Republicans might back the plan to break the Democrat majority in the Senate, but then again it could blow up in their face and leave them with an even stronger Democrat majority to contend with.

We also need to ask whether there is a darker reason for Draper’s Six Californias. Silicon Valley hasn’t had many good things to say about the less fortunate of America. A recent government report also confirms that under Draper’s plan Silicon Valley would become one of the richest states of the Union, while Central California would become one of the poorest. Is Six California just an attempt for the very rich of California to keep their tax money from being spent outside of there home region?

Attempts to split states like this are not new (see North Colorado for a recent example) and usually are done for socio-economic reasons, instead of racial, ethnic or religious reasons. California itself has a long history of people trying to split it up, which has inspired some alternate map-makers like the one you see below. In recent years, it is more often a rural, conservative region of a state attempting to separate itself from the influence of a more urban, liberal region. There are exceptions, of course, including an attempt by the more liberal South Florida (which would include the city of Miami) to break from the conservative state government. 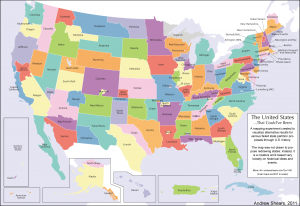 Regardless of politics, most of these proposals tend to be short-lived and don’t amount to much. Splitting a state might seem like a simple solution to people who feel frustrated with their state government, but simple solutions are rarely (if ever) effective measures to solve complicated issues. Citizens tend to find the benefits of sticking together as a state outweigh the costs of regional differences. Plus the American political system means that if your guys loses one election, we accept that it is unlikely the other guy will screw up too badly and there is a chance next time the vote will go where you want it to go.

So for all those reasons and more, it is unlikely we will see 55-star flag anytime soon. Still one of the great things about alternate history is the knowledge that history is fragile. A tiny change could have big consequences down the road. So if Draper really wants six Californias, perhaps he should invest in a time machine instead of a ballot measure.