In 1951 the 9th Worldcon “Nolacon” took place in New Orleans. 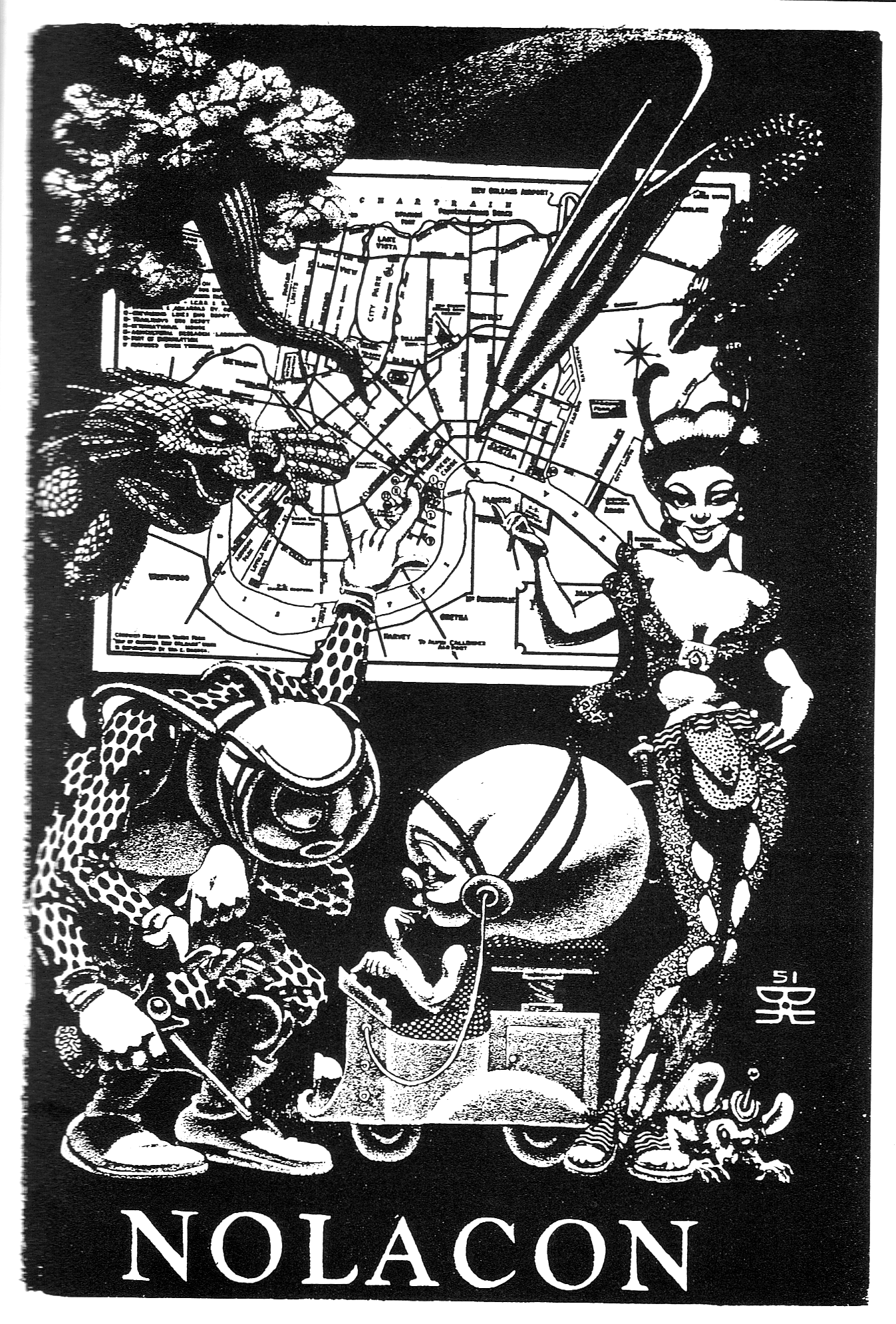 It was quite the con. Fritz Leiber was GOH, and other pros attending included Robert Bloch, Fredric Brown, Judith Merril, E.E. ‘Doc’ Smith, L. Sprague de Camp, editor John W. Campbell and artist Hannes Bok (who did the program book cover – see illo). Famous fans present included Sam Moskowitz, Bob Tucker, Dave Kyle, Roger Sims, Terry Carr, and Lee Hoffman. The latter, editor of the very popular fanzine QUANDRY, whom everyone assumed was male, turned out to be a young woman, a ‘revelation’ which greatly startled even those who had corresponded with her. The other fannish ‘legend’ associated with Nolacon I was the party held in Room 770, forever after held up to be the supreme example of what a room party should be. All in all, a highly successful and stimulating Worldcon.

Especially for one 18 year old kid named Norman G. Browne who hitchhiked down from Canada.

As Nolacon Chairman Harry B. Moore put it:

“It is an exceedingly rare thing to find a fan with guts, self-respect, tenacity, responsibility, dependability, or honor. Your feat of hitchhiking… stands out astonishingly amidst such a morass of pseudo-persons…”

Browne later wrote of his experience at Nolacon:

“For 5 years I had read STF, but had no knowledge that fandom existed, and had never met anyone who even read STF. On August 31st at 3:00 PM, I walked into the lobby of the St. Charles hotel in New Orleans and met my first fan. I consider that date and time as my entrance into fandom.”

Not that it was easy:

“At the Nolacon, I was an outsider, an onlooker; I knew nobody and nothing. I felt strangely set apart from these people who were fans. They talked and acted beyond the powers of my comprehension and understanding. They talked about people, places, and events of which I had no knowledge. To me they seemed to be talking on a higher plane, a plane far, far beyond my reach. Knowing so much about what they discussed, they seemed to be combining telepathy and speech in their conversation. It was interesting—in a tantalizing sort of way.”

“I left Nolacon with an overwhelming desire to become a fan; to become one of them, to talk with them in their language, to understand what they understood, to enjoy what they enjoyed.”

You might say Norman was determined to bulldoze his way into the top ranks of fandom.

“My original ambition was to become a fan—a relatively simple goal. But, although that ambition had been realized, my final ambition has not. For as I progressed into fandom, as I studied and learned, as I matured, my final goal raised accordingly.”

“In my first year I progressed from a non-fan to a fringe-fan, to a neophan, and finally to a master-fan. Who knows how far I will go in my second year? Would anyone deny me the ambition of becoming a BNF or a super-fan?”

Perhaps Browne never understood that the status of BNF is an accolade and not just some sort of prize you reach out and grab. Or as one of his correspondents put it:

Certainly Norman possessed a healthy dose of ego, or at least a great deal of confidence. As soon as he returned home to Vancouver, B.C., he sprang into action:

“My first act when I got home… was to organize a SF club. This took considerable time due to the fact that I had no knowledge or experience in fandom or STF and knew nothing about organizing clubs. But by dint of sheer work and luck, the club was organized and had its first meeting in December of that same year (1951). At a later meeting I was installed President of the club.”

“As President of the Vancouver SF Society I pushed STF (Scientifiction) and my club as hard and strong as I could in my immediate area. Gradually, I extended this sphere of influence to cover the whole of British Columbia.”

The informal name of the club was ‘The Hibited Men,’ (the opposite of inhibited?) evidently based on a short story by L. Sprague de Camp titled ‘THE HIBITED MAN’ which appeared in October 1949 in THRILLING WONDER STORIES.

The club produced a newsletter called ‘HIBITED HAPPENINGS’ of which Norman edited the first three issues, with Frank Stephens taking over as editor when Norman moved to Edmonton in November of 1952. The club carried on into 1953 at least, but its ultimate fate is unknown to me. 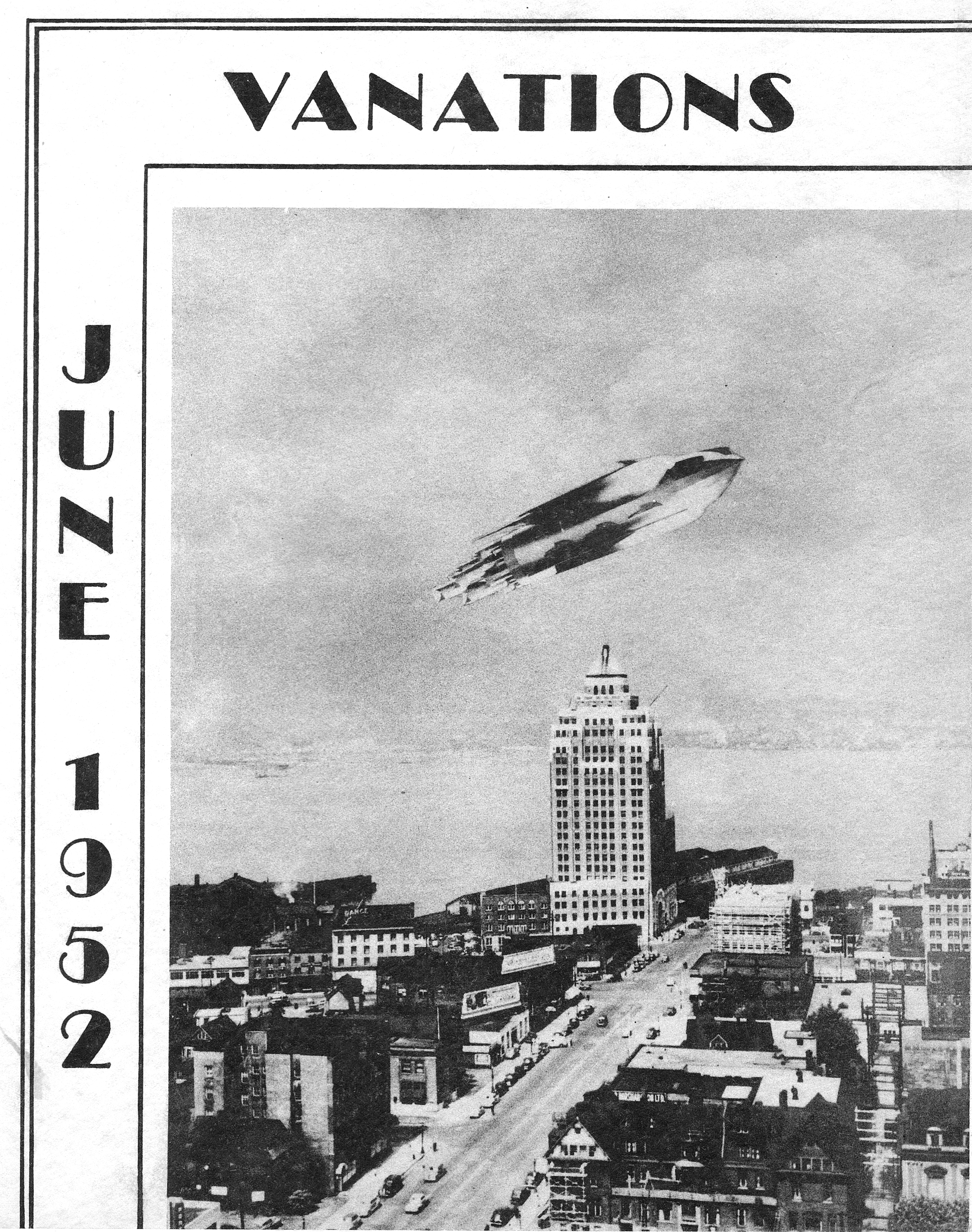 What is certain is that members of the club helped Norman prepare the first issue of his perzine ‘VANATIONS’ which, however, was published out of Edmonton along with 5 subsequent issues. The first has a striking cover, a photographic collage featuring the original Flash Gordon-style spaceship sculpture which used to be on display at the Vancouver Airport (till discarded in a city dump—a 1986 duplicate made for Expo 86 now stands on a pedestal at the south end of Cambie bridge) ‘flying’ over the Vancouver skyline above the Marine Building, harbor, and North Shore Mountains in the background. Beautiful. Both photos were taken by Frank Stephens and the cover printed at UBC.

‘VANATIONS’ could be described as a humourzine with fiction, sercon articles and poetry, with the quality ranging from good to unbelievably bad. Contributors included the likes of Richard Bergeron, Robert Bloch, Alistair Cameron, Chester D. Cuthbert, Marion Zimmer Bradley, and even Harlan Ellison! An instant hit!

Perhaps the most innovative aspect of the zine was the first issue’s introduction of his ‘P.A.R.’ or “Pay After Reading” system of payment. Basically people were asked to send him whatever they thought a given issue was worth. Fewer than 50% of his readers responded, and payments ranged from a single dime to a couple of quarters. In short, his unusual ‘P.A.R’ subscription system merely helped defray the cost of production a little. One reader asked why he didn’t give it up, and he replied:

“Hah! And be the same as everyone else? Do you realize how much publicity I and Vn get through the PAR system? It pays to be different.”

Publicity was ever on Norman’s mind. He printed 500 copies of every issue in order to make as huge an impact on fandom as possible. As he blithely explained in issue #4:

“I keep about 25 for later requests… and distribute the rest in fandom. As a matter of fact, my distribution list looks like a directory of fandom. All BNFs get it, many pros get Vn, most members of NFFF, BSAW & FAPA get Vn. Besides this, about 50 are distributed in Canada, and another 100 are sent to miscellaneous fen in the States, England, and Australia.”

Without a doubt, Norman was determined to reach out to each and every fan of consequence.

Speaking of FAPA, he joined that venerable APA in February 1953, where he got into some trouble describing his APAzine ‘CONCUPISCENT TALES’ which he purportedly wrote for PAPA, the PORNOGRAPHIC APA. This, however, was but a hoax on his part, yet another example of his attempting to cover all fannish bases. Another example was his habit of referring to himself as the ‘Doctor of Fanology’ in the hope the title would catch on.

The tile of his FAPAzine was ‘DAMN!’ by the way. Suitably assertive. It seems Norman was VERY assertive.

References to POGO in ‘VANATIONS’ made the zine very much a part of ‘6th Fandom’ (fantiquarians had come up with a scheme of numbered fannish eras). But the last issue, the 6th, declared itself “A 7th Fandom Fanzine.”

Astoundingly, Norman had been present in May of 1953 at HEcon (Harlan Ellison Con) in the Cleveland home of Harlan Ellison, a gathering whose purpose was to establish 7th Fandom.

I do not know if Norman was part of the Seventh fandomite contingent invading the Fourth Midwescon where 7th Fandom (and its symbol, a red birdbath) was first paraded before disconcerted fandom, but he did attend Philcon II, the eleventh Worldcon, held in Philadelphia in September 1953. There he was photographed with Harlan, a drawing based on this photo appearing in CANADIAN FANDOM #19 (Dec 1953—see illo—Norman on right). No doubt he took part in any and all merry pranks as, according to Rich Brown, he was “one of the leading lights of Seventh Fandom.” 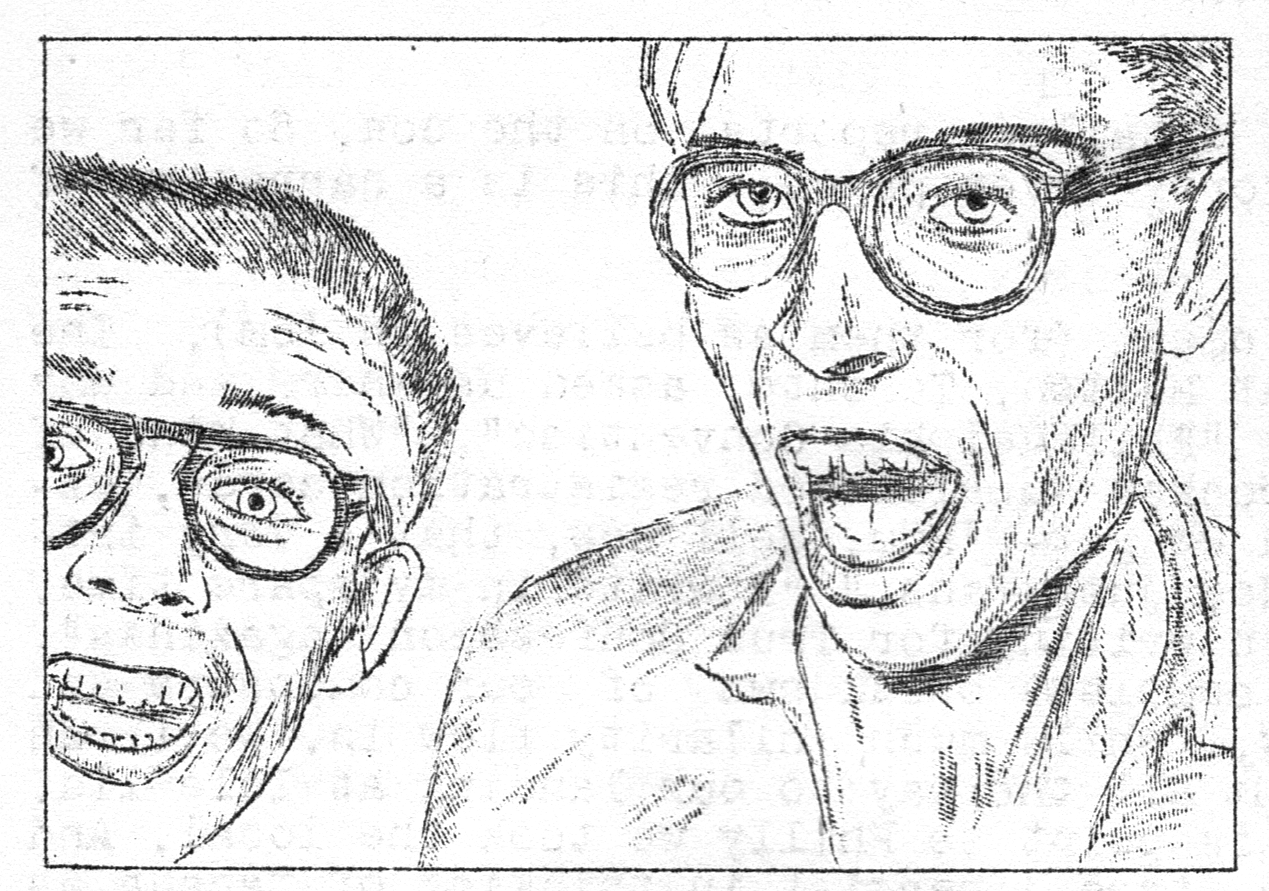 However, Norman soon got on Ellison’s nerves. Norman seems to have been possessed by a crusading zeal which Harlan found too confrontational (hard to believe, given Harlan’s reputation, but apparently true). That Norman wanted 7th Fandomites to deify Dean Grennell was harmless enough, but his plot to infiltrate FAPA with 7th Fandomites to the point of taking over through sheer numbers seemed likely to give the movement a bad reputation. Harlan also didn’t like some of the 7th Fandom broadsheets Norman was writing and distributing. At some point, in reaction to all the criticism, Norman quit the movement in anger.

Why deify Dean Grennell? Because earlier in 1953 Dean (under the name Art Wesley’), the editor of ‘GRUE’ published out of Fond Du Lac, Wisconsin, had co-edited with Norman Browne a one-shot titled FILLER, consisting of 527 numbered ‘filler’ items, most of them single sentence comments (interlineations). The idea was that fanzine editors, cramped for space, would type in the appropriate number and leave it to the readers to look up the actual ‘filler’ in FILLER. This concept proved very popular. So why not reward Dean by making him a Ghod?

At any rate, leaving 7th Fandom seems to have deflated Norman’s ambitions. In December of 1953 he moved to Wilson Heights, Ontario. There he produced a new perzine titled ‘TORATIONS’ (about which I know nothing), wrote occasionally for ‘CANADIAN FANDOM,’ and as late as September 1954 attempted to get a second issue of ‘FILLER’ off the ground. It was described as a CAFP (Canadian Amateur Fan Publishers) publication, which suggests Norman was going it alone with no involvement by Dean Grennell. It seems never to have been published.

Norman’s last known piece of fanac was his final issue of ‘DAMN!’ for FAPA in February 1956. After that, nothing. Complete gafiation (getting away from it all). Eventually even his relatives lost track of him. His fate is unknown.

A Mayfly. Approximately four years of excited fanac seeking to reach the pinnacle of fandom, then disillusionment, gafiation, and now largely forgotten. But at least he tried. An effort worth celebrating.

In 2005 I was in personal communication with his sister Wenda. I will let her have the last word:

“I do know that the Vancouver club was the best of all his endeavours. He was so happy then and his mind was so active and imaginative. He knew so many people and so many knew him or of him…”