Travis issues an impassioned plea to STOP THE MADNESS! 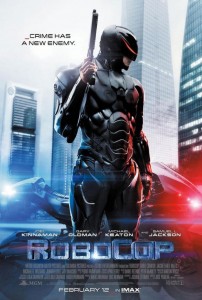 Europe had the black plague, Russia had cholera, Native America had small pox, and Hollywood has, well, the remake – with the death toll still skyrocketing for original scripts. But I guess what prompted this post was a trailer for Robocop, although it’s been festering for some time.

People often ask if I like to go to the movies, and they laugh when I say “I’ve already seen them.” But the joke is getting less funny and more accurate each year. Or maybe the joke is really on me. I mean, they can’t seriously want to remake films like Short Circuit and Drop Dead Fred, right? I don’t have anything against Johnny Five, but it’s not something that has stood the test of time.

And what about classics like The Seven Samurai, Time Bandits, and The Never Ending Story? Nobody can realistically expect to recapture that lightning in another bottle? Personally, I don’t think they even care. As an old salesmen once taught me, sell the sizzle not the steak. And nothing is more sizzling than a well made trailer and the controversy that comes from tampering with a masterpiece.

And while it’s no surprise that the gatekeepers of mass entertainment are businessmen, it is surprising how many now are solely investors vs actual people who, you know, care about films. But we let these frauds ride the coattails of legends all the way to the bank, and it’s not right.

I mostly blame my generation and the one after. See, we have never been forced to move beyond our childhoods. Everything we listened to, watched, or played growing up is still around. It only takes the pressing of a few keys and the click of a mouse to drudge it up.

Also, we have hundreds of cable networks dedicated to rerunning shows, so they never really go away – making nostalgia this foreign, even alien feeling because we have just as many, if not more, new memories of the same entertainment as we do old. So it’s no shock that nothing is sacred, anymore.

To sum it all up, the remake has gotten way out of hand. And unless society collapses, I honestly believe I will live to see the release of remakes of remakes of remakes. Stop the madness while you still can. Send a message to the studios like you did with Red Dawn, and maybe we could even experience nostalgia again, someday.

TONIGHT: NYE vs HAM – or – Evolution vs Creationism

From Dusk Till Dawn the TV Series