How do you get anyone to look at your book? When I was an in-house editor, I was very aware that it was difficult to get anyone to read a submission from a member of the public. The reality is that most editors are extremely busy and continually up against time pressure. 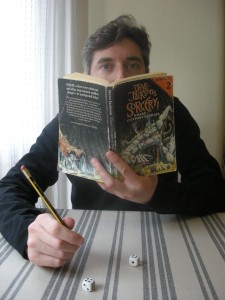 How do you get anyone to look at your book? When I was an in-house editor, I was very aware that it was difficult to get anyone to read a submission from a member of the public. The reality is that most editors are extremely busy and continually up against time pressure.

I had also seen manuscripts by people who were very talented but who never reached publication. In many cases, these people had fresher ideas than those of more successful authors. The problem was that the submission looked so amateurish and so much work would be needed to create a finished product that nobody wanted to take a risk on it.

In attempting to enter the world of fantasy publishing, I was also aware of a very big problem, which is that most manuscripts only get read because the author knows someone who knows someone. This is as true of agents as of publishers. No agent worth their salt is playing ping-pong at their desk and waiting for the phone to ring.

What I needed was an insider and this is where I contacted Gary Dalkin. He’s a freelance writer, editor and independent writing consultant who helps people develop manuscripts.

There is a misconception that exists which is that a self-published book is the same thing as a raw manuscript. In fact, many self-published authors have gone through an editorial process with someone like Gary to create a professional-standard novel.

Furthermore, an editor will know what publishers are looking for, and therefore, what agents are looking for too. A good editor can also be that contact with someone who works inside the publishing system. It can be the magic key.

Even once you’ve got an introduction to an agent, however, publication is not guaranteed. The agent may love your book but they have to sell it to a publisher. The essential question that the publisher will ask is “who is the customer for this book?” In essence, they need to compare your book to one that is already out on the market. They’re looking for the new J.K. Rowling or Terry Pratchett, but probably not the new you.

To would-be authors, that commercial approach is disheartening. You’ve written something original, but the publisher wants it to look like something else, something already popular. In my case, that was difficult to achieve because the genre of The Adventures of Siskin and Valderan is low fantasy, which is far from the biggest-selling genre on most publishers’ lists.

Publishers often won’t pick up a book because they are looking backwards, so you have to prove that your story or genre will sell. The only way anyone does that these days is to self-publish and then use the sales figures to bushwhack the suits in their distant board meetings.

That publisher accepted direct submissions. Unfortunately, many large companies won’t accept a submission unless it is represented by an agent. Obviously, an agent is looking to make a living from the authors they represent. Most authors in the UK make £600 a year. It’s hardly a surprise that an agent doesn’t want to take on a new client without some guarantee of wealth-earning potential.

Even so, pitfalls lie in wait for those who long to write the words ‘I’m agented’ on their website. You must be very careful with the contract you are signing when an agent shows interest in your work.

In the UK, agents will expect 15-20% of your earnings, plus VAT (value added tax). That money is payable on everything you earn: the advance, the royalties and (the big money spinner) the film and TV rights. In many cases, publishers even pay authors through their agents, so you never even touch the lump sum that your book has earned in royalties.

On the other hand, an agent may be able to negotiate a massive bonus on your behalf. If you have other income streams (like a job!), even that is not such a great achievement. Should your book sell well, you would earn that advance in eventual royalties anyway, without seeing one-fifth disappearing into the pockets of a middleman.

Next time: the dirty business of promotion.

The Play’s the Thing – the Importance of SF Staging

The time has finally come for me to attempt to review a series that I can find zero fault with, a series which is pure perfection. I touched upon it briefly, months ago, in my post “It’s Pretty – And Deadly: Horror Animanga.” But it’s finally time for a full review of Toei Animation’s Mononoke.

Forgive me, Janis Joplin, for destroying that wonderful album title of yours. But it is true: the urge to get up and go to a con is growing in me. Fortunately, I can do something about this, and so can many others who suffer from the same affliction. One of the recurring features in my […]

The Clubhouse; Fanzine Reviews: Some form of lunacy

We Went to the Moon Once