Home Science Exoplanets and the Steady Pace of Established Science

I was struck reading about the newly confirmed 715 planets originally identified as candidates by NASA’s Kepler mission.  This approximately doubles the number listed at sites like exoplanets.org.  I was finishing my PhD about twenty years ago when the first, 51 Peg b, was discovered (assuming we conveniently forget the inconvenient pulsar planets).

The initial breakthrough to find these sought after objects was difficult to predict.  The people doing the work were not the big, famous, important scientists at Harvard and Caltech — not then.  Although they became famous and important after the initial discoveries.  I remember watching one of them, Geoff Marcy, being interviewed on David Letterman, wearing a Hawaiian shirt we’d both purchased from the same little shop on the Big Island during trips to observe with the Keck Observatory.  I was working on quasars then, as I still do, and making steady progress on problems in my subfield.  Marcy and his collaborators were establishing an entire new subfield.  That’s cool, but hard to predict.  If every star system out there was more like our own, they would have spent many more years before finding anything, and perhaps failing to keep research positions without more to show for their effort.  As it is, pioneers in exoplanets may be in line for a Nobel Prize.

That’s how these things go.  Establishing a new field often means making a big breakthrough that was unexpected at the time, or at least unpredictable how long it might take.  Bet on it, and it’s a gamble.  Once the discovery happens, a lot of people flood the exciting new area, money is pumped in, and progress becomes predictable.  Proposals include increasingly good estimates of how many new exoplanets will be discovered and how fast.  Phenomenology is collected.  Empiricists start figuring out the patterns in the data.  Theorists start trying to explain them, and predict new ones to look for.

We’ve gone from zero exoplanets to well over 1000 in twenty years.  The same thing happened with quasars from the early 1960s to the early 1980s.  By 2000 we had cataloged over 10,000 quasars, and now we’re in the hundreds of thousands.  The real action has moved on from discovery into the middle phase of understanding the basics, which I think we’ve nearly got.  The future will be increasingly set on better understanding nagging details.  There may be some important discoveries left there, but my field is pretty well established.  We’ll make steady progress and continue to get at those details.

We’ll see something similar with exoplanets.  I can say with high confidence that we’ll find a lot more, and I can probably predict how many how fast to within orders of magnitude at least.  I now regularly see papers and talks about exoplanet properties and formation, and predictions about finding Earth-type worlds.  I have pretty high confidence we’ll find Earth analogs likely with life within a decade or two.  It’s pretty exciting.  Not quite exciting as quitting my field of quasars — because supermassive black holes are still really cool, too — but I’ll watch with great interest.  Call me an exoplanet fan. 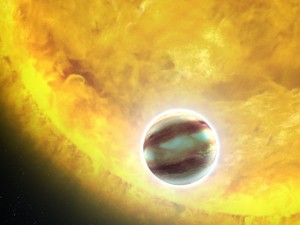