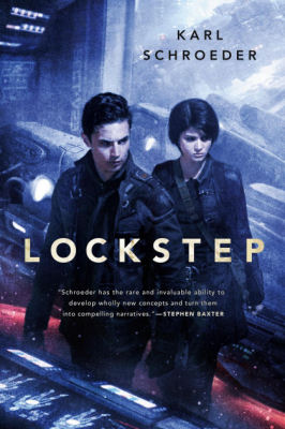 (Ed. Note: This review is based upon the uncorrected ARC; some material may change in the final version)

I must admit upfront to possibly having been waylaid by the marketing approach for this book.  The included promo sheet said: “…an incredible amount of detail in his (Schroeder’s) world building while at the same time providing the non-stop action that readers of Larry Niven’s Ringworld series are sure to enjoy.”

Yes, there is world building in rich detail.  Yes, there is non-stop action (punctuated by lots of sleeping, but in this case that’s not a bad thing), but, no, Larry Niven and Ringworld was not the example I would have invoked.

I’m flirting with falling off a review cliff into a discourse on why I’m a Larry Niven fan (particularly the stories that fall into his Known Space tales) and how and why Schroeder’s Lockstep is not in anyway similar to Niven’s style and, although I have no idea whether or not the invocation of that name was used in the sales pitch to TOR, I suspect that including it in the associated promotional materials was not Karl Schroeder’s doing in any way, shape or form.  So I’ll try to refrain, except for the following:

I’m susceptible to those kinds of pitches.  I grew up on 40, 50s, 60s, 70s science fiction.  It’s what I know and it’s what I like.  It’s what a prefer, to be honest about it.  I have a great deal of difficulty relating to the post 90s SF sensibilities (a self-acknowledged blind spot that, among other things, has me restricting myself to editor pro-tem status. I’m aware of the restrictive nature of my tastes and don’t intend to impose it on the fiction appearing here) such as lots of time spent on characterization, particularly the penchant for every character must have a flaw, the growing emphasis on the soft sciences, the increase in dystopian outlook.  So, when someone invokes the name of a fave – Heinlein, Clarke, Sturgeon, Farmer, Russell, Niven, Simak, etc., they usually get my dollar(s).  Satisfaction in those cases runs about 50/50 these days….

Schroeder has received a fair amount of praise for his Virga saga (with which I am unfamiliar), and he’s received praise from Niven himself for Sun of Suns, which, if the blurb on Amazon is anything to go by, sounds as if it somewhat resembles Niven’s own Integral Trees duology.

There are two things that Niven does (well three but his alien characterizations don’t really play into this) that appeal to me:  his world building is phenomenal and, he likes to wave lots of red herrings in his reader’s faces.  We follow him down a rabbit hole, grasping at clues like so many straws, come to the same flawed conclusions as his characters do and then he springs a new fact, a new viewpoint on us and we’ve got to re-evaluate the whole story all over again.  Even when you’ve finished a Niven tale, there are still unanswered questions.  (Message boards are filled with speculation on aspects of known space:  I even wrote my own take on one bit of Known Space history that may not be so known.)

In that regard, Lockstep disappointed.   There were mysteries presented, but no hidden alternative explanations waiting at the end.  (for example, we still don’t know who built the Ringworld, let alone why).

But let me back up and describe the premise of the book and an intriguing statement from the author’s website.

Lockstep concerns the adventures of Toby McGonigal and his family.  In brief:  human society on Earth and the inner planets has become split between the ultra rich and everyone else.  Toby’s family is marginally successful, but they are getting squeezed out by politics and economics.  Toby’s father chooses to gamble everything on staking a claim to a trans-Plutonian planetoid, Sedna.  By colonizing, the family (and co-colonizers) can stake a claim, achieve independence and make a better life for themselves.

Toby, being the oldest son, is sent on a mission to stake a claim to one of Sedna’s moons (necessary for legally supporting the claim to Sedna).  He experiences a ship malfunction, goes into suspended animation (expecting to die) and is awakened 14,000 years later.  Only to discover that his parents and siblings are still alive, that he has been turned into a legendary god figure and that he apparently possesses secrets that everyone in power – and those seeking power – want to get their hands on, some by any means available.  And then Toby learns that his brother and sister are trying to kill him.

Lockstep is currently being serialized in Analog and in announcing that fact, Mr. Schroeder has stated the following on his website:

In Lockstep I’ve reinvented Space Opera, and solved the greatest outstanding problem in Hard Science Fiction writing: how to have a Star Wars-type galactic empire of thousands of worlds and alien species, all available a short flight away, without violating any of the known laws of nature.

Which gives me the distinct feeling that Schroeder subscribes, at least somewhat, to the “Mundane SF” manifesto and the belief that FTL is “impossible”. Which saddens me a little since the possibility of FTL, while currently remote, remains plausible.  Maybe I’m just too old-fashioned to give up on the idea of warp drives and worm holes, Bloater drives, Mannschenn Drives, star gates.

Nevertheless, Karl Schroeder set himself a task and completed it.  Unfortunately, in order to look at how successful he may have been, we need to dip into spoiler territory so:

Warning:  the remainder of this review may contain reveals that you might not want to read. Yet.

Karl Schroeder’s solution to galactic empires that can function in all of the ways we expect them to, without an FTL drive, is to put everyone to sleep.  Literally.

Cold sleep technology is used to settle the solar system and Toby’s mother perfects the technology.  The colonists of Sedna use “wintering over” to allow their robots and automated machines the time to gather and process raw materials for the colony.  Everyone goes to sleep at the same time, allowing perhaps 360 years to elapse.  They then awaken, go about their normal lives for a year and then go back to sleep again for another 360.

This technique proves to be successful and is adopted by many other trans-solar colonies – all of which are dominated by McGonigal technology.  An economic empire is established by the McGonigals dependent upon their ‘Cicada beds’   Thousands of worlds wake and sleep on the same “lockstep” cycle so that they can remain in sync which allows for travel and trade.  (Go to sleep, your bed is loaded aboard a sub-light ship, it spends 360 years traveling, arrives at a new colony, you wake up, the colony wakes up, the three decades of travel are reduced to an effective one day.)

Toby’s younger brother and sister have come to control the empire.  To aid them in this they have created a mythology about the origins of Lockstepping and the members of their family, turning Toby (and his mom who went to sleep with instructions to be awakened when Toby returned) into mythic creatures of near god-like dimension.  The real Toby is a threat to the maintenance of those myths (that help keep the McGonigals in power) and thus the tension and the need for Toby to keep moving, staying one step ahead of his siblings as he tries to learn what happened during the past 14,000 years, which, among other things, reveals a mystery about his younger brother and their father.

The background Schroeder creates is a lush one:  bubble cities floating in the clouds of a gas giant planet; robots that self-assemble for different tasks; strange economies that, among other things involve robots hiring humans to work for them.

Unfortunately, the story itself, while a non-stop revelation of future wonder after future wonder felt flat; we are supposed to experience these new things as Toby does, with wonder and confusion, but all I was left with was the confusion.

About which I need to comment just a bit.  I was terribly bothered by what came across to me as a flawed system in dealing with the concept of Lockstep.  I never really got my head around the concept and found myself constantly asking questions about the whys and wherefores and the self-imposed limitations that had not been transcended over the course of 14 millennia:  alternate sleeper technologies exists, not as good as the McGonigal cicada beds, but its presence caused me to wonder why a group of rebels didn’t just kill all of the McGonigals while they were sleeping and then spend their own sweet time (while everyone else is sleeping) reverse-engineering the whole thing.

My confusion and inability to buy into the justifications offered by Schroeder may be due to my problem with the whole concept:  why go to such drastic and bizarre lengths to create a society that is so very, very vulnerable and largely unnecessary?  It’s explained that trans-plutonian planets are the only available real estate in the solar system and that it takes quite a long time to accumulate the resources and develop the infrastructure necessary to support a viable colony.  So what if it takes a few millennia to terraform a planet, just go to sleep and when you wake up…

Yet later on, the sleeper technology is used to colonize other solar systems, some of which apparently have Earth-like worlds orbiting them.  So a colony ship heads out, everyone sleeping in their McGonigal Cicada bed;  they arrive, set up shop and then…voluntarily maintain the lockstep system because it allows them to trade with other worlds.  I understand the reasoning:  what can you possibly ship from one world to another when so much time will intervene.  More than likely that whatever it is will be obsolete or unneeded when you get there.  But the real question is:  what can you possibly afford to ship over interstellar distances that’s going to be economically viable, period?  Food?  Cultural artifacts?  I think the only real answer is: information.  And information does not require spaceships, either FTL or sub-light.

Schroeder’s Lockstep universe certainly contains the technology necessary to transmit information over interstellar distances.  Any colonizing effort to a new solar system would have to depart predicated on the ability to become a self-sustaining colony.  Which means that it doesn’t need to trade in order to sustain itself.  And therefore has no inherent need to comply with the Lockstep system.  And I don’t think they would.

Bottomline is that I just can’t see the appeal or necessity of the one concept that threads through the entire novel.

For the rest?  Schroeder does skillfully weave several different narratives throughout the novel (one big reveal though came as no surprise to me as it had been well-foreshadowed earlier), creates some interesting characters and fills in the background with quite a bit of visionary thinking and interesting technology.  Unfortunately, I don’t think he has re-invented space opera, nor presented an appealing solution to the lack of faster than light travel.

In this week’s viewing: Cute High and Yatterman Night compete for the least surprising reveal, Death Parade literally shows its cards, and more!

Apparently, you CAN rely on the human race for something, and screwing things up would be that thing.