Home Fiction Living With the Nazis 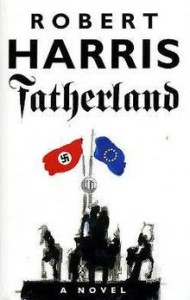 One of my favorite books of all time is Robert Harris’ Fatherland. Okay, I’ll come clean: Robert Harris is one of my favorite authors of all time. Fatherland was the book that turned him into a best-seller. It tells the story of Xavier March, a Berlin detective in the 1960s of an alternate history in which the Nazis won. Surrounded by enemies of le Carré-ian calibre, March risks his life to learn the truth about the concentration camps. He is, despite himself, a man of principle in a world where evil has triumphed, peaked out, and started to decay. With its haunting portrayal of the unthinkable, Fatherland massively boosted the profile of the sub-genre inaugurated in 1962 by Philip K. Dick’s alternate-history masterpiece, The Man in the High Castle. One might call this sub-genre “What if … the Nazis won?”

Twenty years after the publication of Fatherland, the sub-genre is still going strong. The newest entry is Dominion, by C.J. Sansom. 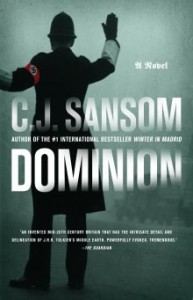 Sansom is one of those authors who makes me go into armchair-psychologist mode. He started his writing career with the hugely successful Matthew Shardlake series of Tudor-era crime novels. I have all of them. Mostly in hardback. These books are great (especially Sovereign; that one left me inarticulate with readerly joy). I don’t think he’s exactly abandoned the series, but he took time off a few years back to write Winter in Madrid, which was awful. Boring prose, one-dimensional characters, and scenes so heavily shod in research you could hear them coming from pages away, like Panzers. Winter in Madrid is about a spy vs. spy intrigue in neutral Madrid during the tensest months of World War II. The goodies are goodies, the Nazis are baddies, and that’s all. Gone are the moral nuances and subtle character insights of the Shardlake novels, the sense of living moral drama Sansom brings to his portrayal of the Tudor era (his Thomas Cromwell beats Hilary Mantel’s into a tall-crowned hat). It’s as if he got tired of moral ambiguity and went, “I want to write a novel where the goodies are good and the baddies are bad, dammit! What shall I write about? I know! NAZIS!”

And now he’s done it again! Dominion is a spy-versus-spy intrigue set in England in an imaginary 1952 in which the Nazis won. And they’re still bad. Enoch Powell is the Home Secretary and Mosley’s blackshirts have turned into a Special Branch with all the finesse of the Black & Tans, dog turds litter the streets and the Church of England supports the quisling regime run by Lord Beaverbrook, and now (not really a spoiler) they’re rounding up the Jews! The main character is a tormented civil servant involved with Winston Churchill’s underground resistance, a man without imagination or humor who lies to his wife, lusts after the Bond Girl who organizes his operations, and gets his colleagues in potentially fatal trouble. But he’s good. You just have to take that as fact. Because Nazis bad. QED.

There seems to be something about the Nazis that short-circuits the storytelling instinct in the brain of many authors. I’m picking on C.J. Sansom right now because I love his Tudor books and am annoyed by Dominion, but I’ve seen this over and over again. Is it a deeply embedded taboo? Or a moral conviction? Or received wisdom? Or a bit of all three? There must be some reason that hardly anyone seems able to write a “What if the Nazis won?” novel (let alone a straight historical World War II novel) from any other perspective than Nazis = evil. I’ve never attempted a story with Nazis in it myself, largely because I can’t quite see how to do it, either. Fatherland works because everyone in the story is living under the Nazi regime, so Harris could find shades of greater and lesser evil within that limited palette, and even some good. But what about a story like Dominion, which has both Nazis and people opposed to them? How do you do that without succumbing to tired clichés?

Clichés are clichés because they’re true, of course. The Nazis were one of the nastiest and most dangerous street gangs ever to seize political power. But they weren’t evil, because no one is, not wholly, not in this lifetime. Let’s put a finer point on that: Mobs may be wholly evil. Political parties, ideologies, yes. But individual human beings? No. That’s the paradox. What is evil in the aggregate is never so in its discrete elements. Human beings may commit horrendously evil acts (Wilkommen in Auschwitz!) but they still remain human. Which is, really, the horror of it.

Sansom makes his Gestapo agent a real person who, for instance, loves his son deeply. But his role in the story is still to represent eeeviiil. Even before we meet him, we know him from a thousand thousand books and films.

We have to find a better way of living with the Nazis, or our own present and future iniquities will fester comfortably under the radar, because [fill-in-the-blank politician] isn’t Hitler, y’see! If the Nazis were so very, very evil, we can feel smug about our goodness, even when we [lie to our wives / betray our friends / get associates killed / callously use our relatives for cover / ignore genocide and ethno-religious cleansing / toady to tyrants / look away, away, at our screens, our smartphones, our Kindles, anywhere else but at the abortion clinics and factory farms and homeless junkies in our very own neighborhoods] because we aren’t Nazis, after all!

We aren’t Nazis and we aren’t led by Hitlers, so we must be basically okay. Right? Right?

There’s another way of doing alternate history. Nothing equivalent to de-Nazification ever took place in Japan. You’ll hardly find anyone here willing to unequivocally denounce Japan’s record in World War II. It wasn’t a war of choice, you see. Japan was forced onto the offensive by the oil embargo. Well, maybe we did go a little too far in China, but all that fuss about Nanjing? Chinese propaganda. Why does everyone in the world take China’s side? Sniffle, sniffle. Oh, and the Tokyo war crimes tribunals? Totally victor’s justice.*

So there’s a disconnect between the way Japan sees its war record and the way pretty much everyone else sees it. Into this gap some interesting reinterpretations can creep. One example was that film I saw a few months back, Emperor. Another was Martin Cruz Smith’s historical thriller December 6. Meanwhile, in Japanese-language literature and film, the whole sorry saga is constantly being chewed over—with nary an eeeeviiil character to be found. Germany produces Der Untergang. Japan produces Battleship Yamato, the remake.

One lesson that stands out for me here is that it’s terribly hard for the winning side to speak truth about a conflict. I try (and fail) to bear that in mind all the time. Winning doesn’t mean you’re right, and even when you are right, that’s not necessarily why you won. “What if … the Nazis won?” books have the potential to teach us this lesson in the most pointed way. It’s a shame so many of them muff it.