The age old question: What makes a Geek a Geek? 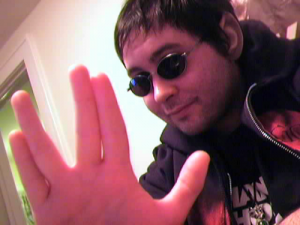 The emperor stands before an AT-AT, which rests on the TV stand above a David Tennant Years box set of Doctor Who, above Star Trek: TNG seasons. To my left is a life size replica of R2D2. To my right are book shelves, populated by the likes of Asimov, Card, Clarke, Herbert, Huxley, Lovecraft, Orwell, Martin, Tolkien, etc. But take a closer look, and you’ll find a contact juggling ball, a chain-mail bag filled with gaming dice, two sonic screwdriver replicas, Star Trek insignia badges, little dolls of Einstein and Tesla, an RC helicopter, and a homemade replica of one of Tom Baker’s giant scarves, acting as the cherry to this layer cake of dorkness.

Yesterday, it would have been obvious that this was the home of a geek. Today, it could be the home of anyone who grew up in the 80s, 90s, and 00s. But I’m not really writing about my thoughts on current cultural trends and Internet buzzwords. What I want to talk about are some of the little things that matter a lot, yet don’t exist anymore.

The biggest difference I’ve noticed between being a geek today and yesterday is the social implication. You see, we tend to be an obsessive lot—especially as kids. But back in the older days, you were forced to venture out of your cave and comfort zone or be forever alone. And this loneliness and boredom could overpower social anxieties and awkwardness from time to time. It was tough; we were bullied, beaten, and embarrassed away from certain social circles. But ultimately, we were guided toward each other. All the crap I went through only led me to be tougher and find my real friends, people I actually shared interests and philosophies with, who were a part of my physical reality.

And the arcade was where we went to test our mettle against strangers in Street Fighter. You made real friends over the things you liked, in this case video games, because you had to make an actual effort to engage others in them. Today, that’s largely gone as it only takes a modicum of interest to acquire a game and play it against people you’ve never met before from the comfort of your living room. This is what the average person wanted, and this is why arcades have closed all over North America.

When it comes to toys for grownups, no not those kind of toys, sicko, there are websites like Perpetual Kid and ThinkGeek which offer a never ending supply of junk we all wanted growing up that never existed in the dark ages—where only the most hardcore or craftiest of fans would make their own fictiona.

But, it turns out, it wasn’t just the geeks’ inner children screaming for a light saber replica or the fedora from Indiana Jones. When given the option, all sorts of people will come out of the woodwork to bring a slice of their favorite film into their world.

I bring this up because I’m even guilty of posing as more of a fan than I am. I do like Star Wars, but I’ve grown disenchanted with it after many mediocre books, movies, shows, and just constant reruns. I wear, occasionally, a shirt that says Han Shot First. I got it not because I really care, but I thought that Lucas edit was hilariously bad, and I found the shirt funny.

Well, one day I met a pretty hardcore fan while wearing said shirt. Weirdly, he was a biker who once had his arm signed by the actor who played Chewbacca and decided to get it permanently inked. Having possessed that same article of clothing, he was compelled to show me his tattoo. I felt like a fraud. I could sense his enthusiasm and wished I could share it. But I understood in the olden days of fandom, an interaction like that would have been grounds to start an actual friendship. This has also happened with other shirts. Most notably my Atari one sparked an awkward conversation where I recanted my days of playing the 2600, at a friend’s home, because we were really bored and didn’t feel like playing the Nintendo games we had.

Today, our stuff is just stuff. It’s so easy to obtain, that it doesn’t reflect much on our passions. And some, by some I mean most, of my geek purchases were impulse buys on a night I drank way too much. So what differentiates a geek from just a normal person who grew up with all the same entertainment? The answer is becoming muddier with every passing year as the crowds at various cons grow bigger, video game sales skyrocket, and comic book films continue to take over an industry.

“I can truthfully say that I have learned more about Time, Space, Motion, Astronomy, Fourth Dimension, and the countless other mysteries of the Universe while reading magazines of science fiction than through any other means that I know of”