Gaia will be able to estimate wobbles in the position of stars, which would signal the existence of planets in orbit around them. Gaia will also be able to view new asteroids and give more accurate data of their orbits. 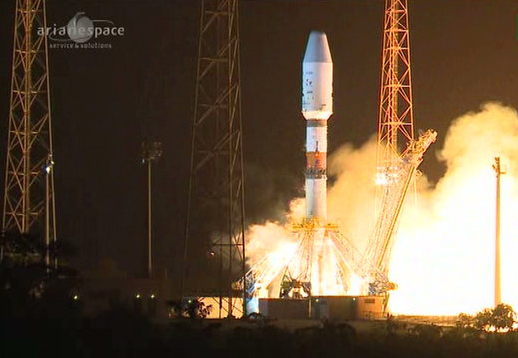 On December 19, 2013, in French Guiana, the European Space Agency (ESA) launched its own “mapping app” aboard a Russian Soyuz rocket (nowadays, everything’s an “app”). The “app” is a two-ton observatory called Gaia that is equipped with the largest digital camera ever launched into space and an imaging system that includes a billion-pixel camera (try getting that on e-bay) and two telescopes. Its mission? Chart the changing position of a billion stars in the Milky Way Galaxy to find out their history, their composition…and their future.

As you’re reading this, Gaia is rocketing toward an orbit around a gravitationally-stable virtual point in space called L2, about 1.5 million kilometres beyond Earth. Over the next five years, Gaia will study the stars in our galaxy by observing them an average of 70 times in order to measure their properties and position changes in the sky.

“Gaia promises to build on the legacy of ESA’s first star-mapping mission, Hipparcos, launched in 1989, to reveal the history of the galaxy in which we live,” says Jean-Jacques Dordain, ESA’s Director General. 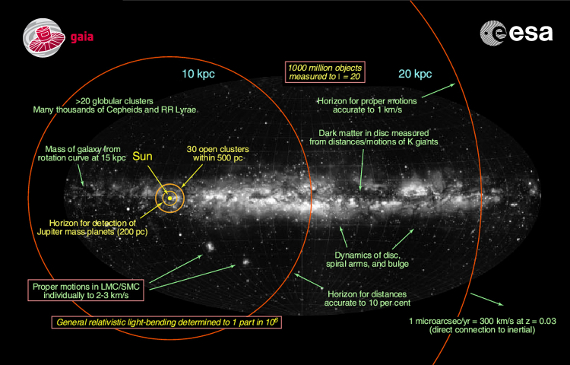 Like the cassette tapes of old, the stars’ movements can be rewound to discover what events occurred to form the Milky Way…whether gas clouds and star clusters merged, or whether a huge chunk of gas and dust began to condense.

“Along with tens of thousands of other celestial and planetary objects,” said ESA’s Gaia project scientist Timo Prusti, ”this vast treasure trove will give us a new view of our cosmic neighborhood and its history, allowing us to explore the fundamental properties of our Solar System and the Milky Way, and our place in the wider Universe.”

By analyzing and comparing its collective data, Gaia will be able to estimate wobbles in the position of stars, which would signal the existence of planets in orbit around them. Gaia will also be able to view new asteroids and give more accurate data of their orbits. 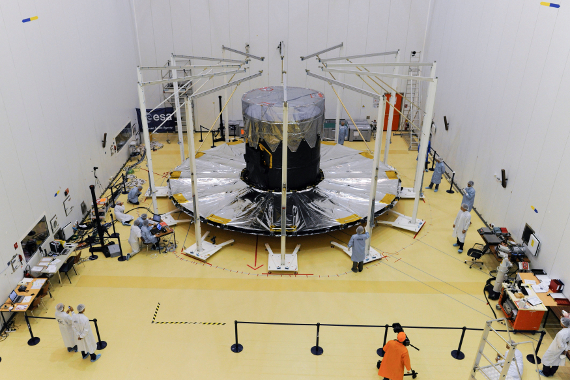 After five years, the data collected will exceed 1 Petabyte or 1 million Gigabytes, equal to about 200, 000 DVDs. The Gaia Data Processing and Analysis Consortium, comprising more than 400 individuals from various scientific institutes across Europe, will be responsible for compiling and analyzing the data…a scientist’s dream.

So if you’re traveling in a spaceship one day and have to ask Siri how far it is to the next star system, she may access the Gaia database in order to inform you that you’ll have to remain in cryogenics for the next 4 billion years. Don’t forget the freezer wrap!

ESA is an intergovernmental organisation, created in 1975, with the mission to shape the development of Europe’s space capability and ensure that investment in space delivers benefits to the citizens of Europe and the world.

Speaking of plants…or, in this case, fungi

Captured unknowingly by scientific instruments for years, a sky phenomenon is finally brought to the attention of researchers by eagle-eyed citizen scientists. To professional, but silly, scientists. Source: How Did We Miss This? An Upper Atmospheric Discovery Named STEVE – Eos