Fear and loathing in a dark future with Spider Jerusalem, the Hunter S. Thompson of the fictional future.

In 1996, DC Comics launched its Helix imprint.  The goal of Helix was to publish science fiction comics  that would appeal to the same readership that made DC’s Vertigo imprint successful.

The Helix imprint only lasted two years. One of its titles, however, was transferred to the Vertigo imprint, where it lived a good life of over 60 issues, and gathered both a strong audience and critical support.  And thanks to the miracle of paperback collections, the complete series is still in print and relatively easy to find. 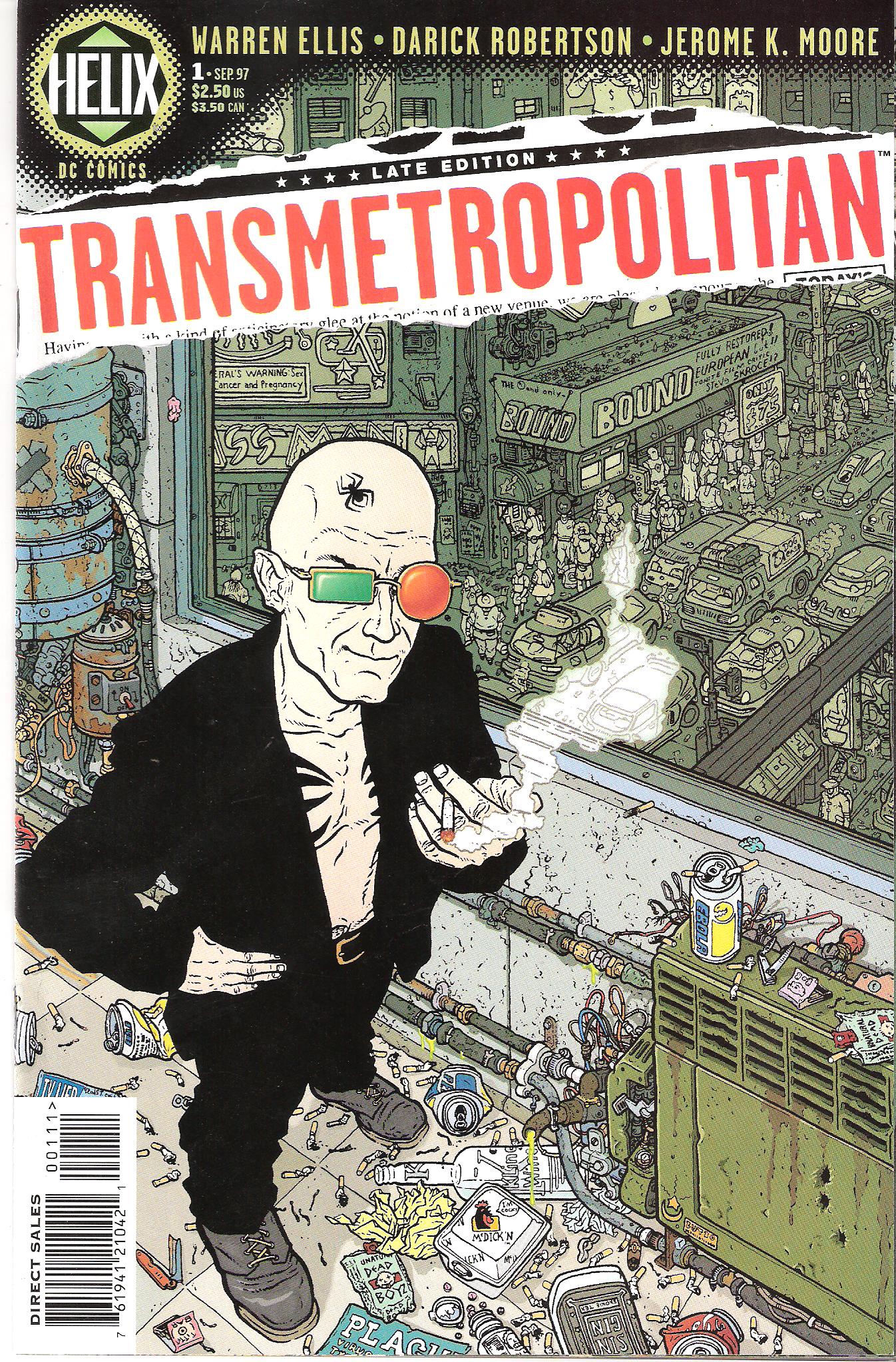 The series in question is Transmetropolitan, written by Warren Ellis, with art by Darick Robertson.  It was published before Hugo award for Best Graphic Story was established, which is a shame, because I think it would have won easily.

The protagonist in Transmetropolitan is Spider Jerusalem, a famous writer and journalist in a future era (The exact date is never given.) Before the story opens, he flees the chaos of The City, hoping to discover a more peaceful life. What he discovers is that he can’t write away from an urban environment. In Transmetropolitan, Jerusalem resumes his love/hate relationship with The City, and with journalism.

In a later issue, when one of his assistants accuses him of being paranoid, Spider replies simply, “Paranoids are just people with all the facts.”

As for The City itself, at first it doesn’t seem much different than the city in Blade Runner, but it rapidly becomes something more complicated and more unique, a collection of enclaves filled with everyone from cannibals and talking dogs to worshipers of Woden and people who are voluntarily transforming themselves into extraterrestrials. Ultimately, it seemed to be influenced more by Philip Jose Farmer’s Riverworld or Jack Vance’s Big Planet than Blade Runner.

Ellis has written some of the best, genuine science fiction that has appeared in comic book form in recent years.  His other series include Ministry Of Space; Anna Mercury ; Doktor Sleepless  and FreakAngels.

Robertson provided the art for nearly all—if not all—of the regular issues,  displaying a flare for both people and exotic environments. He’s  currently illustrating Ballistic, a book he co-created,  which I’ll  be talking more about here, sooner rather than later.

Along with  the 60 regular issues, there were two specials called I Hate It Here and Filth of the City.  These specials featured illustrations from dozens of different artists, accompanied by excerpts from Spider’s columns. It was a clever combination of art portfolio and the pseudo documentation that sometimes appears in sf stories.

Transmetropolitan was popular enough that Spider Jerusalem was included in a line of limited edition action figures (I’ve got mine on the shelves behind my desk)  and there was brief talk of a  movie.  The series was reprinted in a run of 10 paperbacks, which are still available.

Beat the Christmas Frenzy and Find Your Focus

In this week’s viewing: Land of the Lustrous takes another strange turn, Guru-Guru notices a new season has started, and more!

The Brothers Jetstream: Leviathan by Zig Zag Claybourne is a book that never sits still. Just when you think you’ve got things figured out, the next move will leave you shaking your head.