Samantha cries and gets scared while watching the latest in the Hunger Games’ franchise of film – Catching Fire. 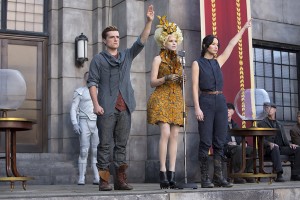 I went to see The Hunger Games: Catching Fire at the weekend. For me this book was the hardest to read, because it was so gripping. From the whipping, people being killed for showing their support and the horrific fog, waves, monkeys, etc in the games. We forget that these are children, not adults that are going through all of this. The film did the book justice, a lot better than the first. I loved the books and when I saw the first film I was seriously disappointed. It was mainly the relationship between Katniss and Peeta. In the book I felt it cam across more that she liked him as a friend, nothing more but felt pressured to play-up her feelings only to start to grow confused of her feelings.

The second film does showcase her confusion between the two men in her life. And actually does a better job than the books to make you be on the fence as to who she should be with. I was always routing for Gale, but after watching Catching Fire I could be team Peeta. These books and films are so gripping, but they also leave you feeling quite emotional. I can’t remember the last film that made me cry and also feel scared in the same sitting. I’m glad I walked out of the cinema into a busy festive shopping centre to bring me back to reality and away from a world where children are put into a game to fight for their life.

Like the book, the film ends on a cliffhanger and we now have to wait till next year to find out what happens next. But not for the full story. In recent book adaptation tradition, we will have two films for the last book, both a year apart.

A look at each week’s episodes by two opposing critics, presented in a conversational style