Home Fandom REVIEW: GALLOWWALKERS (2012) Not Worth Hanging Around For 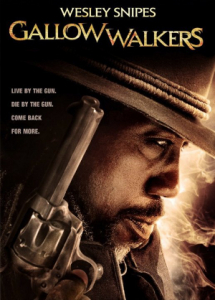 In this modern age of DVRs, DVDs and Blurays, a movie has to be pretty darned bad for me not to watch the whole thing. Even the most terrible of movies can be watched by skipping forward repeatedly, just to get snippets of what is happening and see it to the end. But Gallowwakers, starring Wesley Snipes, is a movie so bad, I couldn’t bear to even watch it in Fast Forward.

Before going any further, I’d like to point out I like Wesley Snipes. I’ve enjoyed every movie he’s ever been in, particularly his Blade trilogy. So when I saw previews for what looked to be a cowboy hunting vampires in the Old West, I was hooked. I had to see this film. Getting the chance to took me awhile–I had to find a night the kids turned in early and left me all alone. I set out some snacks and a drink, kicked out the footrest on the recliner and… was thoroughly dissapointed.

Now, this is nothing against Mr. Snipes. The brief twenty or so minutes I was able to bear of this awful movie, he was just fine. A believeable action star bringing the same intensity and badassedness to the screen he always does (although Demolition Man is by far his best acting job in my humble action-loving opinion). What irked me about Gallowwalkers was plenty though.

First, its not much in the action department. Several minutes passed before anything more exciting than a panoramic establishing shot happened. In fact, the first ten minutes of the movie is all about establishing shots and trying to get through to the viewer the isolation and remoteness of the desert, how lifeless it is. Which, I guess makes a kind of sense since this movie is about vampires. Or is it zombies? To be honest, even after reading the wikipedia summary on this stinker, I’m still a bit confused.

Secondly, when the villains do make an appearance, they get outvillained. Villains #1 are some kind of strange, bleached blonde types that could easily be mistaken for fans of George R.R. Martin’s Games of Thrones’ character Daenerys Targaryen. I still don’t get that. Yes, the desert bleaches bones and what not, but not everyone is going to have their hair turn white in the desert.

Anyways, the blondies are set upon by some skinless guy. It’s a great practical effect, all his muscles and veins and stuff showing. But then he skins a blondie and wears them like a suit, covering up all that fantastic makeup. WTH? Why tease me with such awesomeness, only to cover it right up?

Then there was the strange sheriff (who didn’t have white hair) who works with, or for, or maybe over the blondies. He is portrayed as some super evil badass who’s rounding up sinners to sacrifice in the middle of nowehere… and skinner guy cuts him down less than five minutes after he makes his screen appearance. Again, color me confused.

Frankly, I’m amazed I lasted as long as I did with this one.

If I have to say something nice, I will point out this is a very well-made movie. I particularly liked how it just looked and felt like a classic Clint Eastwood Spaghetti Western. And the effects, what few I saw, seemed top notch. It was just boring as hell.

All in all, I have to give this one two angry thumbs down. I rented this movie, and had high hopes. Especially after fastforwarding through some stinker on Netflix about a janitor that gets stuck in the crapper when the zombie apocalypse starts.

In the end, I got on line, read the wiki summary and confirmed my opinion that this movie wasn’t for me. Mr. Snipes, you can do better. In fact, I recommend hiring the guy who made the trailers for Gallowwalkers to direct your next movie. The trailers were awesome!