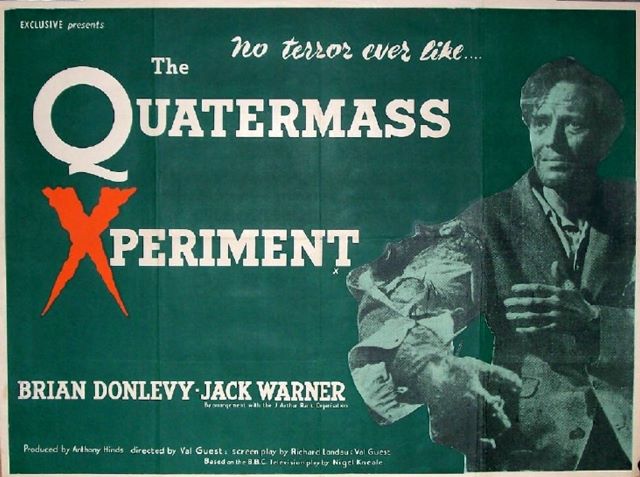 Recently the BBC showed very good high definition transfers of the first two Quatermass films. Not having seen the first since I was a teenager, and somehow never having seen the sequel, this was a good opportunity to discover how these early British science fiction films hold up 50 years later. In this post I’ll look at The Quatermass Xperiment, and next week consider the follow-up, Quatermass II.

Until the beginning of the 1950s, science fiction films were very much a rarity, but then for whatever reason—the Cold War is usually cited—the genre took off with the arrival of The Day the Earth Stood Still and The Thing (From Another World). In the UK, SF films were almost non-existent. Meanwhile television was still in its infancy, having launched in 1936 but gone on hiatus with the start of WWII in 1939. Transmissions resumed on 7 June 1946, but television sets were expensive and audiences numbered in the hundreds. TV didn’t really begin to catch on in the UK until the coronation of Queen Elizabeth II in June 1953. It was the nation’s first television ‘event’ and suddenly every family that could afford one was buying a television.

There was only one channel, but it had broadcast adaptations of R.U.R. and The Time Machine, and children’s serials such as Stranger from Space (1951–1952). The Quatermass Experiment, written by Nigel Kneale and transmitted in 6 half-hour episodes (18 July – 22 August 1953) just weeks after the coronation, was the first original adult SF drama ever made for UK TV. It was an enormous success, helped greatly by all those new viewers with their new TV sets.

Such was the popularity of the first adventure of Professor Bernard Quatermass that it led to three sequel series, all written by Nigel Neale. The first three of these were each in turn made into successful movies by Hammer Films. 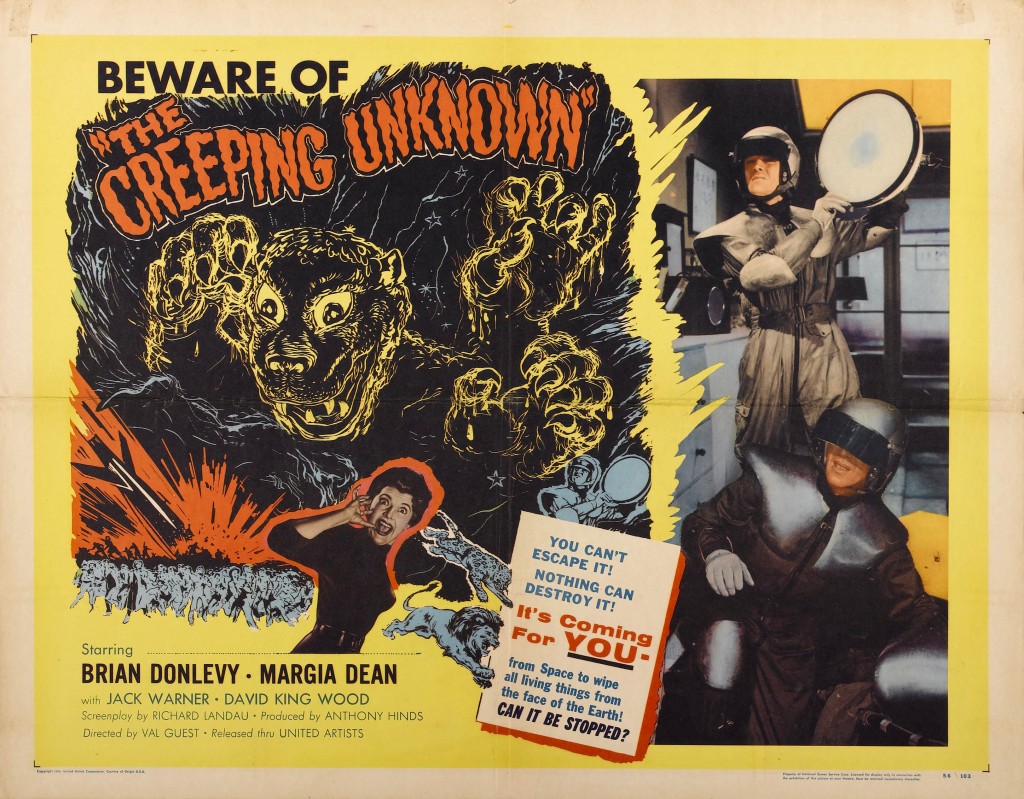 The Quatermass Xperiment (1955) (in the UK the name was changed from the TV title to play up the X-rated, horrific nature of the film, while in the US it was released as The Creeping Unknown, the TV series itself being unknown) condensed the 180 minutes of the serial into a swift 82 minutes of cinema time. Reginald Tate had played Quatermass, head of the British Experimental Rocket Group, in the TV serial. To help sell the film in the US, the film replaced him with the Irish-born Hollywood star Brian Donlevy. US actress Margia Dean played an important supporting role, and the American poster gave her second billing.

Nigel Kneale was unhappy with certain script changes made by director Val Guest, who adapted his story with Richard Landau, notably changing the original, more thoughtful climax of the story with pure low budget action. Kneale was also unhappy with Donlevy’s interpretation of the professor, who in contrast to Kneale’s highly moral figure, comes across as self-serving, inconsiderate of others, and ruthlessly pragmatic in pursuing his own goals.

Having been out of contact for several days, a British spaceship with a three man crew returns to Earth and crash lands in field. The doors have not been opened since take off, but two of the crew are missing. The remaining astronaut, Victor Carroon (played by the a very gaunt Richard Wordsworth) is highly traumatized and can barely communicate with his rescuers. As is the way in such SF horrors, Carroon begins to mutate into an alien “something,” his body incorporating elements of a cactus from the hospital where he was taken for treatment. In what is virtually a silent performance, Wordsworth brilliantly captures the agonies and internal struggle of the man. He is the best thing about the film.

There are chilling set-pieces in a zoo, a chemist’s shop, and on the banks of the Thames—a sequence with Carroon and a little girl playing with her doll evokes memories of a scene famously cut from the Karloff Frankenstein for being too shocking. Rather than a US-style monster rampage, this alien invader is a menace somewhere between Invasion of the Body Snatchers and Carpenter’s The Thing—it absorbs other life forms and replicates rapidly—and by the film’s climax it is a threat to all life on earth. An early example of body horror, The Quatermas Xperiment was gruesome for its time, though today would warrant no more than a PG rating—similar horrors can be seen on Doctor Who.

Location filming shows the streets of a very different England to that of 2013 and it is interesting to see a much less slick, provincial, gentle approach to life set alongside the horrors. The blunt, hard-edged Quatermass effectively bounces off the easy-going London Police Inspector Lomax, played by Jack Warner—forever remembered with affection in the UK as the kindly television policeman, Dixon of Dock Green. He is described as a simple, Bible-reading man, though nothing is made of this despite the fact that the climax of the film finds the scientist anti-hero in conflict with the alien menace he is responsible for unleashing in the middle of Westminster Abbey. If the script ever contrasted faith and science, such elements failed to make the final cut. Quatermass himself is not affected by his own adventure, though it takes the world to the brink of destruction—he sets off in the final scene to launch his next rocket. He seems a direct corollary to the cold technocrats firing their moon gun in the finale of Things to Come (1936).

The Quatermass Xperiment remains a gripping and entertaining film. Val Guest’s direction is brisk and efficient. The cinematography is largely functional, but contains some beautifully composed and lit 4:3 images. There are certainly dull moments, especially in the opening, which contains rather too many shots of fire engines, and The Quatermass Xperiment won’t actually scare anyone today. But the film remains a terse and involving example of what early British SF cinema looked like. The sequel is actually much more ambitious and interesting. Come back next week to see what I thought of it.

Read about the sequel, Quatermass II