He also created and wrote The Ivory Tower for RTE Radio 1, which ran to over one hundred half-hour episodes. His novels based on this series, The Johnny Coffin Diaries and Johnny Coffin School-Dazed are both published by The O’Brien Press and have been translated into Italian and Serbian.

Under the ironic Pseudonym of Sex W. Johnston he has recorded an album with legendary Stranglers frontma, Hugh Cornwell, entitled Sons of Shiva, which has been released on Track Records.

He is a past nominee for The Hennessy Literary Award and his poem The Green Owl won the Listowel Poetry Prize 2007. In 2007 he was awarded a Patrick and Katherine Kavanagh Fellowship in Poetry.”

I’ve read Irish poet John Sexton’s work often online and in Star*Line, so when I read that he had published a (new) collection I asked if I could get one for review purposes. His Publisher very graciously sent me a copy from Ireland (remember that I’m in France, so it’s not such a stretch). I’m so glad I got to read this collection in the dead-tree edition. It’s a beautiful little volume of 57 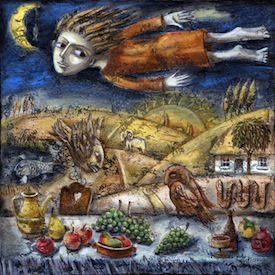 mostly short length poems. The cover art by Ludmila Korol, called “Moon Wind” is stunningly perfect and beautiful on the paperback cover. The original is oil on canvas and is certainly even more vibrant in that medium. The volume is a perfect bound paperback printed on smooth cream-colored paper which is very easy on the eyes and a pleasure to hold in your hand. However, if you are in a part of the world that make procuring a hard copy of this collection difficult it is available on Amazon. Sexton has published widely online and in print and I’ve always enjoyed his work. He has written many Haiku sequences and hybrid forms, which are wonderfully evocative. Offspring of the Moon contains many poems which were originally published in print journals and anthologies and they defy categorization. Wikipedia states that his poetry falls mostly within the realms of Magical Realism, Fantasy and Science Fiction, but I would venture to say none of these here are science fictional in the strictest sense, nor are they pure fantasy. Magical Realism comes closer, but they are like nothing else I’ve ever read before. Sexton has a very original voice. Nevertheless, I was drawn in by the vividness of the imagery and found a kinship with the weird. I think that describes them best. They are simply weird, not in the lovecraftian sense, mind you, but strange and delightful in their flights of fancy, combinations of metaphor or analogy which struck me as something quite fresh. Here are a few examples:

rubs the carpet with his toe, and cat

patterns raise themselves from the pile.

The lens of the sky

Beyond the Acorn door I found

A man made of sunlight awoke on the edge

of the road. He was stretched for seven miles

I wait on the step catching light on my tongue

–“Waiting Patiently at the Stone Door”

the hedges blurred like the sea in a shell

–“A House of Golden Thread”

That grey cat sleeps in the dusty spaces

of the moon’s face…

She is the starlight’s whim

and may be glimpsed as troubled waves through grass

I’m so grateful that I got the opportunity to read this collection and to dig deeper into it through this review. It was so worth it. It’s like a revelation with each reading.

Below are several audio recordings (by me) of poems from the collection:

“Sunlight” – A little like a riddle. If it weren’t for the title it might be a guessing game: Who am I?

“She Combed Through the Night” – The traditional rhyme scheme and meter make this a lovely enigmatic poem (i.e. I don’t know what it means really!) about the lure of the night sky.

“The Early Risers” – This is probably my favorite poem in the collection. And it’s a Petrarchan Sonnet! Rhyme scheme: abba abba cdecde. I love the image of the laundry rails causing lift-off of the whole house, the neighboring house and everything around them powered by the breath of six giant hedgehogs.

“Medusa” – What does Medusa’s hair do when it’s not turning hapless sailors to stone?!?

“The City of Angels” – The traditional meter and rhyme scheme (xaxa, xbxb, xcxc) belie the gruesome and loathsome narrative of this story.

If you enjoyed those, or prefer to read your poetry (you don’t know what you’re missing, I expect!) you can read some more recent examples of Sexton’s poetry online:

“All That Her Mother Left Her” at Strange Horizons

“Invisible Sister” and “A Portrait of the Artist as the Second Vatican Council” at Southword, New Writing from Ireland

“A Portable Philosophy and History Kit” and “Is That It Then?” at Burning Bush 2

That’s it from me! My posts will be appearing on Wednesdays from now on, so expect me Wednesday in 15 days! In the meantime, all those who celebrate Christmas – have a joyous one! Those who don’t – enjoy the day off!