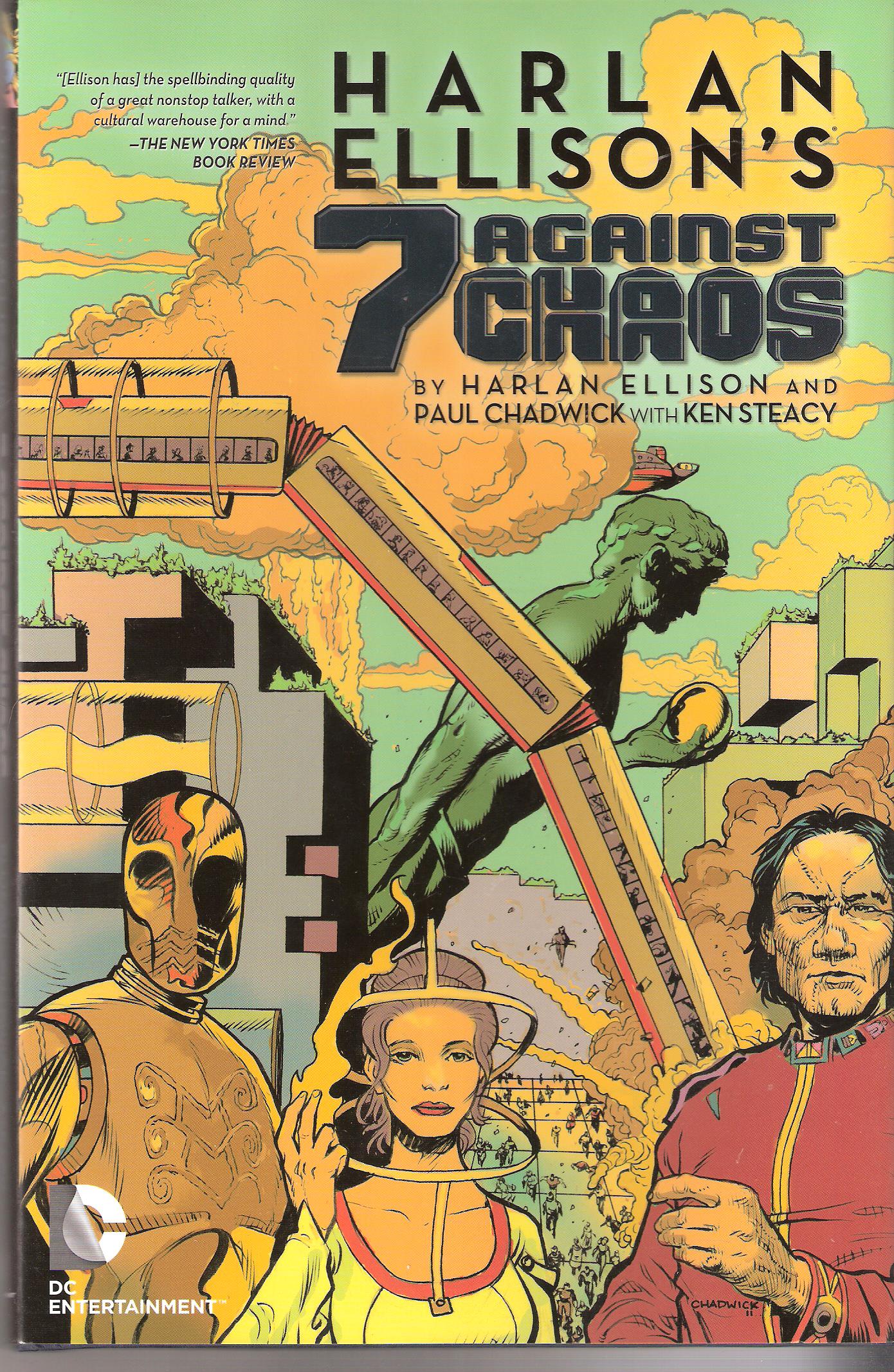 Like many science fiction writers, Harlan Ellison has a long-term relationship with comics, both as a fan and a creator.

In addition to consulting on adaptations of his prose stories, he has created original stories for comics. In the early 1970s. for example, Ellison plotted a story for Marvel Comics that introduced Jarella, an alien woman who played a significant role in the Hulk’s life for several  years.

His most recent comic project was 7 Against Chaos, a graphic novel published recently by DC Comics. Ellison produced the full script, while Paul Chadwick and Ken Steacy provided the art. If you’re looking for a story that stretches the boundaries of comics or science fiction, this isn’t it. But it is a solidly entertaining outing.

7 Against Chaos is set in a 22nd century when the solar system has been colonized by the Reordered, genetically engineered human beings. A mysterious robed figure is recruiting individuals from these various worlds, in order to fight a menace that’s eating away at the fabric of space and time.  The robed figure is being guided by the Crisis Computers, artificial intelligences that are essentially reordering themselves. The Crisis Computers serve humanity, but they’ve been building their own replacements and upgrades for so long now, humans no longer understand how they work.

Ellison has been telling interviewers that he wanted to write swashbuckler, a Dumas story set in space. That’s a reasonable comparison but it also reminds me of some of the best stories that ran in Planet Stories magazine, back in the 1950s.

Ultimately, the team has to travel back through time, millions of years into the past, in order to confront the mastermind behind the danger. (A quick tangent: I’ve read more than one article recently that talks about the lack of stories about space exploration in recent SF. Here’s a story that starts on other planets, then goes back to Earth, while treating it as a strange new world.)

Gathering a group of misfits who must learn to act as a team has a long and honorable tradition, both in sf and adventure fiction in general. This particular group of seven can be directly connected to The Seven Samurai; The Magnificent Seven and the movie Battle Beyond the Stars, among other stories. Ellison does a great job making all these characters strongly delineated and appealing. The artists make them visually different, without resorting to super-hero style costumes.

The villain’s master plan will have a familiar ring to some science fiction fans. And the threat’s he throws at our heroes sometimes seem more comical than threatening. However, Ellison adds a steady stream of little details that will hold the reader’s attention. Along with the Crisis Computers, there’s Urr, the robot that learns to tell jokes and an unexpected tribute to a DC comic from the early 1960s. In addition, the very ending of 7 Against Chaos came as a surprise.

Paul Chadwick is the creator of the cult-favorite character Concrete, while Ken Steacy has drawn sf comic series like The Sacred and the Profane and Tempus Fugitive. What’s striking here, I think, is how restrained their artwork is. Scenes other artists would give a full-page splash panel get much less here, and most of the panels are modestly-sized rectangles (although that changes somewhat as the end approaches). I’m not saying this was a bad choice, but it does give the book an oddly nostalgic feel. ( For what it’s worth, another  recent comic project of Ellison’s has the same retro layout. It was an adaptation of Phoenix Without Ashes, the original pilot script for the notorious Starlost TV series.)

If you like Ellison’s prose fiction, you’ll probably want to check out this graphic novel, where he just sits back and has fun.