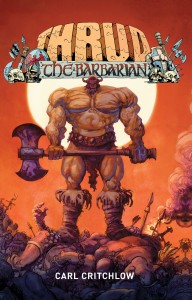 Carl Critchlow has been an artist and author on the SF and fantasy scenes for almost thirty years, during which his work has appeared in DC Comics as well as 2000AD. He has also been an artist on the card game Magic: The Gathering, and for RPGs such as the Star Wars role-playing game and the Dungeons and Dragons Monster Manuals. He is most famous for his legendary character, Thrud the Barbarian.

Thrud first barged his way into the public view in one-page strips in the British RPG magazine White Dwarf during its glory days in the 1980s. Today, Thrud returns in a new collection from Titan Comics. We sought out Carl to get his take on the character.

Alastair Savage for Amazing Stories: Carl, you first created Thrud when you were a student of Bryan Talbot’s at art college. Bryan Talbot’s name also popped when I was speaking to Pat Mills about Glenn Fabry. Were you and Glenn ever in the same class? Have any of your other old classmates gone on to greater things?

Carl Critchlow:  Although Bryan introduced Glenn to Pat, Glenn was never actually a student of his at college. As far as I know, Glenn showed his portfolio to Bryan at a convention and Bryan was impressed (and helpful) enough to try and get him some work. Not long after I was a student, Bryan was able to leave teaching all together (it was a foundation course where you tried a bit of everything before choosing a subject for a degree) so I think I’m the only one of Bryan’s students to end up working in comics, but a couple of years earlier (before Bryan’s time, too) Nick Park [creator of Wallace and Gromit] attended the same course.

ASM: Historically, Thrud’s adventures feature in a one-page strip, a bit like a short story or an extended colored Sunday comic. You then wrote a series of longer comics, all of which appear in this new collection. Did you ever wish that more of the character’s adventures were longer, like Sergio Aragonés’ Groo the Wanderer?

CC: I think the single page format did become rather a limitation and I would’ve liked to try some longer strips—but back then I think I might have struggled to produce a full comic’s worth.

ASM: In the beginning, Thrud was a black and white inked strip. You’ve now moved on to using colored art drawn on a computer. Why did you make the change?

CC: The original Thrud strips were black and white because all the interior pages of White Dwarf (and many other magazines and comics) were black and white in the pre-digital printing days of the 1980’s. After working for Games Workshop, I started getting work from 2000AD and DC producing fully painted comic strip work—which everyone wanted at the time on the back of Simon Bisley‘s popularity—and went from there to penciling the regular Lobo monthly for DC. I was never really happy with having no real control over the finished artwork while working as a penciler, so decided it was time to develop my own style. I’d just got my first computer and was experimenting with coloring in Photoshop and was also still getting asked about Thrud if I attended any conventions or signings, so decided to bring the two together as a showcase for my new way of working as much as anything else—but the artwork is always drawn traditionally (usually with a dip pen) in ink and then scanned in and colored on the computer rather than being drawn using one.

ASM: You wrote and illustrated Thrud’s adventures, but latterly you’ve been drawing other people’s strips for 2000AD and DC Comics, mostly famously Lobster Random. Do you ever want to take over the writing reins again?

CC:  The best thing about writing your own stuff is you can choose what you want to draw—I’ve got a few ideas that I’ve had at the back of my mind for years but I’m not sure I’d be able to do them justice myself and as I don’t actually enjoy the process of writing I’d rather concentrate on the drawing for the time being (apart from Thrud that is!).

ASM: Thrud first reached a wide audience in the pages of White Dwarf. Back in the eighties, White Dwarf was a British magazine for all role-playing games. Were you a gamer yourself? Did that inspire the strip in any way?

CC: I’m afraid to say despite working in the games industry for many years now I’ve never been a gamer myself—doing what I do for a living, I spend little enough time in the real world as it is!  When I was working for Games Workshop I was aware of the stuff they were bringing out and tried to get a few references into the strips whenever I could, but that was as far as my involvement went. As for games design I have to admit I wouldn’t know where to start.

ASM: By far your biggest work in the gaming world has been on Magic: The Gathering. You’ve produced over two hundred images for the card game. What’s it like creating these cards? How much input do you get in the creation process?

CC:  Working on Magic: The Gathering has always been great fun, but as the Magic universe has evolved over the years, there’s a little less room for personal input than in some of the earlier sets.

ASM: Do you have a favourite image from your work on Magic: the Gathering?

CC: I have a few I’m reasonably pleased with but I think my favourite image is ‘Clockwork Beast‘  from the Beatdown box set.

ASM: Finally, we have a lot of readers who are interested in self-publishing, something that you have done successfully with Thrud. What advice would you give to comics creators who are thinking of going down this route?

CC:  It’s pretty easy to self publish in one form or another, but the trick is getting your stuff noticed and distributed once it’s done. My advice to anyone who’s thinking of self publishing is to get along to as many conventions as you can and talk to the many people out there who are already doing it. There’s a large community of extremely talented, friendly, and helpful people out there who’ll be glad to put you on the right track, whether you’re stapling together black and white photocopies or producing a full color 24 page comic to professional standards.

Thanks for talking to Amazing Stories!